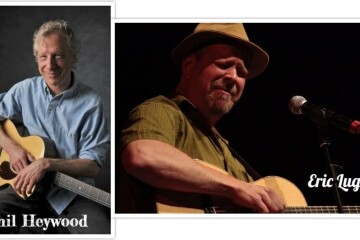 National Fingerpicking Champion Eric Lugosch has written arrangements of traditional songs and jazz standards that are now considered classics in picking circles, where he is also regarded as one of America’s best original fingerstyle composers. National Champion Phil Heywood plays fingerstyle guitar with a bluesy swing and a bucketful of whatever it takes to turn an instrumental piece into an arresting lyrical narrative.