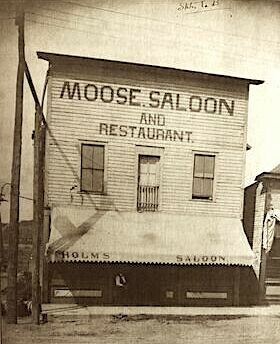 Dunlap Island was not an original part of Cloquet. In the late 1800s, the land on either side of the St. Louis River were owned by the lumber companies, which did not allow the sale of alcoholic beverages.  A man named William Dunlap saw an opportunity.  He bought the island from the Indians, reportedly for a sack of flour. He had it platted as the town of Dunlap, and opened it up for business.

By 1883, there were six saloons, two restaurants, and two boarding houses. The predecessor of the Northeastern Hotel was built in about 1885. At the time, Dunlap Island was reached by a foot bridge on the south side. Allen Niemi, in his “History of Cloquet” wrote:

“This bridge was made of two low booms with boards nailed crosswise. The predicament of the thirsty on the south side of the river, when the bridge was out of commission for running logs, might well be imagined. However, most of the men were trained woodsmen, and ‘running’ logs  to get over to the island did not present any difficulty.  But many were the dunkings they got coming back, where eye and foot did not coordinate any too well!”

The six saloons grew to a dozen when a bridge was built. It was not a place for respectable women or children. St. Louis Avenue, which followed the railroad track on the South side of the island was lined with bars, boarding houses and bordellos.

Recently, I wrote about Dunlap Island and the people who worked and played there in the 1950s. All of those people are gone now, of course, even the friends I played cards with. Woody Woodward died of a heart attack while he was driving his car. His bar passed through several hands before it quietly sank into oblivion when the last owners abandoned it, selling the property to the owner of the Northeastern Hotel.

In its later years it was known as The Foundry. It actually had been a foundry during Prohibition, while the Northeastern became an ice cream parlor.

Stella died in 1982. I suspect Tipper was gone by then, but Andrew stayed there until he died at the age of 94. My guess is that Stella’s sister made his meals for him after Stella died.

Stella’s daughter Dorothy, in her reminiscences  about growing up on the island, talked about playing with kids from seven different families.  Allowing for the four businesses and the Woodward’s, I assume there were at least two other single family houses on the island in the 1940s. Now there is only the Woodward house, home to at least the third generation of Woodward’s.

The bridge that led to Main Street, between Woody’s bar and the Northeastern has been replaced. The land on the south side has been fenced in, and claimed by USG Interiors, the successor to what used to be the Wood Conversion Company. The new bridge is a continuation of Broadway, the street that marks the eastern edge of the Historic West End, the oldest part of Cloquet’s business district. It passes the Northeastern Hotel’s parking lot on its way to the Spafford  Park Campgrounds on the north side of the island. It circles around the Voyageur statue at the end.

The locomotives still head out every morning to service what is now the SAPPI mill and the USG mill rail yards.

In the 1950s, there were four businesses along St. Lous Avenue: Stella’s Anchor Inn, the boarding house, Woody’s Bar, and the Northeastern.

The space which was once occupied by the Anchor Inn is now an overgrown empty lot. There is no sign that there was once a building there.

All that remains of the boarding house is a few charred timbers. It was used  for practice by the Cloquet Fire Department. It was the oldest building on the island, dating back to 1890, but it had been remodeled at least twice in its long life. It was originally the Moose Saloon and Restaurant, reputedly the site of the first Cloquet murder.

What was Woody’s bar now stands empty and ready for demolition. An addition which added a second story balcony was added in the 1970s. The addition may survive as a storage building.The only business left is the Northeastern Hotel, which is being restored, and is looking better than ever. There are stools and tables now. The same African mahogany bar  I saw in the 1950s is still there, but the spittoons are gone. Three of them still exist, but they are kept out of sight for now. They are brass, with rounded and weighted bottoms  so they can’t be kicked over.

The back bar is the same as it was, except cleaner. A painting still goes across it, now cleared of accumulated smoke.

The barroom is lit by many rescued beer lights, some advertising beers that no longer exist. Another rescued light hangs off the back of the building. It is from the Hub, once a popular bar on Cloquet Avenue.

The old hotel had 20 rooms and two bathrooms (men’s and women’s). Remodeling, which is continuing, has now cut the number of rooms to 11, with five bathrooms between them.

Plans are to restore the kitchen, and equipment for that awaits installation. It will concentrate on snack foods rather than the full course meals it used to provide.

At the turn of the 20th Century, businesses were lined up on St Louis Avenue. Fifty years later, it was down to four. Another fifty years, and the Northeastern Hotel is alone. The Woodward house is the only house on the island, and the only other building still used is the brick building on the campground which houses the campground office and showers and restrooms for the campers.

It’s hard to imagine the entire south side of Dunlap Island remaining empty, but it’s also hard to think of a business that could survive there. Customers would have to be drawn from Cloquet proper, since the campers are only present seasonally. A bar or another boarding house might make it, except they would be competition for the Northeastern.

Perhaps an antique store or a novelty shop?  Only time will tell. 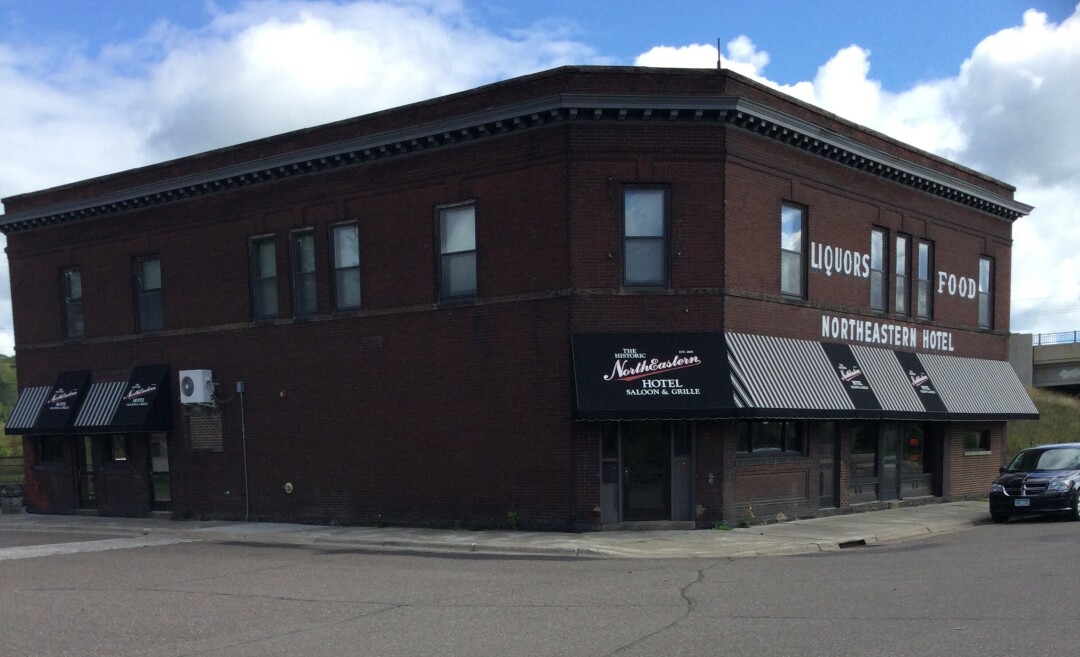