The Phantom Sniper strikes at Woody’s 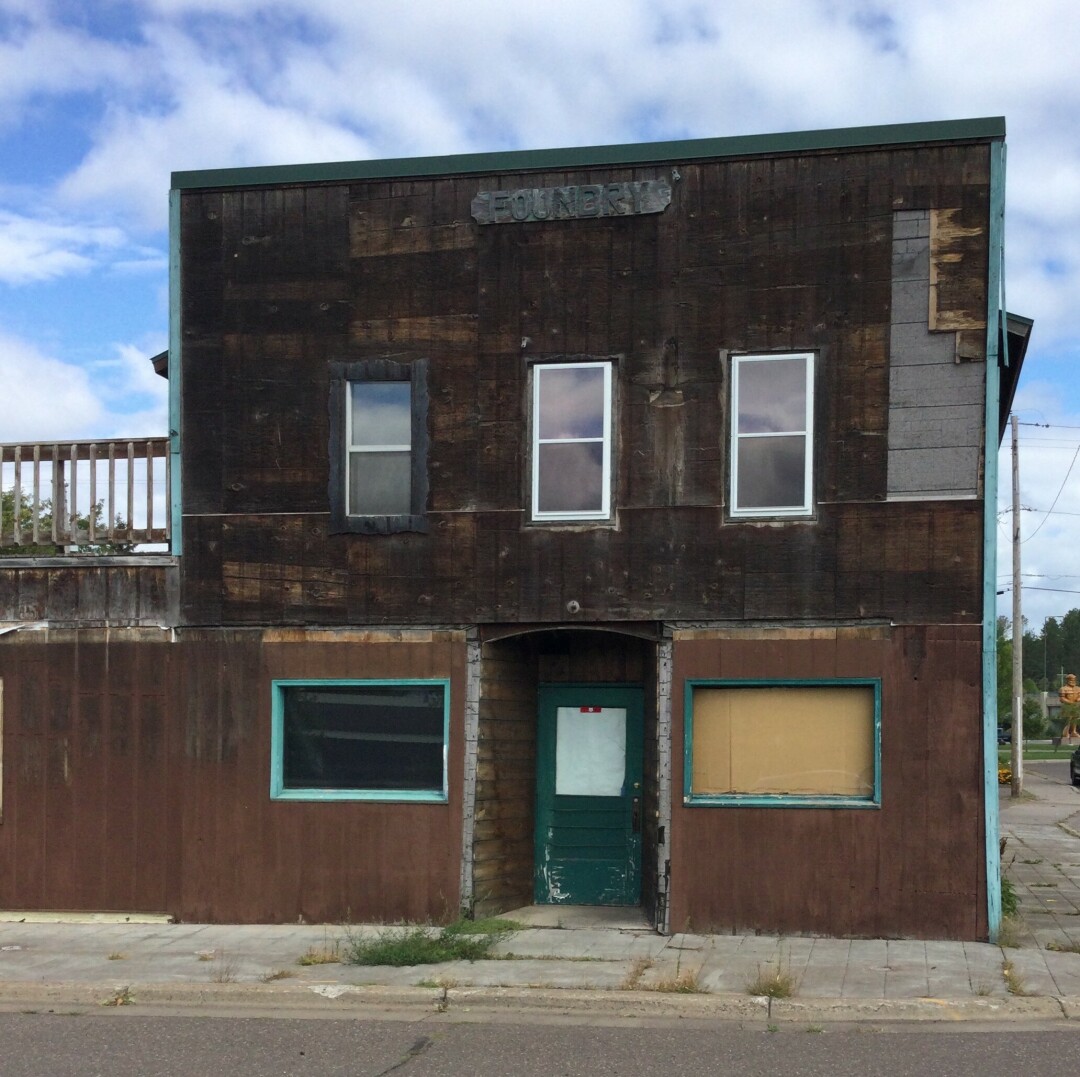 The remains of Woody's Bar with its last name, "The Foundry." It was a foundry during Prohibition.

It was the 1950s, and everyone knew about the Northeastern Hotel on Dunlap Island. It was a large brick building — one of those on the Island that had survived the Fire of 1918 and became a community asset, putting up survivors as a Red Cross Hospital, and having the Post Office work from their barroom.

The bar across the street changed hands two or three times that I knew of. The first name I remembered was Twaddle’s, then (I think) Marv’s, as in Goldberg.

Now it was Woody’s bar after Woody Woodward. Woody was a big, friendly and generous man, who was a friend to everyone he met. His clientele was composed mostly of old lumberjacks and railroad men who lived in the boarding house next door and at Stella’s place. (It actually was named the Anchor Inn, but everyone referred to it as Stella’s.) The Wood Conversion warehouse was just across the bridge, and it wasn’t unknown for warehouse workers to eat their lunch with a beer at Woody’s. A lot of Wood Conversion workers would stop there after work, also.

My friends and I drank mostly beer, so we didn’t get as drunk as some of the older men. Beer was 10¢ a glass. We would sit at a table and watch as men tipped over backwards off their stools, or slid down the bar to sleep on the floor. We called it the work of the Phantom Sniper. Some nights, the Phantom Sniper was very busy indeed.

We would eventually set up a table where we would play 8-handed, 7-point smear, taking turns buying pitchers of beer.

Once in a while, just for variety, we would step over to the Northeastern for a beer. The Northeastern at that time was a true man’s bar. There were no stools, just a brass bar rail that circled the bar, with an occasional spittoon. There were tables in the dining room which was off the back, but none in the barroom. I don’t remember any meals being served there, although I guess it happened on occasion. I just remember men playing cards at the tables.

The bartender was a man named Kiboy Grabowski, well known as a lightweight boxer by some of the older guys. He also played for a professional football team from Cloquet in the 1930s. Harry Newby was a running back for that team. They bought him a pair of silk pants so he could run faster. They played other pro teams from International Falls and Wisconsin.

Kiboy had been tending bar since at least the start of the Korean War. He recalled two guys that always drank Rock & Rye when they came in, so he ordered a case of it. Then they went into the Army, and when they returned, they were off the Rock & Rye. I found later that one of those guys was my brother-in-law’s older brother, and the other was Jack Parpala, whom I played golf with as well as being a member of my jam session group. He played the mandolin.

A railroad line ran from around the back of the Island. It led to the roundhouse, where the locomotives would venture out in the morning to head towards Saginaw and the Northwest Paper rail yards, delivering lime and soda ash for the recovery process, and taking an occasional turpentine car out to be processed as paint thinner.

When the movie “Iron Will” was filming in the area, they parked a locomotive outside Woody’s and showed the front of the building as a prelude to a barroom scene.There were two old buildings down the road from Woody’s: a big boarding house, and Stella’s Anchor Inn. The boarding house was recently used as a practice fire for the Cloquet Fire Department. They said it dated from 1890, and so would have been the oldest building on the Island.

We had absolutely the wrong idea about Stella, because the only time we saw her was when she had been drinking, and came to Woody’s and danced on the table. As a joke, we went to the Anchor Inn and ordered a beer. We didn’t dare drink out of her glasses, because we thought they would be filthy. As a matter of fact, I later talked with men that had gone to eat there, and they said her dining room was spotless, and her kitchen was clean as a whistle. We heard from many people that she was a tremendous cook.

I encountered two of Stella’s long-time boarders at Woody’s. The first was Andrew, who lived there for more than 40 years. He came into Woody’s and sat at the bar. Woody greeted him with a big “Hello, Andrew!” and reached for a bottle of whisky and a double shot glass. He filled the shot glass, and waited while Andrew drank it, then refilled the glass and put the bottle back.

Andrew put down his money and left without saying a word. “He’ll go to the Northeastern now,” Woody said.

The second boarder meeting was a little more dramatic. The midnight shift let out at 6:45 a.m. and we would often go to Woody’s from there. He didn’t open until 8 a.m., but he would be swamping out the place and would let us in the back door.

This morning, as we passed the front door, we saw a man lying between the screen door and the entrance door. He had a little layer of snow on him, so we told Woody about it. Woody went to the door, looked out and said, “It’s just old Tipper. He’ll be alright.”

Sure enough, when he opened the door  at 8 a.m., Tipper got up, brushed himself off and came in and ordered a shot.

Tipper was a big Indian man. His lower lip stuck out far enough to resemble a shot glass. As it turned out, he didn’t have to tilt his head back when he got the shot, he just emptied it into his lip.

I had heard that Woody was a bartender at the Northeastern when the bar next door went up for sale. I assumed that he had come from elsewhere in Cloquet before that, but actually he was a long time resident of the Island.

Stella had a beautiful daughter named Dorothy. She was very popular at school, and was elected Homecoming Queen. When she was younger, she had learned to play the accordion, and she formed a little band with Glenn Dunphy playing bass, and Woody Woodward playing guitar and singing.

Glenn played violin in the school orchestra, but he also played that most popular bluegrass fiddle tune, “Orange Blossom Special” at the talent show.

I had no idea that Woody played. They called themselves “Woody’s Little Shavers.”

Glenn would later own the bar for a time.

Next: Return to Dunlap Island 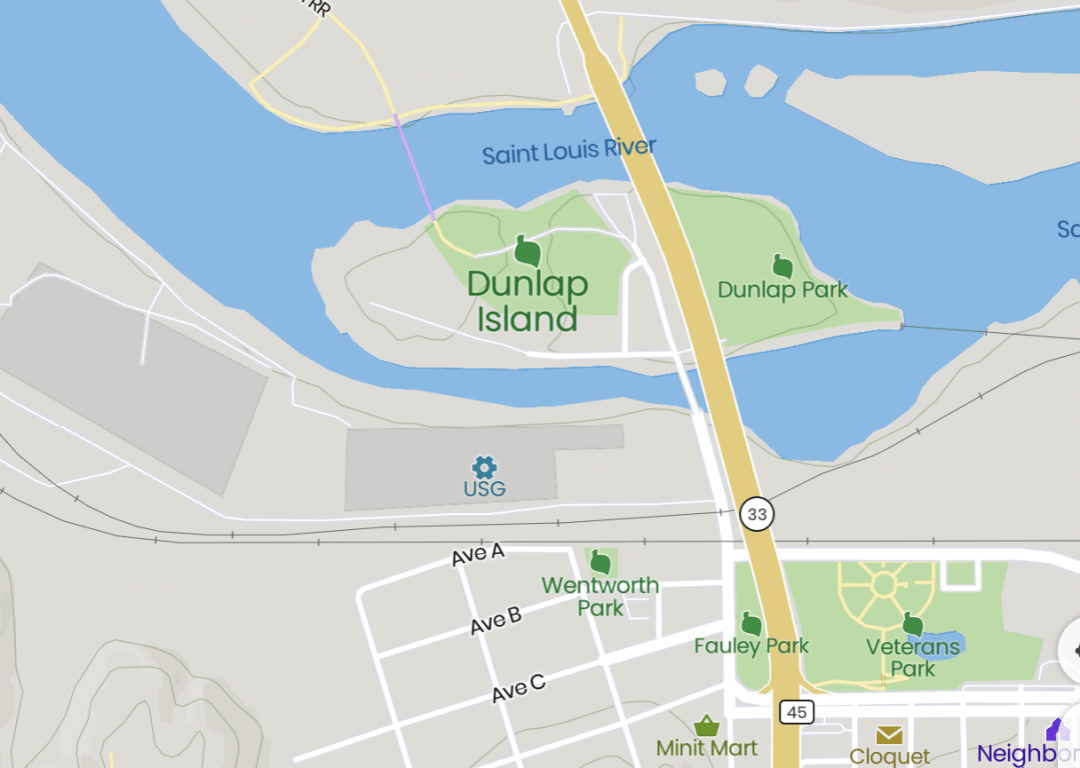