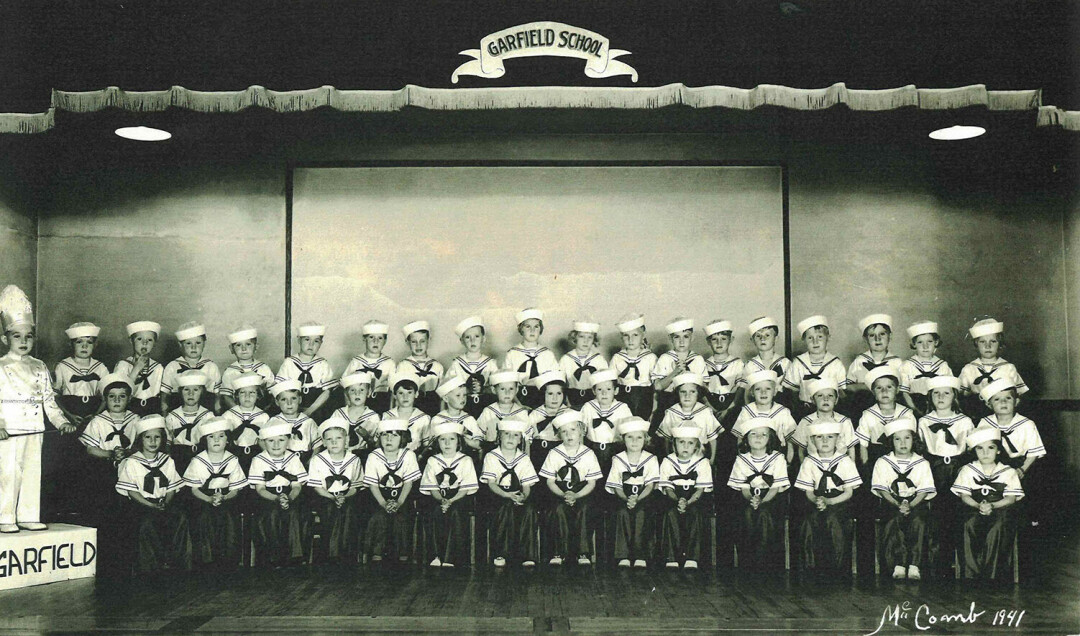 My editor has led a much more interesting life than me, and he has saved me from embarrassing myself with my faulty memory more than once. He recently showed off his memory with a 50-year old picture of his 6th grade class. I am going to show him that I still have a few brain cells left despite everything he may think. This is a picture of my kindergarten band from 1941, at Garfield Elementary School.

On the bandstand is Dr. Ricard Puumala. He wasn’t a Dr. then, of course, but both his parents were, which I think had a lot to do with him getting the job, I used to think this was the beginning and end of his musical career, but I have it on good authority that he later played the trombone in Cloquet’s Marching Band. I don’t know how well he played, but he DID deliver my youngest son, so I’ll try not to be critical.

The first girl on the bottom step is Sylvia Cope. They lived across from us on the Eastern edge of Cloquet when I was little, and my father was a friend of her father Jimmy. Later they moved closer to the school, and I went there to play with her and her older sister Ruthie. I was surprised to learn that my second wife, who grew up in the far Western side of Cloquet, also knew the Cope kids, and her father was also a friend of Jimmies.

The third kid up is Billy Juola, who grew up big and strong and a football star. He went on to teach school in Duluth. The fourth kid is Jimmy Klemovitch. He lives in Colorado, and has spent most of his life around racing cars. I chased around with him for a while post high school, but what I remember most was an invitation to jump on the Klemovitch beds while his dad was gone. I no sooner got my shoes off, and his dad came home and kicked us out.

The third and fourth girl from Jim are June and Joy Ann Nelson, twins who lived on 20th Street. June was the studious one, Joy Ann just liked a good time. The girl next to them looks like Joan Larson.

The boy third from Joan is Rodney Maki. I was a friend of his (I got invited to his birthday parties.) He could jump rope better than any of the girls.

First boy, second row is Wendy Fahlstrom. He called me from his home in Napa, CA this spring, talking about planning a class reunion for 1953, 54 and 55 Cloquet graduates. I agreed to help.

Next boy in the row is Jerry Warren, who was always looking for a fight. Twenty some years later, he was still looking. He added petty thief to his resume as a barroom brawler.

Second boy up from Jerry is Bob Mitchell. Bob Mitchell was my oldest friend. I went to his house to play with him and his brother Junior when I was 4. I had to cross Selmser Avenue to get there; Selmser wasn’t a very busy road, but my father worried about me crossing it. The problem was, Bob had a swing, and I didn’t. I think this is the reason my father put up my swing, now that I come to think about it.

Next to Bob, Art Skutevik, who was probably my best friend all the way through school, although I didn’t know him yet in kindergarten. Art’s parents ran a mom and pop grocery store four houses down from me. I most remember him because he cried when his mother dropped him off, and Bob and I felt superior as we choked back our tears on the first day of school.

Art died in his 60s; Bob is in better shape than I am, and is living in Esko. He was the only other person in this group that made it to Wendy’s tri-class reunion.

Three people down from Art is a curly headed kid, Dr. Harold Sheibe. He had Scarlet Fever when he was young, and missed a lot of school, but he caught up just fine. I’m proud to say he did pro bono work after he retired from his dental practice.

The second person from the end is Carol Juola (Bill’s cousin.) On the end is Delbert Bottilla, who lived across the street from me. We alternately played and fought until third grade, when his family moved to Esko.

First boy on the left in the back row is my lifelong friend, Jerry Joseph. Jerry lived by the railroad tracks, and we saved our pennies to get flattened by the ore mallets. I helped him install hydraulic brakes on his Model B coupe, and rode on the back of his Harley to the State Fair.

Larry Hoyt got into archery big time later in life. In 6th grade he was known for kissing girls without their permission or participation. Third boy up is Rodney Kupsc, who was always the strong, silent type.

The seventh boy is me. I must have been up to something by the look on my face. Next to me is Terry White, the Teacher’s Pet. He couldn’t help it. As much as I tried to lead him astray, and he tried to follow, he always was the Teacher’s Pet.

Ruth Ann Towslee was always the tallest girl in class. Also always ready for a laugh, and very friendly.

Ruby Rae Collins is next to her. I showed her around Potlatch Research (or "the black lab" as it was commonly called) when I worked there, and she remembered embarrassing things about me from grade school. I was glad when she got back on her motorcycle and rode back to Arizona..

Jean Lindholm, the last person I recognize in that row, always wore pigtails. She lived in a modest home on Carlton Avenue. her father was just one of many small, independent oil contractors in the city. He would end up absorbing most of the other contractors into Lindholm Oil, and then having a house and gas station designed by Frank Lloyd Wright. just as Jean was graduating.

Her older sister would marry the truck driver who would take over the business and the house. Jean moved to Sweden, married a Swede, and never returned for a class reunion.