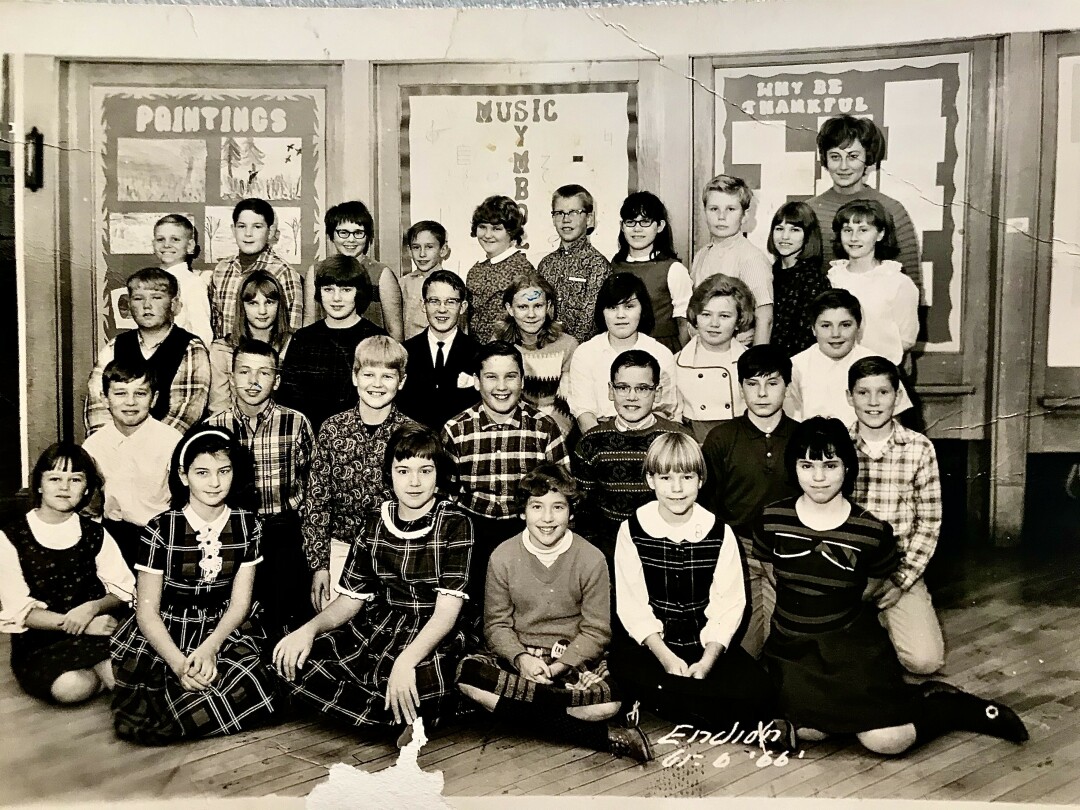 Last week Kyle O’Reilly wrote about his generation, Gen X. This week, I write about mine. Born in 1955, I’m from the dead center of the Boomer Generation.

What got me thinking about this subject is a recent find of black & white photographs while poking around in my mom’s basement. They included the 1966 photo at right, of my 6th grade class at Endion Elementary.

After finding my own smiling visage (first boy on left, 2nd row), I searched the bright, shining faces of my classmates to see what I could remember about them.

It’s been more than 50 years since I’ve seen this photo, yet some names immediately pair to faces.

There’s my pal Jim Ledyard, second row, third from left. We shared a sense of humor and got up to some shenanigans together. I think we also competed for the attentions of Marianne (first girl on the left, 3rd row). I can’t recall her last name.

I should know the name of the kid between me and Jim Ledyard, but I just can’t get it. The kid on Jim’s left is Michael Hribar, who I believe had a lawnmower accident that damaged a toe later when we were at Woodland Junior High.

In the first row the dark-haired girl in the plaid dress at left is Donna Ainsley. She was Marianne’s friend (why do I recall her last name and not Marianne’s? Donna’s brother Donald was in my Boy Scout troop).

At the right end of the first row is Diane Reimer. She lived in my 16th Avenue East neighborhood. The blonde girl next to her might be named Gretchen.

Dave Persgard, another pal, is behind me to start the third row.

Fourth row left is Donald Talbot, also a 16th Avenue East neighbor (hey, Donny, sorry about stuffing you in that dryer at the Chester Creek Laundromat; too bad you had gum in your mouth!). The third boy in the top row is Darryl (or is it Darrell?) something, I think. The next boy over in the glasses and ‘50s flat top is Todd Engstrom. The girl top row right is Diane Ellefson, and next to her is Gloria Petrushka (I took over her older brother Stanley’s newspaper route).

I also remember the name Margo Eggert, but I can’t put it to a face.

Oh, yeah, there’s also our teacher, mean Mrs. Gruber. I call her that because it still irritates me to think of how she laughed when I showed up for school in my new mod Carnaby Street outfit – pointed-toe shoes, sharp brown-with-yellow-stripe bell-bottom trousers and some sort of shirt/vest combo, all of which I had somehow convinced my mom that I really needed (I was totally suckered by the whole “England swings” thing that was going on at that time, and finally satisfied my jones for England by working my passage on a Norwegian tanker from Duluth to Liverpool when I was 18, but that’s another story).

I realize I’ve done a pretty poor job of remembering these people that I spent a year together with. While I continued on to junior high at Woodland with most of them, we pretty much all parted ways when it came to high school because I was in the Central district and most of them were in the East district.

And then leaving the city at 18 with the idea of having the kind of adventures that a would-be writer ought to have (I was a fan of Jack London at the time) led to a rather rootless life as a newspaper and magazine writer.

After nearly 40 years of living else-where, I came back to my hometown last year, a week before the lockdown, leaving behind friends in other places and starting all over again in the place where I was born.

And I guess that’s why I looked with such intent into the faces of these children who are my contemporaries. I wish I knew their stories. Where are they now? Did they have good lives? Did they stay planted here or did they find lives elsewhere? Did they achieve what they wanted? Or, like me, still working on it?

If any of my 6th grade classmates see this, I’d like to hear your story. It would, at least, be fun to put a name to faces. Reach me at info@readerduluth.com