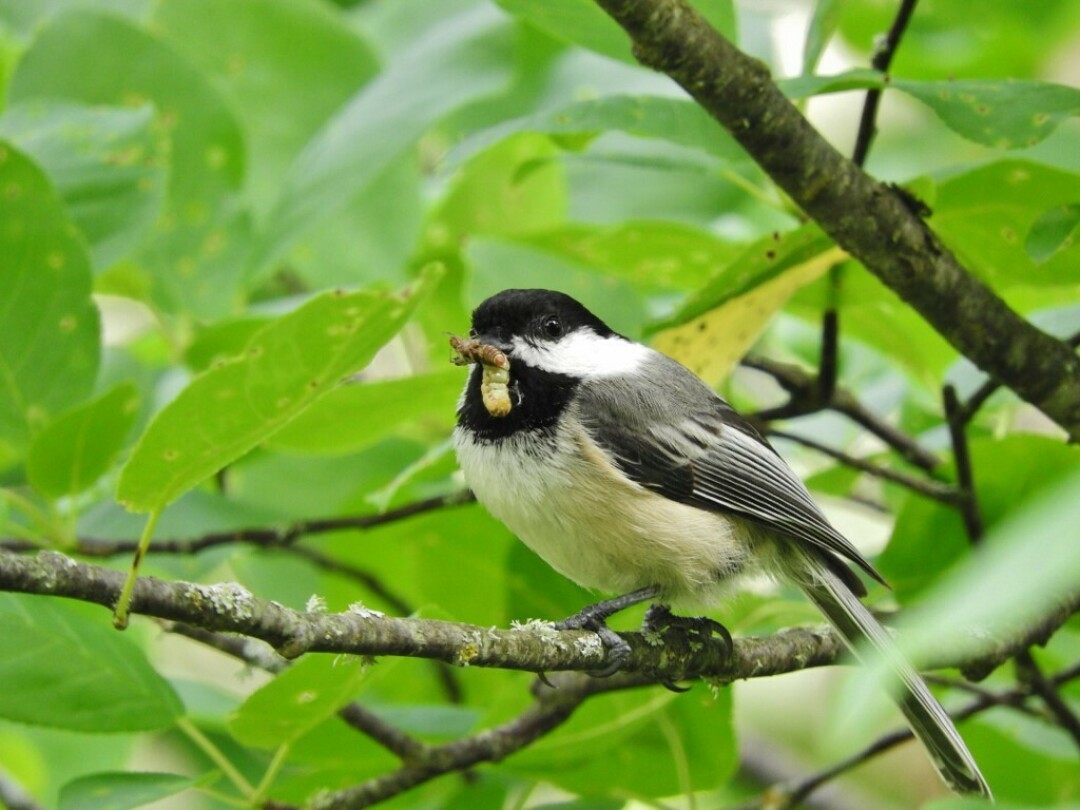 This black-capped chickadee has a mouth full of caterpillars ready to feed to a nest full of hungry chicks. Photos by Emily Stone.

“Check out these pretty moths!” The museum’s new office manager, Hayley Matanowski, poked her head in the office door as I was firing up my computer for the day. On the cool concrete patio were two moths with pink-and-white striped wings and fuzzy yellow bodies. As we each scooped one up for relocation, I noticed that even their legs were covered in pink fuzz.

After we released the moths into the shady trees at the edge of the museum’s outdoor classroom, I uploaded a photo to the SEEK app, which is useful for identifying all types of living things.

Rosy Maple Moth popped right up on the screen. When I posted the photos to Facebook, 11 people commented on seeing them recently. Believe it or not, their striking colors are good camouflage among the ripening seed clusters on maple trees, which are often tinged with shades of red and yellow.
My heart soared.

It’s not just that these moths are beautiful. They are an important part of our local food web, and I was happy to hear of these observations.

A few weeks ago, when I wrote about whip-poor-wills, I talked to Mike Ward, a professor at the University of Illinois. His words are still ringing in my ears: “Throughout the Midwest there are lots of birds that eat mainly moths and aren’t doing well.”

Moth numbers have gone down in many areas, and that’s bad for more than just the moths themselves. They are on the menu for many species of birds, bats, shrews, frogs, toads, spiders and other insects.
And that’s just the winged adults.

Moths begin their lives as caterpillars, just like their more visible cousins, the butterflies. Butterflies and moths are both in the order Lepidoptera, which comes from the Greek words for “scale wing,” but butterflies are classified into one subgroup, and moths fall into several. Moth species outnumber butterflies species 10 to 1!

The soft, juicy, caterpillars of butter-flies and moths are food for even more critters than their parents. As they munch on plants, caterpillars transform into plump snack packs that are full of fats, proteins and chemicals called carotenoids, which are the pigments that turn bird feathers yellow.

Even much-maligned forest tent caterpillars are food for 60 species of birds and 155 species of insects, plus frogs, mice, bats, reptiles, squirrels, skunks and bears. Nicknamed army worms for the way they march from tree to tree in a line, they are actually the larval stage of a drab, brown moth.

While groups of forest tent caterpillars are highly visible, there are far more caterpillars hidden away in the bushes than you might expect. 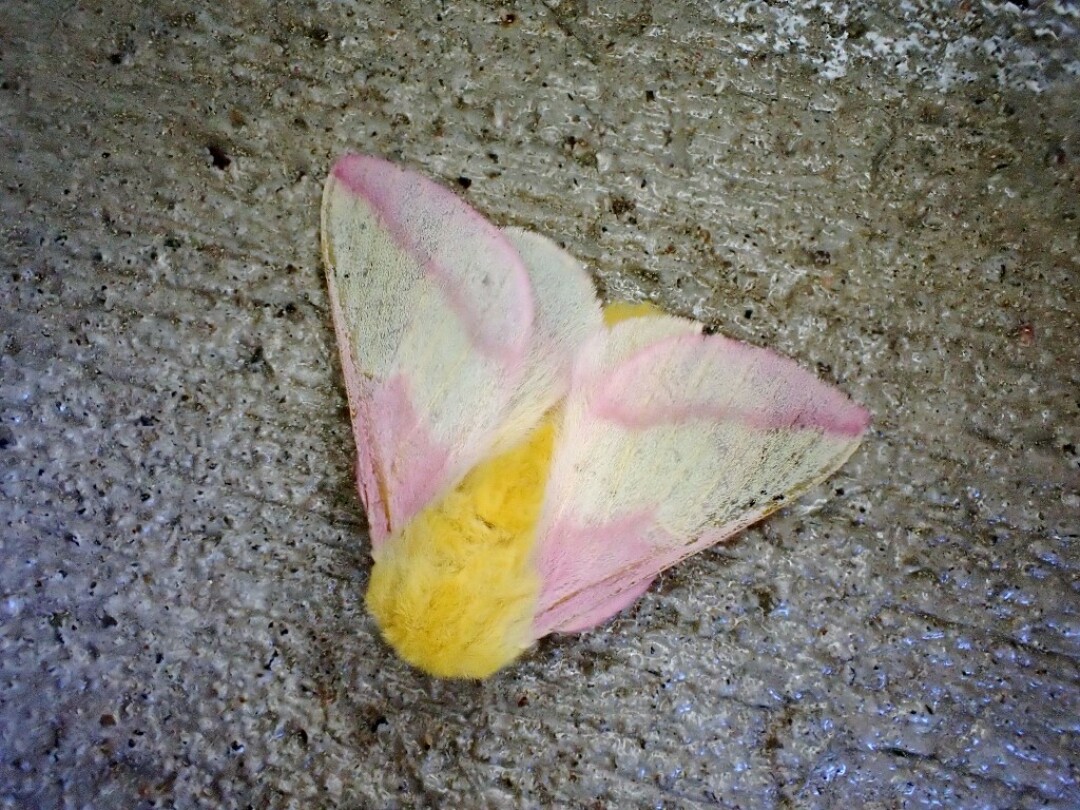 Chickadees know how to find them, though! With their super color-sensitive eyes, a pair of chickadees will nab between 6,000 and 9,000 caterpillars each summer, just to feed to their nestlings.

And chickadees are just one (adorable) example. Scientists estimate that 95 percent of nesting birds feed their babies insects, with caterpillars being a big part of that group.

At this point, I bet you’re wondering what you can do to help. Thanks for asking!

There are a few things you can do right in your own yard.

The first is to plant native flowers and trees. Native insects are closely tied to native plants. As hungry as baby birds are, caterpillars are even more ravenous.

Some caterpillars increase their body mass by 2,000 times between hatching from their egg and entering their pupa for metamorphosis to an adult. That takes a lot of food. And it has to be the right food.

Oaks, poplars, willows and cherry trees are host to a huge number of insects. But many species of cater-pillars require a certain type of plant. Monarchs and milkweed are a well-known pair.

I recently discovered the larvae of dogwood sawflies, on dogwood shrubs of course. On the other hand, most imported plant species don’t provide good habitat.

Many websites have lists of region-specific native plants that support pollinators, birds and other wildlife.

No matter how many native plants you have in and around your yard, if you also have bright yard lights that confuse the moths, bug zappers (which kill more moths than mosquitoes), and you use pesticides, you won’t be providing good habitat.

Treatments that claim to kill only mosquitoes can actually kill cater-pillars, bees and fireflies. That deprives the birds and other critters of their favorite foods and has impacts both up and down the food chain.

With the many environmental issues facing us today, making sure that my yard provides good habitat seems like an easy step in the right direction. I see timely and tangible benefits in the form of lovely native plants, cute caterpillars, pretty pink moths, and well-fed chickadees.

Together, the birds and I will sing the praises of moths and their caterpillars!

The Museum is now open with our exciting Mysteries of the Night exhibit.