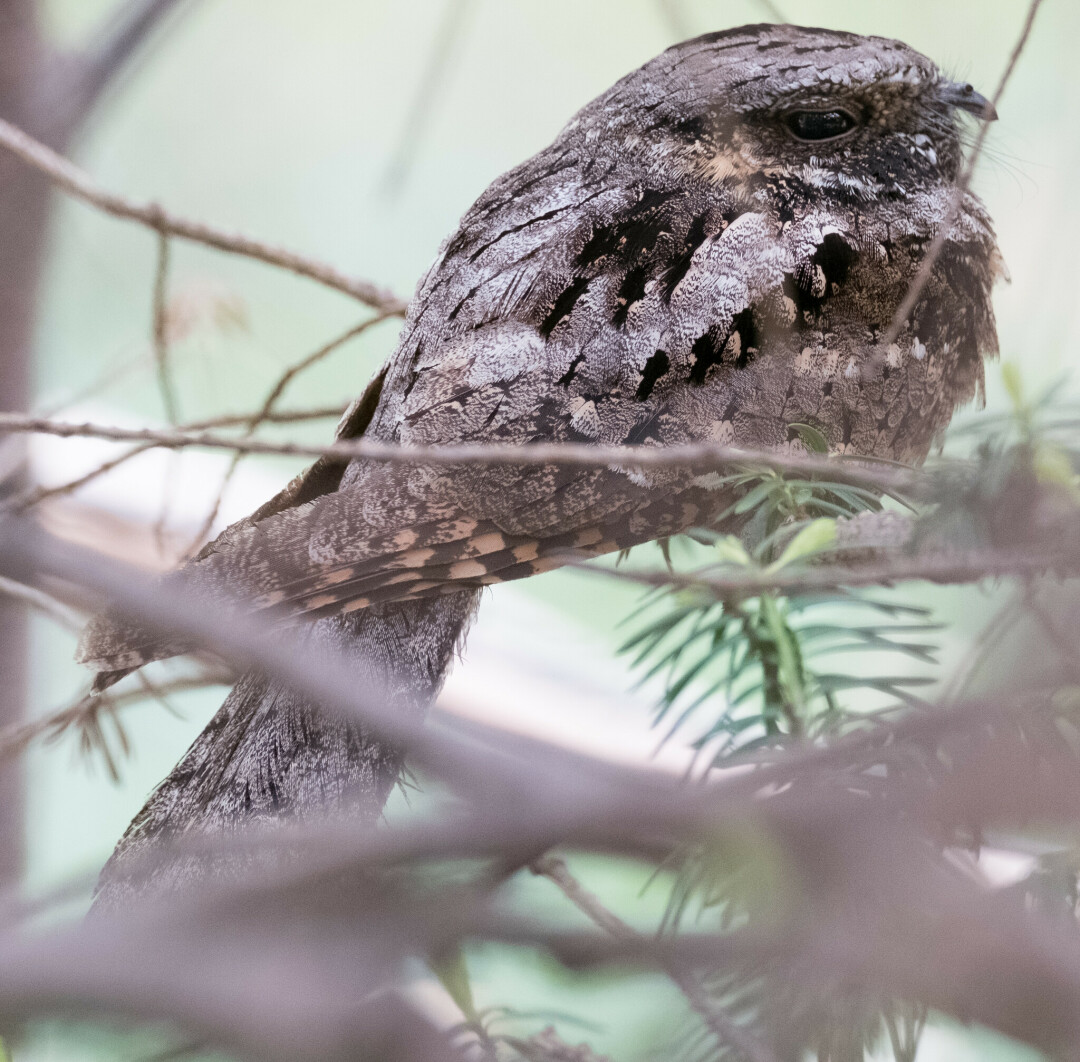 Eastern whip-poor-wills are extremely well-camouflaged and rarely seen. It’s likely you’ve heard one shouting its name, although maybe not recently as their numbers are declining. Photo by Mirko Schoenitz, posted to iNaturalist and used under Creative Commons.

The full moon was last week, and do you know what that means?
Well, full moons signify many things to many people, but to whip-poor-wills, it means they’d better get busy if they want to give their chicks the best chance at survival.
Whip-poor-wills time their egg-laying with the phases of the moon.
I’m typically skeptical of such fanciful claims, but this one has been supported by the research, and by common sense.
The brown-speckled birds become active only at dusk and dawn, and use the last and first light of day to spot insects silhouetted against the sky. Then they flutter up from their perch to scoop moths out of midair.
A full moon means more light to see by, and more hours with visibility for catching bugs, which they regurgitate for their young. So, by timing mating and the laying of their two eggs just right, whip-poor-wills schedule their chicks to hatch 10 days before the full moon.
Growing chicks will reach their hungriest stage just when the moonlight provides the maximum number of hours for foraging.
So if chicks need to hatch 10 days before the next full moon on June 24, and they need 19-21 days of incubation…let me count backward on my lunar calendar…that means that their parents likely mated just a few days before this recent full moon.
The extra light likely helps the female admire the male as he performs his courtship display.
It’s no wonder that Museum Director Deb Nelson came into my office recently and said “You should write about whip-poor-wills this week!”
“Have you been hearing them again?” I asked, already knowing the answer, since every spring since I’ve arrived at the museum, Deb has told me how much she loves listening to the whip-poor-wills call in the woods behind her home north of Cable, Wisconsin.
While their emphatic and incessant call may not be instantly recognizable, once someone has told you that they are saying their own name, it is certainly unforgettable.
Whip-poor-wills are known to call more frequently when the moon is at least 50% illuminated. This is useful information for the people who do breeding bird surveys and attempt to count whip-poor-wills on the landscape.
It makes behavioral sense, too, since a nightlight means more time to be active. Plus, a male whip-poor-will needs to throw all his energy into attracting a mate and defending his territory – two activities that require him to sing loudly – in the nights leading up to the actual act of mating. Which, by my calculation above, occurs just before the full moon.

After mating, the female lays two well-camouflaged eggs directly on dry ground in a shady patch of leaf litter. Building a nest would just provide a bigger target for predators to look for.
Once the chicks are about eight days old, they hang out exclusively with Dad, while Mom often starts a second nest.
“Why do they sing only at night?” was the next question that Deb posed to me.
It’s a good question, and one that scientists have many answers to, none of them definitive.
Maybe the birds prefer the quiet that comes with darkness. During the day, whip-poor-wills would have to compete with dozens of other bird species, plus wind noise and air turbulence.
Or maybe, since the gray-and-brown mottled whip-poor-wills spend all day hunkered down on a low limb or the ground – virtually invisible – calling during the day would alert predators to their presence and ruin their perfect camouflage.
Nighttime has fewer predators, and more things to accomplish. Whip-poor-wills do their courting at night, so it’s important for the male to conduct his vociferous flirting and territorial defense when the ladies (and competing males) are also out looking for love.
Every year, when Deb tells me about hearing her whip-poor-wills, my response is “Do you know how lucky you are?”
Just like the golden-winged warblers I wrote about last week, whip-poor-wills are an example of a common bird that is in decline.
In the past half-century, their num-bers have dropped by 75%. While they are still common in some places – like Deb’s yard and the Moquah Barrens on the Bayfield Peninsula – they have disappeared from other places. Nights are quieter now in my neighborhood between Cable and Clam Lake, and even in my parents’ patchwork of prairie and woods in northeast Iowa where whip-poor-wills kept me awake as a kid.

So what is causing their decline?
Mike Ward, a professor at the University of Illinois who has been geotagging Whips in the Moquah Barrens, emphasized the relationship between the whip-poor-will population and moths.
He knows it’s a strong connection, because in his words, “the birds give us a fecal sample when we tag them,” and that sample is full of moths. He also told me that “throughout the Midwest there are lots of birds that eat mainly moths and aren’t doing well. When I drive around the Barrens at night, my windshield gets covered with moths, but that doesn’t happen in other areas where the whip-poor-wills aren’t doing well.”

The connection extends to other birds (such as golden-winged warblers) who eat insects, too.
It’s inevitable that humans’ war on insect “pests” has impacts far up the food chain. If we get rid of all the caterpillars chopping away on plants, they can’t metamorphose into moths. And without moths, whip-poor-wills will have trouble feeding their young.
You can make a difference in your own backyard by preserving and restoring habitat, planting native species, spraying fewer chemicals, and leaving messy areas.
Together, we can help whip-poor-wills rise and grow like the waxing moon.

Emily Stone is the Naturalist/Education Director at the Cable Natural History Museum. Her award-winning second book, Natural Connections: Dreaming of an Elfin Skimmer, is now available to purchase at cablemuseum.org/books. Or order it from our friends at redberybooks.com to receive free shipping! For more than 50 years, the Cable Natural History Museum has served to connect you to the Northwoods. The Museum is now open with our exciting Mysteries of the Night exhibit. Connect with us on Facebook, Instagram, YouTube, and cablemuseum.org to see what we are up to.