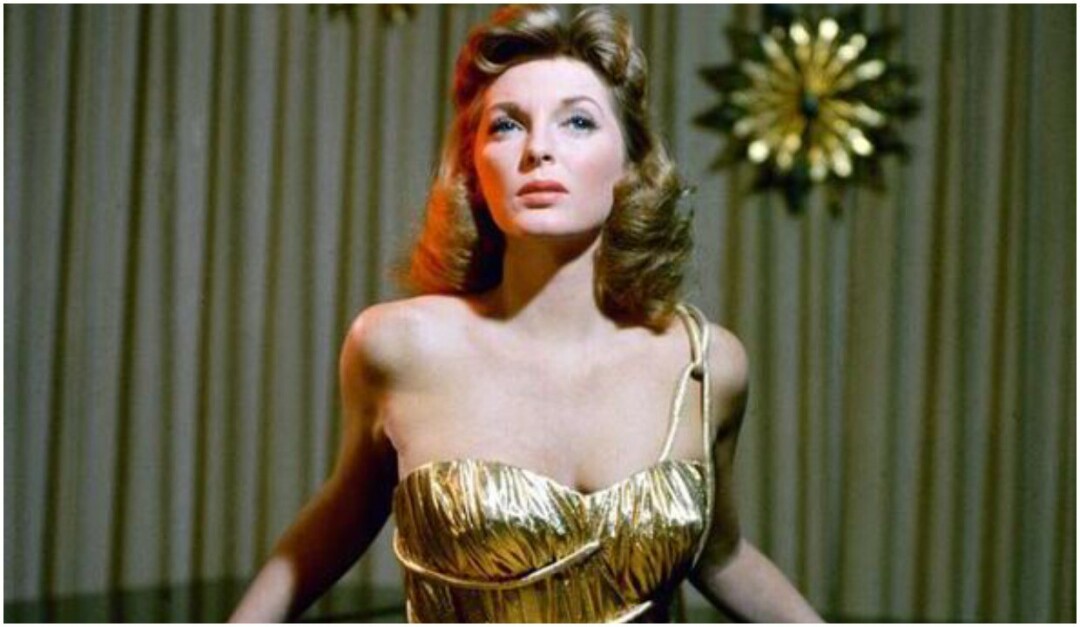 Those nosy editors came through last week even faster than I thought possible. These guys, with their magical abilities, answered my conundrum almost before the ink was dry.

So Boris the poet (April 22 issue) is not only the editor of the LA Review of Books, he is on a first-name basis with the poetry editor of the NY Review of Books, and he knows just how to butter her up for accepting his poem. I’m not suggesting a quid pro quo here, but I’ll bet a poem by her would now find favor at the LARB should she ever feel the impulse to write one.

Lola Albright is the lady in question, although he mentions a couple other women, too. Clearly, Boris made free use of his poetic license in describing her life, and now I’m left with another mystery. Where did he get the Chevy dealership and the broken hip from?

Jack Carson was a little paunchy, and she was married to him for six years in the 50s. The mystery here is why a beautiful and talented girl like Lola would briefly give up her career to stay at home with him?

I watched her sing “How High the Moon” on YouTube several times and enjoyed it very much. It’s the first thing that comes up if you Google Lola Albright. She sang in 38 episodes of “Peter Gunn.” She was not a failure as an actress by any means, either. She appeared in several movies and was nominated for an Emmy. She retired in 1984 and died at age 92.

The poem had also reminded me of Julie London, whom I had always liked, and I fortunately found her on YouTube, with a show she did in Japan. Just Julie, singing song after song, each one a classic, with lyrics that RHYME, my favorites.

As for Lola, I do remember there was a show called “Peter Gunn,” but in the 50s I was just out of high school and I had other things on my mind.

Shallowly, callowly
Post-adolescently
Driving my Chevy as
Free as a breeze.
Blind to my fate as an
Octogenarian
Losing my glasses and
Searching for keys.

My family is not particularly long-lived. Out of seven boys, only my father’s oldest brother got past retirement age. To be fair, the youngest was killed in the Normandy invasion and one died of cancer, but my father died of a heart attack at 52, and three brothers died in their early 60s of heart attacks.

So I retired at 60 and started putting my affairs in order. I was sure, based on family history, that I had less than a decade left to live, and I wanted to ensure that my wife, who had never balanced a checkbook in her life, would have the easiest time possible in paying the bills.

Some of my friends died in their sixties, and, had I been paying attention, I might have noticed that all the friends I had from work were gone by the time I reached 70.

In 1998, my wife got tripped up by her dogs and shattered her ankle. Up to that point, we had been comfortable with our two-story house. It was well equipped as a party house and we had some memorable parties in it.

The yard was encircled by a 6-foot fence. An extended covered patio came off the garage which connected to a metal building with a raised roof. In that building was a tiki bar, with a non-working ice cream freezer which held an 8-gallon keg nicely, plus a few six-packs and ice. The patio held a bunch of rattan furniture that matched the bar.

On Father’s Day, our friends would come over with their kids and a bottle of champagne. A cork popping contest was then held on the pathway behind the barroom.

I was playing in the band then, so my bandmates would come; musicians from other bands were also welcomed to come and jam.

There were three bathrooms in the house, which had a covered entry so you could walk from the back door to the garage without getting wet.

This stuff came to a screeching halt when I retired and the shattered ankle made a two-story house difficult to operate in.

In 2001, we moved into our present house, a brick single-story which was just down the street. We had always admired the house, and I set about remodeling the inside to accommodate our new situation. The laundry came upstairs, and I finished the basement so our son would have his bedroom and bathroom with shower. Thinking ahead, I put a urinal in there, too.

At this point, I certainly did not think of myself as middle-aged, but I was getting a sneaking suspicion that I had miscalculated somewhere along the line. I was also getting more absent-minded.

There’s the fridge, and there’s the sink,
There’s the stove –– now, let me think,
Behind me is the kitchen door,
But what did I come in here for?

Worse than the kitchen, I have sometimes found myself at the bottom of the basement stairs wondering what I had started to do. Until I remember, I can always busy myself by rearranging books. I usually have a few on my library table that need to be categorized.

For my 80th birthday, my granddaughter brought her four little girls up to give me a party. I was both delighted and dismayed. I couldn’t believe that I was actually 80 years old.

With my long life now in review
Mistakes –– I’ve made quite a few.
But I’m glad to report
With my memory so short,
I repeat them as if they were new.

I’m 85 now, and alone. My biggest problem, aside from trying not to shuffle when I walk, is in buying groceries and cooking for one. I have found that bread can’t be trusted beyond two weeks. Hormel makes some dinners for one, but there is never enough gravy on the mashed potatoes.

My advice to you is, go with Campbell’s chunky soups. I’ll bet you can find at least one that you’ll like.

Speaking for myself, I don’t like those large egg noodles in their chicken noodle soup. I much prefer the long ones in the small cans. Maybe that’s just me.