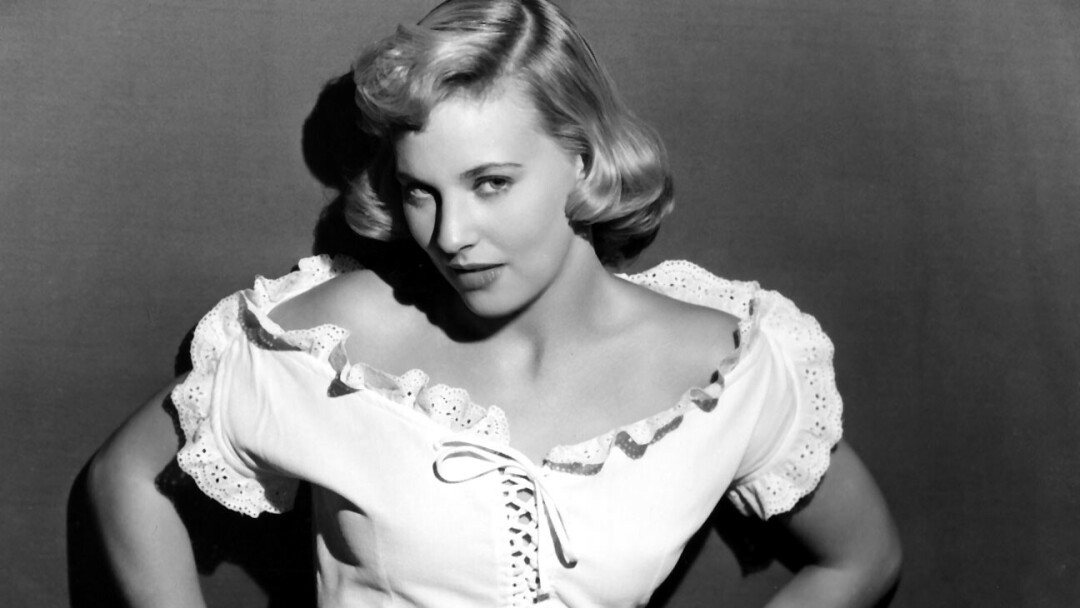 Nosey editor’s note: “Uncredited” is about actress Lola Albright, who starred in “Peter Gunn” 1958-61 and sang “How High the Moon” in season 1, episode 5.

Rather than a common theme, today I will set out some of the odds and ends that I have collected that don’t seem to fit anywhere.

The first is a conundrum. A conundrum is not even remotely related to a bongo drum, but, like the constant bang! bang! bang! it tends to keep me awake at night.

It is a poem, one of several sent to me by The New York Times Review of Books to get me to resubscribe. Remarkably, this actual poem slipped by the poetry editor, who somehow failed to notice that — horror of horrors — there are lines that RHYME. (The author is the editor-in-chief of the Los Angeles Review of Books, so he had the credentials, or connections, to sneak by.)

It is called “Uncredited” by Boris Dralyuk:

No breakout leads — a prisoner of reruns
on local stations high up on the dial:
a stray recurring role, a guest appearance
on “Perry Mason”, Later, “Rockford Files.”

Her second act? Pure dullsville in Van Nuys,
Chablis with ice. A Chevy dealership
gone belly up. Her paunchy husband lies:
a broken marriage. Then a broken hip.

None of that matters, if you ever catch her
singing “How High the Moon” — silvery, misty —
on that one show … She isn’t any match for
the stainless Julie London or June Christy,

but through her gauzy voice, as through a sieve,
spare notes of heaven reach you from afar,
For those two minutes, she’ll make you believe:
Somewhere there’s music, it’s where you are.

I know this is about a real person. I suspect I might recognize her name, but my search for it ended in a brick wall. I am counting on my editors, who, being journalists, are as nosey as all get-out, and, most importantly, know how to LOOK THINGS UP, and so will figure this out so I can get back to sleep.

I know I met this guy at the Chicago airport: the person who is always trying to get you to follow The Enlightened One is known as the Buddha pest.

Here’s a limerick about limericks:

The limerick packs laughs anatomical
Into space that is quite economical.
But the good ones I’ve seen
Hardly ever are clean
And the clean ones so seldom are comical.

And here’s a couple from my friend Jerry, whom, I mentioned previously, can’t resist a pun, and will go to great lengths to deliver one:

A hard-working, toy-making elf,
Got cut as he fell from a shelf.
With no workers to spare
Santa said in despair,
“You’ll just have to suture yourself.”

A buxom young lady named Kate
Wore a 10 button blouse on a date.
She had so much fun
When 2 came undone,
After that, she would just fascinate.

ECONOMICS 101:
1. The economy is driven by consumer demand.
2. Poor people can’t afford to buy what they need.
3. Raising the minimum wage lets people buy some of what they need.
4. This increases consumer demand for goods and services.
5. The economy improves, business prospers.
6. Corporate executives take credit for increased business.
7. Poor people still can’t buy everything they need.
8. Executives get obscene raises for increasing business.
9. The trickle down chute is still plugged.

One of the first books I reviewed was a Terry Pratchett novel called “Eric,” featuring the inept wizzard (sic) Rincewind. I have stated since then that although I was not crazy about Pratchett’s stories about the witches of Lancre, I was of the opinion that the stories involving Rincewind were ones I would probably like. I have finally come to one which actually does contain a lot about Rincewind, but was a little too muddled for my tastes. It’s called “The Last Continent,” and is (I think) about the construction of the Australian continent by a god or gods, as the case may be.

I may have enjoyed it a little more if I knew just a smidgeon more about Australia. I suspect some of the text is based on aboriginal Dreamwalking creation myths, as well as some other Australian folklore, or wherever that story about the man carrying the universe in a gunnysack came from.

In any case, the only funny part I can remember is the description of the guy who was so naive that he didn’t discover until he was forty that oral sex didn’t mean talking about it.
And I leave you with this shocker from Jerry:

There once was a man from Nantucket
Who brought out a shirt called U-Tuck-It,
For a very fat boy
It engendered great joy,
And as for his belt — he could chuck it.

Not great, but this is probably the only clean limerick in existence that involves a man from Nantucket.