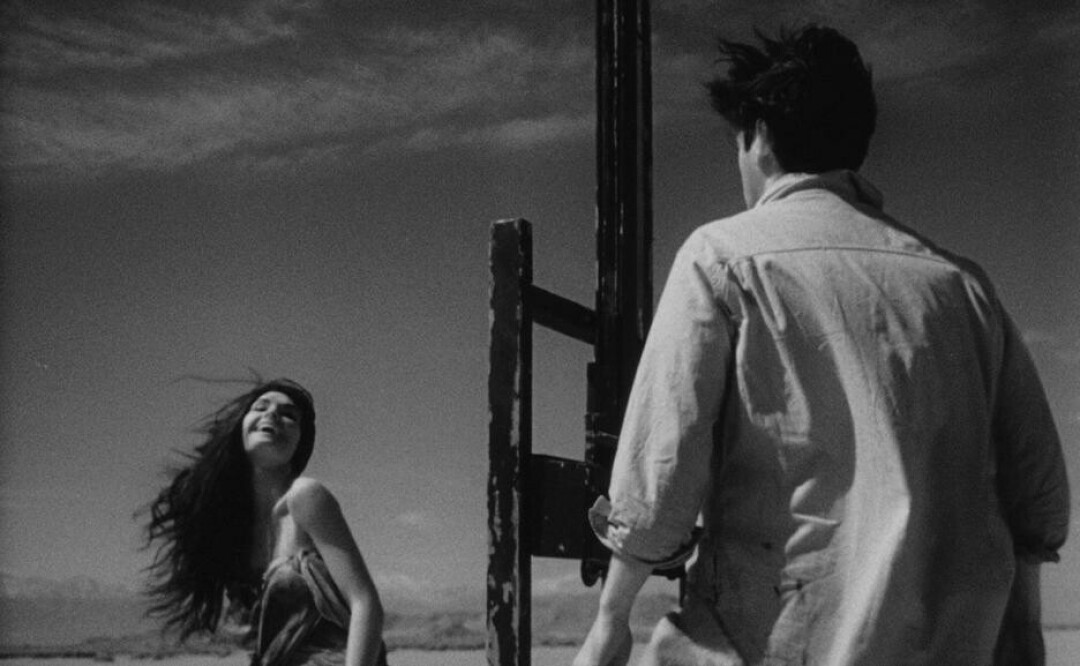 On a recent cold Friday I night, I felt like a horror marathon. But something different.

Since it’s Women’s History Month, how about a marathon of horror films directed by women in the 20th century? Why that final caveat? Well, there are plenty of horror films by women in this century (you can look it up), but I was having trouble thinking of a single female-directed horror movie of the last century. Certainly there are some, but I would have to go digging.

I fully expected to find horror films by women going back to the silent era, but that is not the case. To my great surprise, reference after reference pointed to the 1966 vampire film Blood Bath, co-directed by Stephanie Rothman, as the first in the genre by a woman.

I might like to stretch the point, then, if that is in fact the first. Although technically defined as a film noir, Ida Lupino’s 1953 The Hitch-hiker is as horrific as it gets, especially so since it is based on the real life killing spree of Billy “Cock-eyed” Cook, who Lupino interviewed in San Quentin before he was executed for his crimes.

But since I already touched on that film a couple of months ago, I will begin here with Blood Bath. 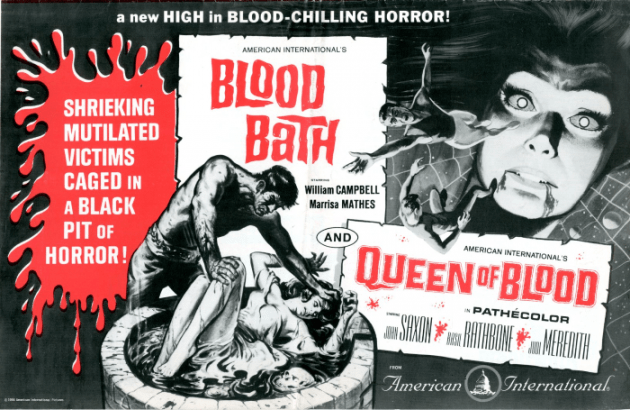 Rothman came to Corman and AIP after graduating with distinction from the University of Southern California filmmaking program, including being the first woman to be awarded the Directors Guild of America fellowship for a student film. She was hired as Corman’s assistant, which she has said in interviews included a bit of everything required to make films – scout locations, cast actors, write new scenes, direct new scenes, edit final cuts.

Her directing credit on Blood Bath tells an interesting story of how Corman operated. In this case, Corman had inherited what has been described as an unintelligible Yugoslavian tale of espionage that featured American actor William Campbell and English actor Patrick McGoohan (Secret Agent and The Prisoner).

Corman first hired Jack Hill (who the following year in 1967 would release his epic Spider Baby) to add scenes that would make it a proper AIP vehicle. Hill introduced a Beatnik art element to the plot that sort of ties in to the Campbell character and provides some comic relief. The beatniks include Jonathan Haze, who starred in the 1960 Corman classic Little Shop of Horrors, and the always reliable Sid Haig, who would go on to star in Spider Baby in 1967.

Not satisfied with Hill’s revisions, Corman then turned the project over to Rothman, who added the backstory of Campbell being the embodiment of a medieval vampire in modern-day Venice, California. She also added the lengthy and intense pool drowning scene. 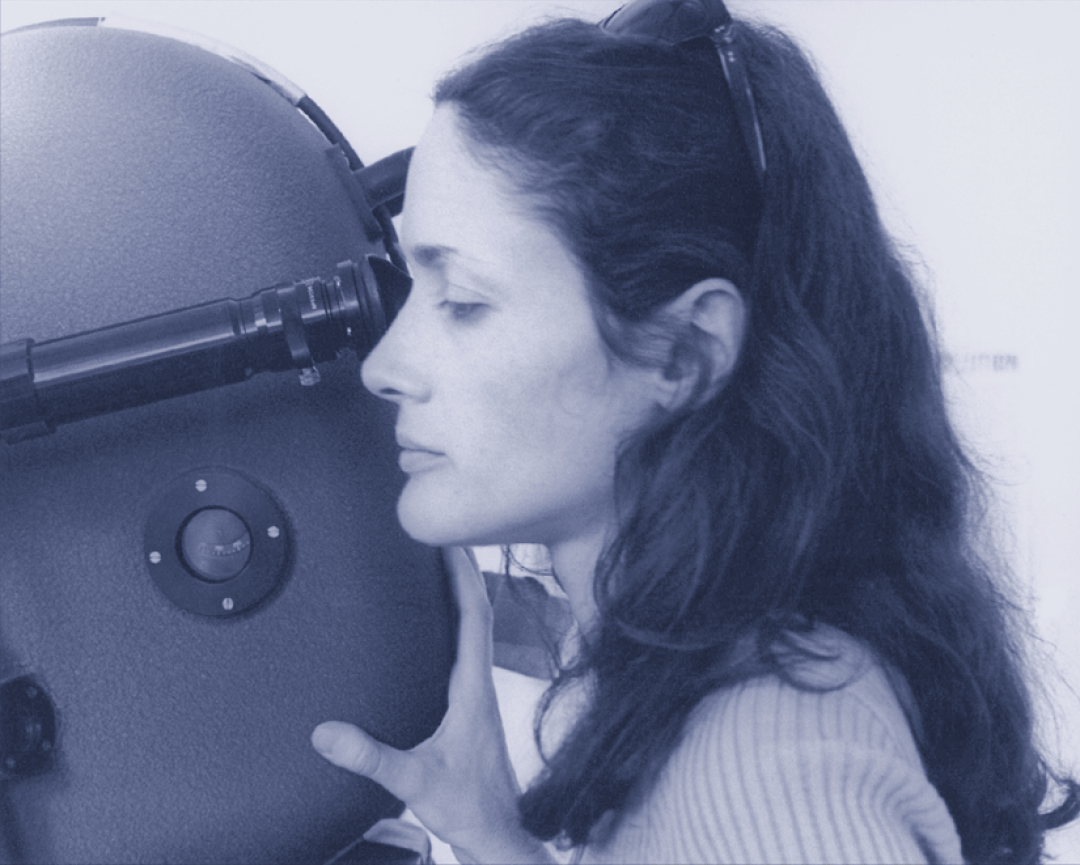 So, if Blood Bath seems to be a mishmash, it absolutely is. It’s bizarre and there are weird scenes that don’t make much sense. But ...

Patrick McGoohan’s character from the original Yugoslav production is retained for the opening sequence, which features a shadowy character bobbing and weaving his way through the dark and labyrinthine passageways of an unnamed medieval city until coming upon a buxom blonde just standing in the middle of nowhere.

The male figure quickly subdues her, and as two perambulators approach, he throws the body into a conveniently located Triumph convertible, hops in the driver’s seat and pretends to be making out with the woman. The couple stop to admire the smooching pair and then leave. As they leave, the camera gives us a first look at the character in the car. It is Patrick McGoohan wearing vampire fangs.

That is the last time we see McGoohan in this movie. A doughy, puff-faced fellow was hired to portray McGoohan’s character, who is Campbell in his vampire mode.

Why does another actor play Campbell in his vampire mode? Don’t know, but it’s goofy good fun if you know the background, and an excellent way to kick off this marathon.

A few years later, in 1970, Rothman would make the wildly successful The Student Nurses, and followed that in 1971 with The Velvet Vampire. I hoped to watch that next, however was unable to find it on any streaming option. Doesn’t mean it won’t appear at some time, but I might have to look elsewhere if I want to see it soon.

While looking up information on Rothman, who was inspired to become a filmmaker by Ingmar Bergman’s very serious 1957 The Seventh Seal, I found this recent quote from her: ”With all the options that exist today, if I were beginning my career as a filmmaker I would not choose to make exploitation films.”

I skipped ahead a couple decades, to 1989, for Stephen King’s Pet Sematary, which was directed by Mary Lambert.

I had to look her up, and learned that she is probably better known for directing four iconic Madonna videos – “Like a Virgin,” “Material Girl,” “Like a Prayer” and “Borderline.”

Turns out she turned down an offer from Steven Spielberg to edit E.T. in favor of directing Pet Sematary.
And I suppose this is something to be proud of, in a way – in 2011 she became the first female director of a SyFy Channel original movie, Mega Python vs. Gatoroid (or is that just a giant sharknado around one’s neck?).

Yes, this is my first time seeing the 32-year-old Pet Sematary. I’ve tried a few of King’s books, and I’m not a fan. Just way too much detail for me. I really don’t need to know that so-and-so had Campbell’s Chicken Noodle Soup for lunch at noon-fifteen. Also, I don’t believe the way some of his characters talk. Too writerly. Not natural.

So, naturally, I haven’t seen many of the filmed versions of his books. Carrie, The Shining and Salem’s Lot are all I can think of. But I was ready to approach Pet Sematary with an open mind, and pretty early on I was happy to see good old Fred (Herman Munster) Gwynne. Sometimes just seeing a face you know gives you more confidence in the movie.

It has its creepy moments – the spinal meningitis victim Zelda, played by a man (Andrew Hubatsek), and the scalpel-wielding toddler. For me, the scary toddler was worth the price of admission.

King himself has a brief cameo as a fire-and-brimstone preacher. He looks appropriately crazed.

While I enjoyed Lambert’s take on King’s story, it did not inspire me to read the book or see the 2019 remake of Pet Sematary.

I finished the Friday night marathon with Marina Sargenti’s 1990 Mirror/Mirror, which, coincidentally features another Munster, Yvonne (Lily) DeCarlo, who serves as a subplot that sometimes is forgotten and then suddenly reappears. She has a very bizarre closeup scene of eating takeout that makes you wonder what everyone involved was thinking.

It also features genre fave Karen Black as a lost soul mother to a shy teenage goth who looks like a cross between Boy George and a patently obvious ripoff of Winona Ryder’s character in Beetlejuice, played by the actress Rainbow Harvest.

This movie veers between Valley Girl teen drama and supernatural horror emanating from the titular “character.” The high school drama nonsense you’ve seen a million times. Of course Goth Girl, newly arrived to the unidentified community from Los Angeles, is bullied by the cool girls, something they will not live to regret.

If it sounds suspiciously like Carrie, well, Sargenti references it when the head bully tells her boyfriend when he complains about her relentless pursuit of Goth Girl that “It’s not like we’re going to throw pig’s blood on her.”

There’s a gruesome scalding scene in a shower that goes on for too long, and when Goth Girl mates with the demon in the mirror, licking at and smearing herself in blood dripping from the mirror, ugh!
The always creepy William Sander-son shows up as a welcome peripheral character with not too much to do, a representative of the Happy Valley Pet Cemetery who has come to bury a dog killed by the demon mirror, and ends up becoming Goth Girl’s mother’s lover.

There are enough gratuitous scenes of female pulchritude to make you think this must have been directed by a man. But on a second thought, women and girls are the leaders in this movie. All the men and boys seem like ineffectual sidekicks of the women.

Sargenti’s movie was successful enough to spawn three sequels, two of which were also directed by women.

While I am not a fan of slasher films, I was disappointed that I was not able to add Amy Holden Jones’ 1982 Slumber Party Massacre to my marathon. Just could not find it available through a streaming service.

I was curious about it because the screenplay was written by feminist author Rita Mae Brown as a parody of the slasher genre, but was shot as a straight horror film. It spawned two sequels, both of which were directed by women.

A couple of films that fit the bill but I was not able to squeeze in:

• Kathryn Bigelow’s 1987 debut, Near Dark. In another take on horror, you could also add her 1991 Point Break (Keanu Reeves, Patrick Swayze and Gary Busey together – oh, the horror!).

• The 1980 Corman production Humanoids from the Deep, directed by Barbara Peeters.