The first film noir directed by a woman 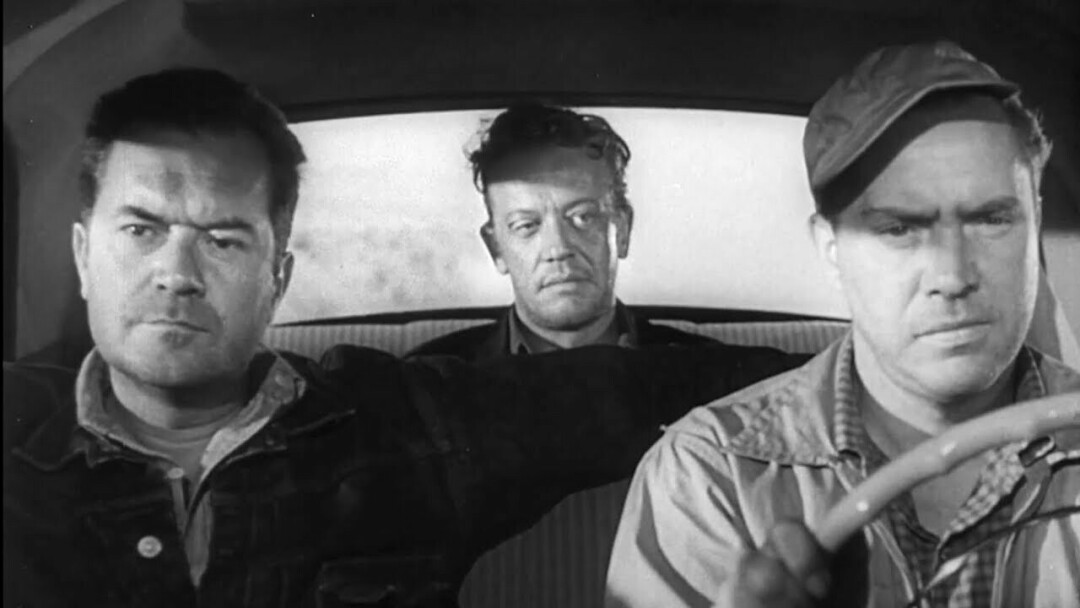 Back in the bad old days before streaming made almost any movie imaginable available for viewing at your convenience, I kept a long list of films noir that I wanted to see.

Whenever one might appear on late night television or through the always-reliable Criterion Collection, I could check it off the list.

Several were at the top of the list because something about them had fired my imagination, such as Robert Aldrich’s Kiss Me Deadly (1953), a convoluted Mickey Spillane/Mike Hammer tale that upon release was declared “designed to ruin young viewers”; a rare London-based effort in Jules Dassin’s Night and the City (1950); the Dalton Trumbo-scripted Gun Crazy (1950) – a blacklistee, Trumbo wrote this and many other screenplays under a pseudonym.

Also at the top of the list was The Hitch-Hiker. Besides reading that the 1953 release was a particularly tough and tidy film noir, it also intrigued me because it broke ground in two significant ways.

First, it was directed by Ida Lupino, best known in Hollywood as an actor who had more than 50 movies and hundreds of TV shows to her credit. But directing The Hitch-hiker gave her the historic role of being the first woman to direct a film noir, which is one of the great American contributions to cinematic art.

Second, it is the first time a movie depicted the true-life events of a serial killer. The Hitch-hiker is based on “spree” killer (that is the name they used at the time) Billy “Cockeyed” Cook, who killed six people while hitching from Missouri to California. Before being executed in San Quentin in 1952, Lupino interviewed Cook in prison for insight into the character she intended to put on the screen.

In  the late 1940s Lupino and her husband at that time, Collier Young, formed a production company – The Filmakers – to make low budget, issue-oriented movies, movies that show “the way people actually live in the world and the problems they must meet and overcome.”

Not Wanted, their first film, is about an unwed mother. Veteran director Elmer Clifton, who started in the industry with D.W. Griffith in 1917, was chosen to direct Not Wanted. When he suffered a heart attack during filming (he died shortly after the film’s release), Lupino took over in the director’s chair. That was the first of eight films she would direct (see sidebar).

The Hitch-hiker is easily the most accomplished of her films. It’s a taut, tough, tense and succinct 71-minute study of evil. Knowing that it’s based on fact makes it even more intense.

The film opens with a preface that begins: “This is the true story of a man and a gun and a car…”

Then the titles are rolling and the titular character, his face unseen by us, hitches a ride, and then kills and robs the poor folks in the Dodge who stopped for him.

Then we see headlines telling of the nationwide search for the hitch-hike slayer, ex-convict Emmett Myers (played by William Talman). We see his malevolent face for the first time on the front page of a newspaper, with his droopy right eye that emulated the paralyzed eyelid that earned Billy Cook the nickname Cockeyed.

Without comment, he continues to hitch rides and kill, until he runs out of gas in a stolen car and is picked up by the two Everymen played by Frank Lovejoy and veteran film noir actor Edmond O’Brien (The Killers, White Heat, D.O.A.), who are heading to Mexico for some fishing. In the true Cook story, his last ride was with two men who were going hunting.

Talman hops in the back of the car but still we don’t see his face. It’s cast in deep shadow, until he pulls a gun on the two and thrusts his face forward to tell O’Brien to keep driving.

From then on, Talman relentlessly bullies the two men, especially O’Brien, at one point sadistically shooting a can out of his hand and forcing Lovejoy to do the same. 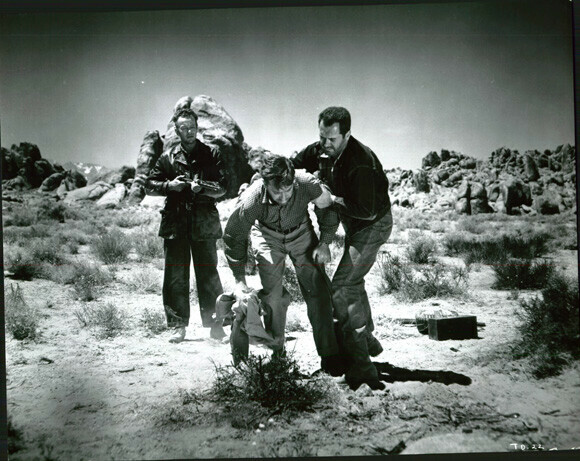 Talman is perfect in this role, the very epitome of evil. Whatever humanity he had been born with had been extinguished long ago.

Just a few years later Talman would gain fame in the continuing role of perennial loser District Attorney Hamilton Burger in the weekly courtroom battles with unbeatable defense attorney Perry Mason, who made hamburger of his often belligerent opponent each week.

Talman is completely believable here as a murdering maniac. He seems so off kilter that you expect one or both of the fishermen to be dispatched at any moment.

A tormented, insistent trumpet leads the charge in the driving scenes through the interminable desert of scrub brush, rocks and sand.

Talman’s bullying manner makes it easier to accept an unusual thing about this movie – you do not see the macho displays you expect to see in American movies. These two friends are deathly afraid of the lunatic traveling with them through the empty Mexican landscape so far from their normality. Their fear is so palpable as they drive with the volatile killer aiming a gun at them you can almost smell the sweaty fear.

In one particularly cruel scene, the men are camping out and Talman explains that because of his paralyzed eyelid, the lid doesn’t shut when he sleeps, so they can never tell if he’s asleep or awake. Lupino makes sure to give us shots of the creepy open eye.

As a film actor, Lupino almost always dominated the screen with her presence. She had that star quality that makes you keep your eyes on her, maybe because she seems so damn human. She never exhibited the machinations of acting.

Lupino grew up in a British theatrical family, and wanted to be a writer, but enrolled in the Royal Academy of Dramatic Art. She made her film debut at 14 in 1931 and had her first starring role on stage in 1934. 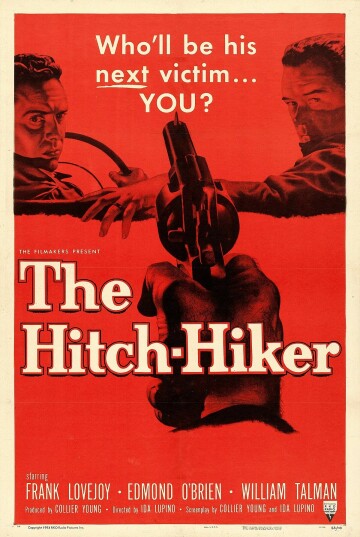 She was typecast as a bad girl in a series of films for the British subsidiary of Warner Bros., earning her the title of “the English Jean Harlow,” the bleached-blond bombshell of the 1930s. Paramount brought her to Hollywood in 1933 with a five-year contract.

But in 1934 she contracted polio and Paramount released her. While recovering, she took to her first love, writing and composing music. In 1937 the Los Angeles Philharmonic Orchestra performed her “Aladdin’s Suite.”

Returning to the movies, she reportedly took on so many roles that had been refused by Warner Bros. star Bette Davis that Lupino called herself “the poor man’s Bette Davis.”

She moved to Warner Bros. in 1940 to make They Drive By Night with Raoul Walsh. I always liked the story of her suspension by autocratic studio head Jack Warner, when she refused to play opposite Ronnie Reagan in his 1942 breakthrough role in Kings Row, the movie that gave him the title for his 1963 autobiography Where’s the Rest of Me?

While suspended, Lupino turned her attention to the filming and editing process, and, quickly, a director was born. 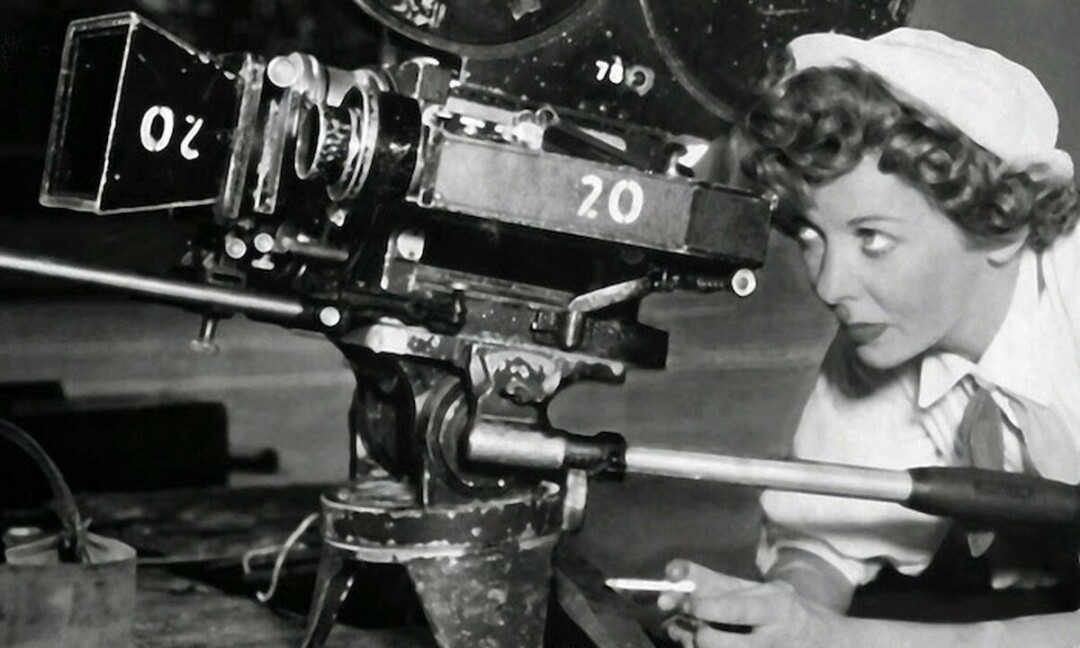 A suspension for refusing a Warner Bros. movie caused Ida Lupino to turn her curious mind to the duties of those behind the camera, and eventually led to her becoming a groundbreaking film and TV director.

She and then-husband Colliet Young formed a production company called The Filmakers in 1948, and Lupino found herself in the director’s chair with their very first production, Not Wanted, the story of a young woman who finds herself single and pregnant. During filming, director Elmer Clifton had a heart attack, so in order to save the production, Lupino finished directing duties.

Her other directing efforts included:

Never Fear (1949): Playing upon her own battle with polio, this film tells the story of the effects of polio during the 1949 epidemic. Much of the film was shot at a recovery center with recovering victims. Audiences stayed away in droves.

Outrage (1950): The Filmakers signed a three-picture deal with Howard Hughes’ brand-new RKO Studio. It tells the powerful story of a rape and its aftermath. “One topic which would better have been left unfilmed,” wrote Variety.

Hard, Fast and Beautiful (1951): Critics began noticing a surer style by this time, with a moving camera and a documentarian’s style of storytelling. The story questions how far one will go for glory and fame as it looks at the relationship between a young tennis star and her stagestruck mother.

On Dangerous Ground (1951): In addition to starring in this film noir with Robert Ryan, Lupino is also uncredited as director when she took over duties from Nicholas Ray when he suffered a nervous breakdown while filming.

The Hitch-Hiker (1953): Trim and mean, this is Lupino in top form as a director.

The Bigamist (1953): Parting ways with RKO, The Filmakers self-released this story of a man (Edmond O’Brien) with two wives. Lupino cast herself as one of the wives, which made her the first woman to direct herself in a film. The other wife was played by Joan Fontaine, the new wife of Lupino’s now ex-husband Collier Young. This would mark the end of The Filmakers projects.

The Trouble with Angels (1966): Her final director-for-hire film was the story of a young girl’s (Hayley Mills) adventures at a Catholic boarding school, with Rosalind Russell as Mother Superior.

Throughout the 1960s and 1970s, Lupino continued acting and directing in television. She directed episodes of Alfred Hitchcock Presents, Gilligan’s Island, The Untouchables, Bewitched and many more. She is the only woman to direct an episode of The Twilight Zone (“The Masks,” 1962, Season 5, Episode 25).