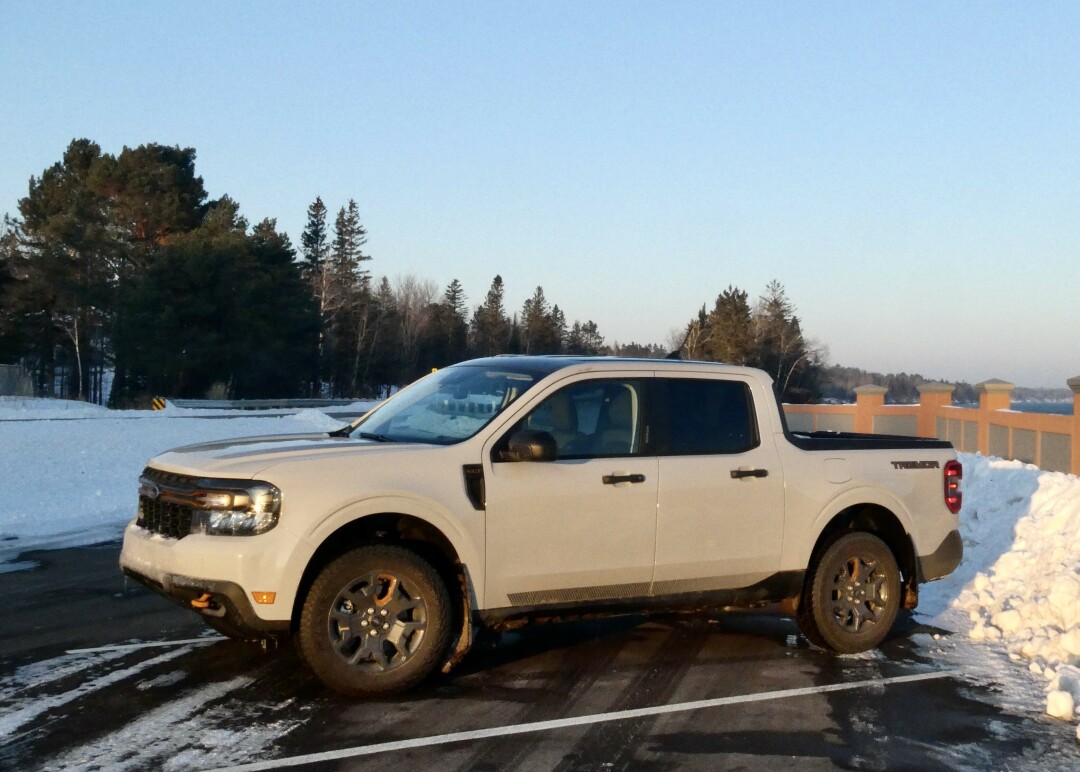 If you always wanted a pickup truck but you really don’t need the heavy-duty towing and hauling capability inherent in all the full-sized pickups, Ford has the perfect solution with its new Maverick.
After one year, the Maverick has established a whole new segment of its own, and the demand has been such a runaway success that buyers need to be very selective.
There is a good reason for the popularity. I like pickup trucks, and one of my sons owns one, but I am less enthralled with the exorbitant price stickers and the enormity of big pickups, where seeing over the hood, estimating how close you are in a parking slot, and just the maneuverability and agility are compromised.

The flurry of midsize pickups are very good alternatives, and for that, Ford has the rejuvenated Ranger that does a good job.
Then along comes the Maverick, and at a glance, you don’t realize that it isn’t big. You have to see it near a full-sized pickup to be amazed at the difference.
Perhaps the biggest attraction is price. The basic front-wheel-drive Maverick starts at $24,000 – an incredible bargain for such an impressive utility vehicle. The loaded test-Maverick I most recently tested had all sorts of features from the option bin, including all-wheel drive and the Tremor package, and for all it had, the price was still a bargain at $34,130.

I’ve written about the Maverick a couple of times, and I was most impressed with the hybrid model, because it was plenty powerful and got excellent fuel economy for a bargain price. My only criticism of that one was that it was front-wheel drive and not all-wheel drive, and up in the snowbelt, along the North Shore of Lake Superior where I live, it’s absurd to consider a 2-wheel-drive pickup, although some who tow heavy loads like the balance you get with rear-drive pickups.

The new 2023 Maverick XLT Tremor I spent a week with during this weekend of record snowfalls was, thankfully, an all-wheel-drive model, and it came in a unique new color called Avalanche. That means grey, because apparently the avalanches this color came from had picked up enough debris to be something other than white.

At any rate, the color fit well with the snow, and the Maverick was still easily visible under a blanket of white stuff.
But here is where Ford is playing a few games with consumers. If I’m buying a truck, the boxes I first check are for price, agility, performance, foul-weather traction – which means all-wheel-drive – comfort and convenience. The test truck checked all those boxes, but it also left some vital creature comforts unchecked.

The biggest curiosity is that you get such a great price for front-wheel-drive only, even for the hybrid version, but you cannot get all-wheel-drive on those models.
If you want AWD, you have to move up to the higher level, and when you get the AWD model, you learn you cannot get the hybrid drivetrain, but only the 2.0-liter EcoBoost turbocharged 4-cylinder, which has more power to push the AWD model, but fuel economy falls off to 20-25. That’s still not bad; I attained 24 miles per gallon as a high during city-highway driving on the hills of Duluth and the snowdrifts of the Gilbert Compound.

The hybrid model can get around 30 mpg – a big benefit.
So many of the new vehicles I test drive come loaded that I have gotten to enjoy and appreciate certain features, such as: push-button start, auto-start, satellite radio, seat heaters and steering-wheel heater, as well as power seat settings.
None of those boxes were checked, and when the temperature dipped below zero, those added features seemed more like necessities.
For example, in my rural setting, we have about a block-long driveway. I look out the kitchen window and see the Maverick parked out there with a new coat of snow on it while the temperature had then dropped into single digits.
I want to leave, so I grab the key fob for the auto-start switch – oops!
No auto-start, so I can’t remotely start the vehicle and get it warming up under the hood and in the interior, as well as the defroster.
I climb aboard using the quite handy running board, and then I realize I have to pull out the key from my jacket pocket and actually insert the key into the ignition and twist it to start, just like in the “old days.”
It was cold, and there was no button to push for a seat-heater, those wonderful devices that offer you warmth from the bottom-up – literally – which can make you even forget the normal heater. Same with the steering-wheel heater, which was nonexistent.
Personally, I don’t care about power seats so much, because in your own car, you probably never adjust the seat setting after the first time, unless you switch off with your wife or offspring as driver and there is a size discrepancy, but even then it’s only set and reset occasionally.
In the Maverick XLT there was no power seat switch either, so you used a manual lever for fore-and-aft sliding, and a side lever you could pump, spring-loaded, to raise or lower the driver seat.
OK, I’m spoiled. I missed even more not having satellite radio, because there were interesting and important football games in college and pro, and one of the best features of satellite radio is that you can find the broadcasts, both home and road, for every NFL game, just like all through the major league baseball season. Without satellite, we were stuck trying to find local entertainment of AM or FM radio.

Presumably you could add some or all of those features as options, although then the price would rise to nearer $40,000. But having driven several full-sized pickups and SUVs that cost more than $75,000, my old theory holds up – if you’re purchasing a new car, add a few of those options to the original price, because you will enjoy and appreciate them every time you climb in the vehicle, and it will add considerably to resale value when you decide to sell years later.

The Tremor package has better suspension and ground clearance, protection against off-road objects underneath, and it has various special trim items adorned in bright orange, as well as a large “Tremor” decal on either flank, and specially bolstered seats.
All the connectivity and safety alerts are built in, and the 8-speed automatic transmission is controlled by a rotating knob on the console. It worked well, but when you twist it all the way to the left, into park, the knob will keep turning, making you wonder in the dark if you indeed are in park, or maybe one notch short of that, which would be reverse!

Same to the right, where you’re in drive, but the knob keeps turning, as though maybe you’re in neutral. Again, at night, I found myself uncertain if I was at the notch I wanted, and if you stop short and want to pull out of a driveway, it’s absurd to think you’re in drive when you’re in neutral.
There will be a way to fix those things as model years pass, and I’m betting that Ford will find a way to provide broader use of AWD and hybrid technology on different levels of Mavericks.
But for now, Ford is overwhelmed trying to meet demand of eager buyers who see the Maverick, want a Maverick, but have ordered one and wait months for delivery.