A super Saturday of music 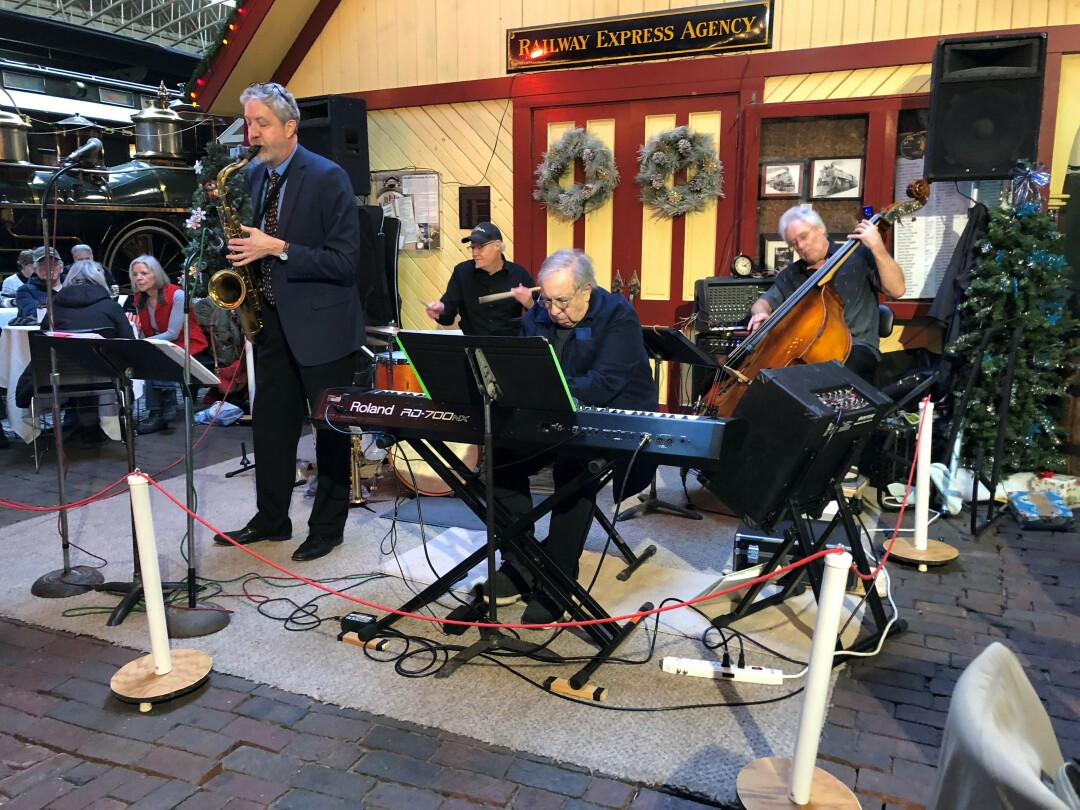 Saturday, Jan. 7, 2023: It all started at 10 am when I finally got down to Amazing Grace Café and Grocery to see what kind of music venue it has turned out to be after having read in the Reader that Chuck Haavik would be playing “Breakfast Music” there.

I was aware that the business changed hands a while back and the space rearranged from the coffee house it was when I lived here back in the 1990s. I had stopped by when I first returned to Duluth in 2020; at that point the place was set up as a convenience grocery with coffee shop. It was only during Homegrown 2022 that I gathered it had become a music venue once again but I didn’t manage to get over there.

Back in the day, the performance space was just a small area at the far west wall, next to the stairs up to the first floor of the DeWitt Seitz building where restrooms are located. This was not a conducive space for performers, with folks coming and going right next to them; nor was it great for the audience as the seating area was deep and narrow limiting views of the performers.

The outstanding memories I have of this place was seeing two touring musicians there – Chris Smither and Martin Sexton – in the late ‘90s. Smither has been a favorite of mine ever since and I had the opportunity to see him play a free concert in the park at Lake George, New York, several years back.

Amazing Grace’s present arrangement is quite nice, with a permanent stage that is low and wide, though pretty shallow, such that the musicians are pretty spread out. A piano is at the far left side of the stage; I hope it gets played occasionally.

Groceries are relegated to the rear, where the performance space used to be. The current arrangement of tables and chairs provide for decent viewing and hearing for the audience; the sound is good in this intimate space.

At any rate, I showed up at Amazing Grace at 10 and, not having ever seen Haavik previously, did not immediately realize it wasn’t him playing. Instead it was Ross Thorn, joined by others I did recognize – Owen Mahon on bass (not drums!) and Nate Hymun on mandolin. Near the end of the set Jacob Mahon joined the pickup trio, adding harmonies and guitar licks. 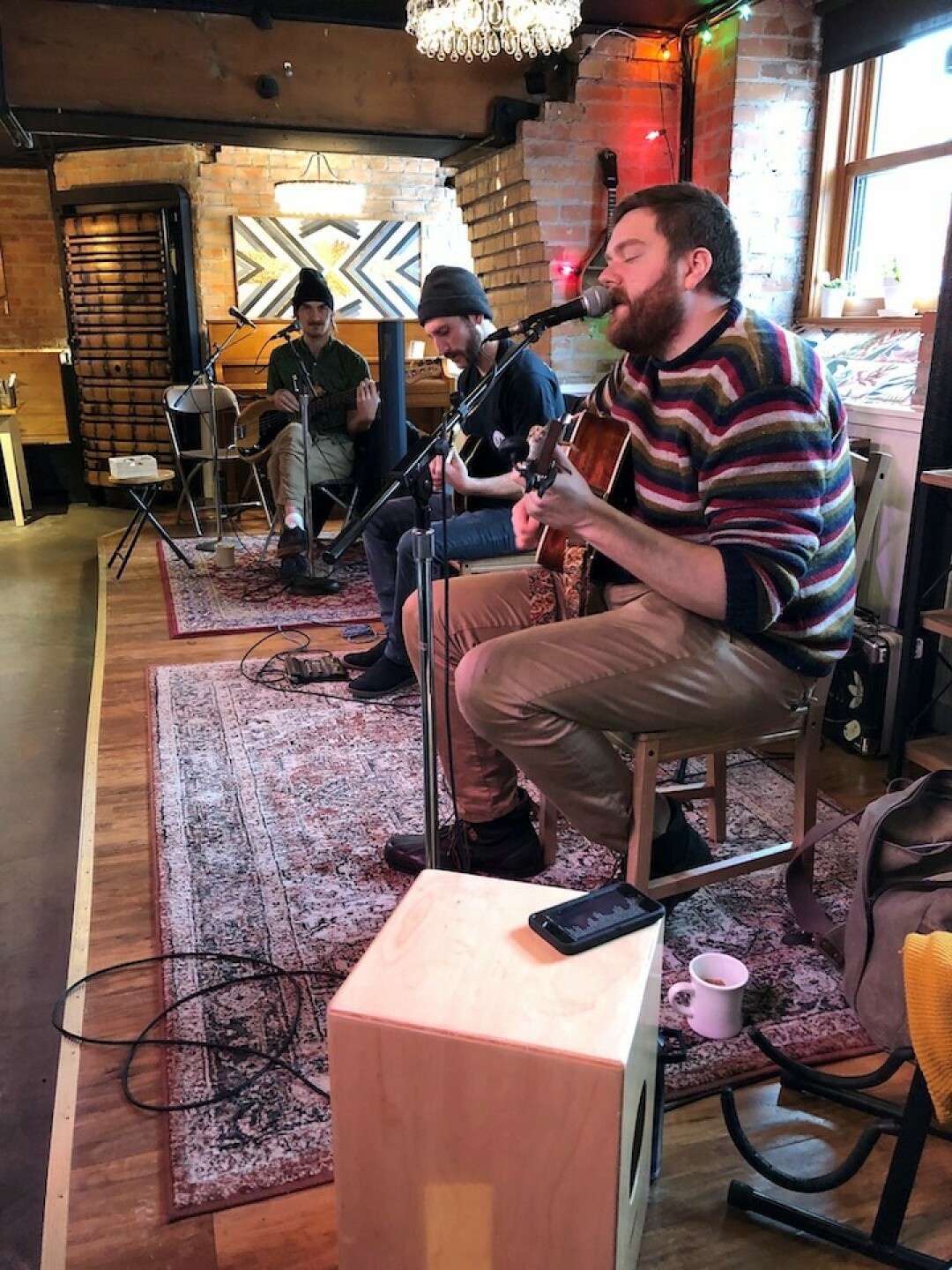 Ross Thorn is a big guy with a strong tenor voice and a decent falsetto who convincingly sang covers by a range of artists, among them Elton John (“Your Song” and “Bennie and the Jets”), Otis Redding (“Sittin’ on the Dock of the Bay”), John Prine (“Angel From Montgomery,” “Your Flag Decal Won’t Get You Into Heaven Anymore” and “Paradise”), Merle Haggard (“Mama Tried”) and Jason Isbell (“Cover Me Up”).

Some traditional songs were in his mix (a medley of “Will The Circle Be Unbroken” and “I’ll Fly Away”) and he sang a part of “Wagon Wheel,” which seems to have become a standard cover by many of our local musicians.

The Curmudgeon says Dylan ought to relinquish that composition of his to Old Crow Medicine Show and deny any part of it, despite its popularity.

Thorn is also a songwriter. He sang several catchy originals: “Gravedigger’s Son,” “South of Somewhere,” “Saturday Morning” and ”Gimme A Coin.” in which he turned the neat phrase, “crooked as a coast oak tree.”

It will be most interesting to hear the album he has coming out on Spotify in March and on vinyl in June.

Having made my first tentative forays into the regional jazz scene last summer with an experience at Oldenburg House in Carlton during the Honey Bee Festival and running into the Dan Nelson Quartet up in Grand Marais, I decided I had better take in the first of this year’s series of Jazz at the Depot.

Ken Buehler, Executive Director of the Lake Superior Railroad Museum, where the concerts are now held, welcomed a sizable crowd (154 folks) back and introduced the “great Depot Jazz Quartet.”
I recall these sessions were held for decades at Club Saratoga in Canal Park on Saturday afternoons but in November 2018 they were halted and the LSRM stepped into the breach to provide the quartet a home base.

The impressive musicians comprising the band are leader Randy Lee (tenor, alto and soprano saxophones, clarinet, flute and egg shakers), John Thorene (bass), Paul Ierino (keyboard), all of whom played at “the Toga,” plus the newest addition, Rick Bruner (drums). You may have read my review last week that featured Bruner, who was recently invited to join the band. It appears that he fits right in with the three stalwarts of the quartet.

To my surprise, there were several tunes familiar to me as the quartet covered legendary jazz numbers. One was the MASH theme, “Suicide Is Painless.” Likewise I knew of a number of the composers – Herbie Hancock, Duke Ellington, Sonny Rollins, Dave Brubeck and Charlie Parker.

Other composers were new to me and who I plan to learn more about. Lee provided an overview of jazz that helped me better understand the genre, saying that: “Jazz comes from blues, work songs, spirituals, and marches and has yielded many sub-genres: Ragtime, Dixieland, Swing, Latin American Jazz, Bebop, Cool School, Hard bop, Fusion and Funk!"

It was a fantastic three hours of some of the best music I have heard in a while. Lee’s clarinet playing on the Louie Armstrong hit, “Do You Know What It Means To Miss New Orleans,” brought back memories of my dad, who imbued me with a love of Dixieland Jazz.

One tune showcased Bruner’s jazz drumming chops – “Groovy Samba” by Cannonball Adderley – when he laid aside his drumsticks and brushes to beat out the Latin rhythm with his bare hands. Who needs congas?

And indeed, much of his playing brought to mind the iconic drummer Buddy Rich, whom I was familiar with only due to having watched the Tonight Show with Johnny Carson religiously throughout my junior and high school years and on which he appeared regularly.

How exciting to be exposed to a whole new world of music. I hope others will join me in attending these sessions that will be held weekly on Saturday afternoons through April.

So now that I’d become an actual fan of jazz, I headed straight from the Depot to Sir Benedict’s Tavern on the Lake to listen once again to the Dan Nelson Trio. I have written about them a couple of times now, so suffice it to say, they continue to entertain with their mix of instrumental numbers and old timey tunes, including one of my favorites, “Nobody Knows You When You’re Down And Out.”

So if all that wasn’t enough, I couldn’t resist heading out to the Powerhouse in Proctor for an evening of dancing to what I thought would be Hannah Rey and South of Superior. But instead, Indecent Proposal substituted.

I was not disappointed. At the beginning of their set, lead singer Josh Brown commented, in a somewhat sarcastic tone, that “we know you all like covers” and proceeded to launch into the song “Wagon Wheel!"

They really got rockin’ after that and included some of their own original tunes. Since it was a long day, I didn’t stay to the bitter end. However, I am determined to see them again soon when they play at Cedar Lounge in Superior this coming Saturday.

And what do you know? Homegrown’s Winter Fiasco with multiple bands and solo acts playing at various venues in Lincoln Park takes place this Friday, the 13th of January.

Another fun evening of music and dancing is anticipated. See you there!