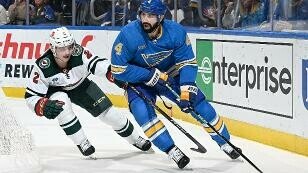 The WILD's Calen Addison goes against the Blues Nick Leddy in STL.

ST. LOUIS – The Minnesota Wild, fresh off of a solid 5-2 victory in the Gateway City against the Blues on New Year’s eve, is beginning to look a lot more like the team the fanbase was thinking they would see, and like one the team felt they had before the season commenced.
In several player interviews in the past two weeks, the phrase “we are playing more to our identity” has been used on a few occasions in media encounters.
And it is true, the club is 8-2 in their L10, and is playing some good fundamental hockey at this time. They ended the month of December with an 11-4 record.
The team played three divisional games this past week and went 2-1. They won at The Peg versus the injury-riddled Jets in a 4-1 final. They entertained DAL in St. Paul and put up a pretty absent effort in a 4-1 loss before winning last night in STL.
I’m not entirely certain that calling the team’s game an “absent effort” is totally accurate, but after trading goals in the first, with no one scoring in the second frame, the Stars tallied three times in the final period and took over the game.
The Wild game is coming together though. They are getting healthy and had the suspended Mason Shaw back last night. When scrappy physical forward Brandon Duhaime returns, the team will finally have the roster they expected to have for the season. And it only took 36 games to get close to it.
The Tale of the Tape after the Blues contest shows the WILD at 21st in GF with 113. They are coming together nicely on team defense, aided by netminder Filip Gustavsson’s recent streak, going 7-1 in his last eight starts.
Marc Andre’ Fleury, after having an uneven start to the year (along with the team), has gone 4-1 in his last five starts as well as having two 3-game win streaks and a four-gamer. Both tenders have been aided by an improved team defense that wasn’t too efficient earlier in the year.
The team is at 9th in GA with 101 against.
The team’s power play is 12th at 23.3% and the penalty kill is 14th with a 79.7% success rate. On the downside, this club still takes a lot of needless penalties and currently sits at second most with 473 PIMs.
I like being in the top 10 best for goals against, you must be able to defend if you want to perform in the playoffs. This team needs to elevate itself into the top 10 in goals for and has the talent to do that, and it wouldn’t hurt them if the PP were up around 25% and the PK was at 85% or better, and for crying out loud, this team takes way more penalties than it should.

Many of this team’s infractions are due to a lack of mental focus or selfish play. That phase of the game needs some immediate improvement.
This team is performing poorly in the faceoff circle. They had a 28% success rate on the dot versus DAL.
For the season they are at a paltry 26th in the league with a 47% win rate. Not good.
The club is at 25th in hits/team with 688 on the season. The leader, PHI has 1,024 by comparison.
The data is the data. It can’t be interpreted any other way than as you see it. So is this club a Cup contender or not? I can’t just automatically say that they are.
The January schedule shows 12 games, but there is one stretch that features four games in six nights. That will be a challenge, especially considering the geographics and opposition.
They play on Saturday night the 7th at BUF, returning to St. Paul for a back-to-back game versus STL. They go back to New York to face the Rangers and Isles to round out that stretch.
That is going to be a nail-biting six days for the team and the fanbase. The team will get its one-week “bye week” late in the month and during the first week of February.
The NHL All-Star Game will be Saturday, Feb. 4, at the FLA Panthers.
Can this club make a dent in the Cup tourney this year without shoring up some team weaknesses? Let’s say I have my concerns.
Will it take a trade to enhance the team’s playoff chances? It might. I hope GM Billy Guerin has his phone fully charged up and ready to go! The deadline is March 3.
THE MINNESOTA VIKINGS went to Lambeau Field today, they did not conquer, and they returned home with a 41-17 butt-whomping on their minds.
The final score is not indicative of the overall totality of the loss. A couple of late scores by the Purple made it look a bit better than it really was.
Make no mistake here though, the Green Bay Packers had their way with the Vikes. Folks, it was 41-3 with 9:30 left on the clock in the 4th quarter.
So, watch the tape, inventory the mistakes, review the fixes where available and move on. It is hard not to have some concerns about the club at this juncture of the season.
Having been a pretty biased observer of this team from its inception, as I got older I began to notice there would be weeks before certain games where I had no doubt the Vikings would win. I felt that for the season opener against the Pack. I felt it before the team played at Buffalo this year.
Then there are games when I have no “aura” about a particular outcome, and this past week leading up to the game, I wasn’t getting any signals at all, except that I didn’t have a positive feel for what might unfold.
Neither do I like teams going into playoff tournaments on long or extended win streaks. I actually prefer for a team to lose one late in the season if they have already secured a playoff berth.
Sounds goofy? Sure, but I’m a believer in the law of averages. Yup, you know, that sooner-or-later thing has a tendency to bite a few sports backsides here and there. I’ve seen it work both ways.
Today’s loss drops the Vikes to the third playoff seed. The Packer’s playoff hopes are still alive, but they have to complete the job by winning against a Detroit team that is still alive as well. That will be a game worth watching next weekend.
The Vikes will face the hapless Bears in Chicago. San Francisco moved into the 2nd seed spot with a win today. It would take a Vikes win, with San Fran and Dallas losses to get that seeding position back.
San Fran plays Arizona, and the Cowboys will face a scrappy Washington club that lost today and is eliminated from playoff contention.
Is it time for antacids yet? YES!
The Vikes aren’t healthy at the moment. The defense was exposed today in microscopic precision, and the offense got shut down too.
Somehow this team managed to win through every obstacle so far this season. But right now, in the words of Alfred E. Neuman – What, me worry? PEACE