Wings on the ground 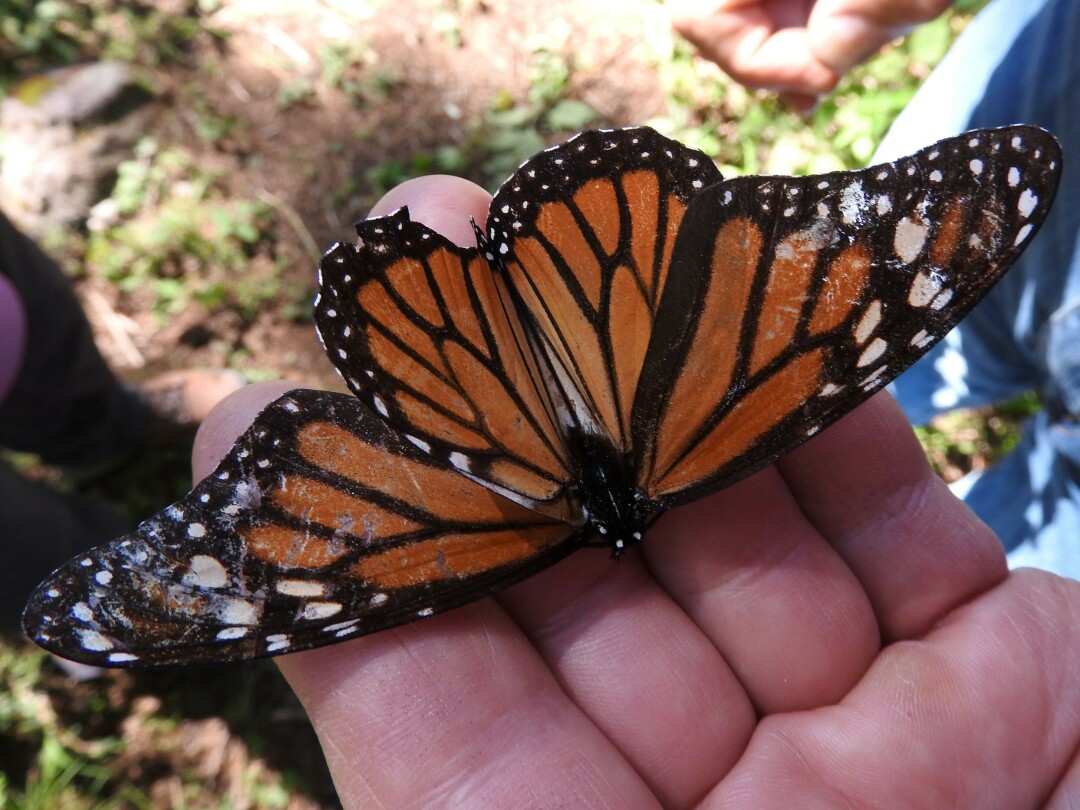 Bright orange wings lay like confetti among the dry brown fir needles and volcanic soil of the monarch butterfly sanctuaries we visited last month in Michoacán, Mexico.
I’d read that many of the millions of butterflies who overwinter in the high-altitude forests of the Trans-Mexican Volcanic Belt don’t survive, but the sight of the grounded wings really drove that home.
Winter storms are a well-publicized source of mortality for monarchs in the preserves. Rain or snow, wind and freezing temperatures combine to blow through the tenuous protections that oyamel fir forests provide.
One particularly terrible storm in 2002 killed an estimated 200-272 million butterflies – 75% of the population.
Paradoxically, the deaths allowed researchers to count butterflies thoroughly, and get a more accurate calculation of their numbers. While the previous best estimate was that butterflies congregate in a density of 10 million per hectare, scientists revised that upward to 50 million butterflies per hectare.

In comparison to those densities, and that death rate, the scattering of delicate wings we carefully stepped around or lifted gently for close examination, or held up to watch the sunlight play across their colors, was insignificant.
In fact, the condition of each fallen butterfly gave us a little window into the ecology of the forest. While butterflies find refuge from weather in these forests, not everyone here reveres them as a protected treasure.
Several other forest residents see them as a fatty feast that arrives on schedule every November.
During the museum group’s visit to El Rosario Monarch Butterfly Preserve, our guide Daniel called me over to an educational display he’d laid out on a stump. Each of the three butterflies had been eaten by a different predator, and their bodies bore tell-tale clues.
The male butterfly at the top of the display was mangled and chewed. This mess indicated a black-eared mouse as the murderer. Several types of mice will include monarchs in their diet in small numbers, but only Peromyscus melanotis migrates seasonally into the monarch preserves and may consume 40 butterflies in a single night.

Female mice seem especially voracious, and this may fuel their winter reproduction.
Butterflies who are too cold to crawl up vegetation to get off the ground are at highest risk of mouse predation. Over the course of the winter, mice consume an estimated 4-5.7% of the colony.
A female butterfly with her abdomen completely missing was the victim of a black-headed grosbeak, explained Daniel.
These birds seem to have a very high tolerance for cardiac glycosides. Those milkweed toxins are ingested by monarch caterpillars and conserved through metamorphosis into butterfly adulthood. The chemicals make most birds puke, but not grosbeaks!
In contrast to the neat bite of the grosbeak, the abdomen of the butterfly on the left had been sliced open to reveal pale goo.
Black-backed orioles, with their delicately pointed beaks, slit open the monarchs’ abdomens and eat only the most fat-rich innards while avoiding the toxin-filled husk. They feed more heavily on cold days when the butterflies are easier to catch.
Each of these predators – the mice, the grosbeaks and the orioles – have something in common with the monarchs themselves: they can ingest milkweed toxins and survive. In fact, various beetles, aphids and butterflies who eat milkweed, and the parasitoid wasps, nematodes, grosbeaks and mice who eat the herbivores, have all converged on parallel genetic changes to the sodium–potassium pump inside their cells. These adaptations make them insensitive to cardiac glycosides, and allow them to store the toxins to poison their predators.

Using these adaptations, black-headed grosbeaks and black-backed orioles kill somewhere between 4,550 to 34,300 overwintering butterflies per day, which adds up to two million butterflies per winter.
That’s about 9% of the monarchs in the Mexican preserves. Big, dense fir forests protect butterflies from this predation as well as from the weather.
In logged areas, where butterfly clusters on branches are more exposed, birds munch on up to 15% of the population.
While it’s tempting to mourn the butterflies and villainize the hungry birds, ecological thinking doesn’t really allow for picking sides in a food web.
Black and orange are the team colors all around, anyway.
What I do hope for is enough trees to shield the butterflies, enough butterflies to feed the birds and enough winged confetti still up in the sky to celebrate a healthy forest.
Emily Stone is Naturalist/Education Director at the Cable Natural History Museum. Her award-winning second book, Natural Connections: Dreaming of an Elfin Skimmer, is now available to purchase at cablemuseum.org/books and at your local independent bookstore, too. For more than 50 years, the Cable Natural History Museum has served to connect you to the Northwoods. The museum is open with our exciting Growing Up WILD exhibit. Follow us on Facebook, Instagram, YouTube, and cablemuseum.org to see what we are up to.