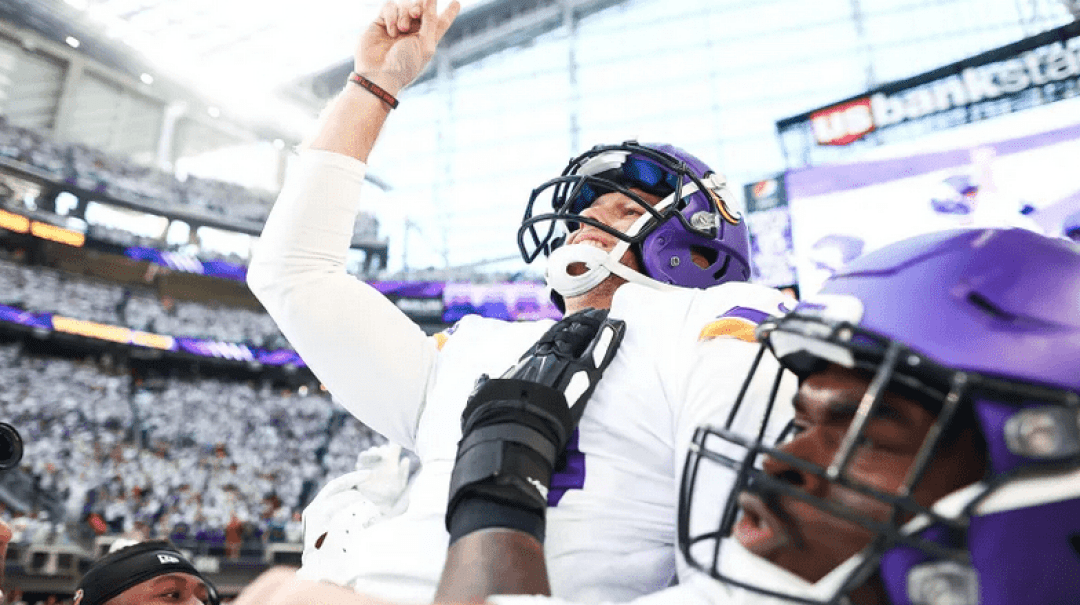 PALISADE HEAD – Like many fans, I keep waiting to be in the middle of watching another Minnesota Vikings football game and suddenly hear a huge crashing noise in some other part of the house.

You would presumably jump from your seat and try to find the location of the potential crash, only to find out that nothing has happened. It was a figment of your football imagination.

It’s like another figment of our collective imagination that this team now stands at 12-3 on the season after sending the NY Giants packing from a 27-24 defeat.

Once again, Greg Joseph kicked the winning field goal as time ran out in the 4th quarter. For Joseph, it was a career-long 61-yarder that clinched the game for the Vikes.

Going into this tilt, I felt the conditions were perfect for a “let-down” game. The team had expended a great deal of emotional energy on the Saturday before when they came back from 33 points down to beat the Indianapolis Colts in a 39-36 OT thriller for a new NFL record.

And with the Giants trending upward this season, this was anything but a surefire win for the Purple. The Giants came in at 8-5-1 and were still in the hunt for a playoff position.

Even considering the loss, they still are in a position to get into the Super Bowl tournament, and it would be their first appearance since 2016.

The Vikes got the ball, and drove down the field but could only advance to the Giants 43-yard line. With four seconds left on the game clock Head Coach Kevin O’Connell decided to try for the FG.

If the kick failed they were still headed to OT. But then, Joseph stepped up and calmly nailed the kick and the US Bank stadium exploded in holiday cheer.

At this point, all I can say is that this is kind of crazy. No one saw this season coming from this team. And truth be told, they still aren’t getting any love from most of the major football media.

In fact, after the great comeback game versus Indy, they dropped in the weekly Sagarin NFL ranking. The post-week-15 rank placed them at 13th based on an 11-3 record, going 2-2 versus the top 10 and 5-2 versus the top 16 with a 22nd ranked difficulty of schedule.

I understand part of the ranking – beating Indy doesn’t move your needle much in any rating. But the club still has one of the four best W-L records in the league, and even in the Sagarin, I see six teams ahead of the Vikes that I believe the Vikes are better than.

So, I am compelled to take the rankings with a grain of salt. They are meaningless at this time of the season and are mostly for fan entertainment.

Next weekend the team travels to Green Bay for a tilt with the Packers. They played a solid second half today in Miami to win 26-20.

The Pack stands at 7-8 for the season. Records-wise they are tied with SEA and DET for the 7th and last playoff spot, but when you add in the tiebreakers they are 10th.

They are on a three-game win streak and need to win out to have a chance, but still might not get in. The Vikes are still in the second spot in the NFC and will get at least one round of home-field advantage.

I’m not making any picks here, but when an “indoor” team goes outdoors, especially into potentially poor weather conditions, it usually doesn’t favor them.

They will play in the second tier of games on Sunday at 3:25 pm. The forecast is for a high of 37 F under overcast skies, with a 25% chance of precipitation.

Whoa here! Isn’t that “Viking weather”? Sure, about 40-some years ago it was.

All things considered, a Vikes-Pack game is never a dull affair, and I’m not expecting anything different from this game either! Happy New Year!

THE IIHF WORLD JUNIOR tournament commences just a few hours from now, and if you have access, you can view all Team USA and Team Canada games on the NHL Network. The games will take place in Halifax NS and Moncton, New Brunswick. If you are looking for an opportunity to see the NHL stars of tomorrow, tune this event in.

This tourney never disappoints. Since 2010 the USA and Canada have won Gold four times each.

How is the tourney shaping up for this edition?

With Team Russia still banned from the event, the IIHF power rank has the Canadians ranked in the top spot followed by the USA, FIN and SWE.

Well, you could probably throw the first three names into a cup, shake it up and draw names. Then again, there are the real serious people that study these matters and make their own lists.

A Vegas publication says the co-favorites are CAN and FIN but then ranks the USA second. OK, gotcha. Oddsshark has CAN at -110 odds, followed by the USA at +350, with FIN trailing at +400.

None of this matters to me because I’m not a bettor. Secondly, even if I was, I don’t think I’d wager any money on teams full of 17 to 20 year olds. It’s just too unpredictable from my perspective. But I do find the oddsmaker’s views to have some merit and that’s why I at least take a look at them.

As for the Finns, they are the steady eddies of this tourney. Take them lightly and you will pay. I am looking forward to this event!

RIGHT BEFORE the holiday break, the Minnesota WILD went on a quick two-game roadie out west. They put up a complete game in defeating the Anaheim Ducks in a 4-1 final.

However, the next night on the tail-end of a back-to-back they put up a stink bomb of a game in a 5-2 loss to the hapless SJ Sharks.

The Sharks were 2-8 in their L10 before this game. The WILD looked “off” from the start of the game, and never got much better. Throw in some officiating gaffes and some untimely penalties and the club put themselves behind the eight ball from the start.

They entered the holiday break at 19-12-2 for 40 points in 33 games. That places them in the top Wild Card spot ahead of CAL in the Western Conference with two games in hand.

How does the remainder of this season play out? The ATHLETIC projects the club to finish with a 98-point season and an 83% chance at the playoffs. They have a 44% chance of making it through the first round.

Does GM Bill Guerin have any deals in the works? Who does he view as “movable” and what could you get back for that player?

The deadline is March 3 this year. I think the team is in for a WILD ride! PEACE