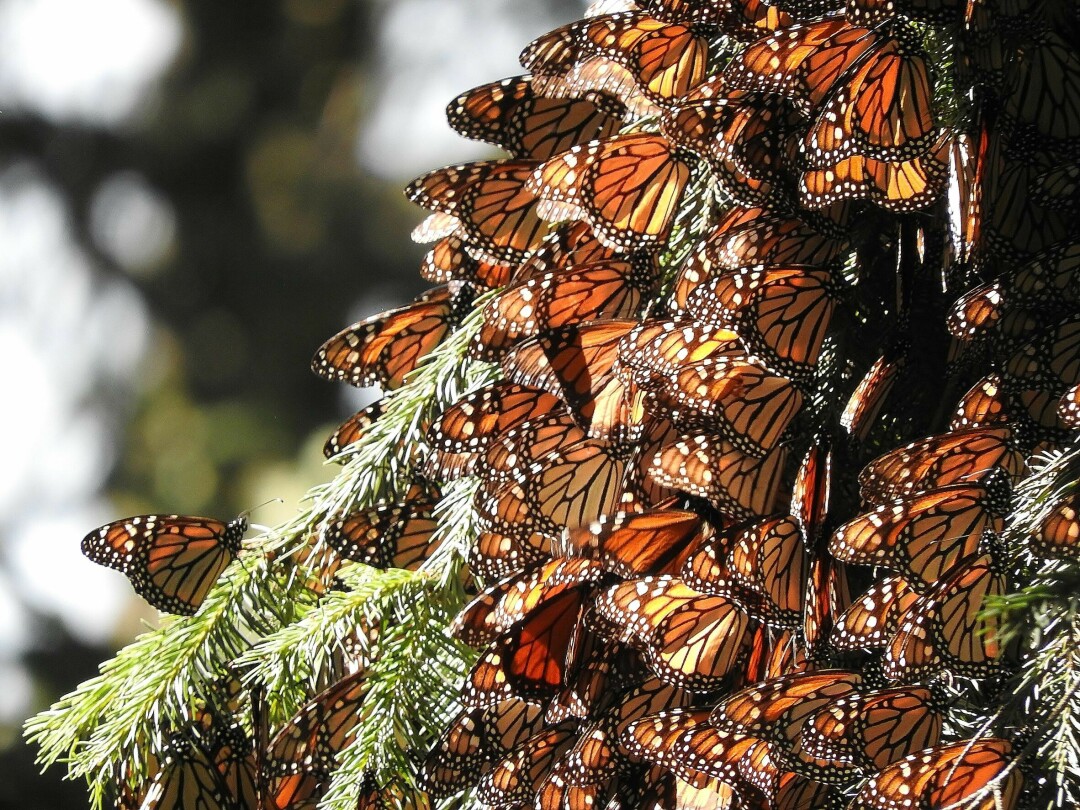 Monarch butterflies as we know them in the Northwoods – gliding gently on the humid swirl of summer – are intimately tied to milkweed plants.
It’s not easy for tiny monarch caterpillars to eat milkweed leaves, with their sticky, toxic sap, but the caterpillars who survive become little packets of bitter poison.
While the cardiac glycosides that monarch caterpillars glean from milkweed leaves do not make them completely immune to predation or parasitism, they are protected from all but the most well-adapted mouths.
But milkweeds aren’t the only plant that monarchs rely on.
Monarch butterflies as I recently experienced them in Mexico – gathering by the millions in their winter sanctuaries – are intimately tied to fir trees. Abies religiosa, the oyamel fir, also known as the sacred fir due to the way their oppositely arranged twigs make the shape of a cross, are essential to monarchs’ winter survival.

The fir forests began with volcanoes, as I wrote a few weeks ago. Rising from the surrounding deserts, the high peaks of the Trans-Mexican Volcanic Belt scrape moisture from the sky, creating relatively cool, humid summers, and moderate winters, between 8,000 and 12,000 feet above sea level.
Here, the firs, which blanketed most of Mexico during the last ice age, reside in a series of shrinking refuges, just 12 of which hold monarchs.
While it isn’t known when or how monarch butterflies first came to the oyamel fir forests to winter, or precisely how the individual butterflies find their way back, scientists have measured in detail what benefits the insects receive during their stay from November through March.
During the final stages of their southward migration, monarchs sip enough nectar to increase their bodyfat by 500%. That fat has to last them all the way through winter, spring mating, the northward migration and egg laying in Texas.
Being warm increases calorie use. Temperature moderation – effectively being refrigerated – is essential to butterfly survival. That’s where the firs come in.
Oyamel firs provide butterflies with buffers similar to white-tailed deer yarding up under conifers in the Northwoods. The boughs act as a blanket that prevents heat from escaping to the sky, and as an umbrella that reduces the amount of precipitation hitting the ground – or their bodies. By forming clusters at intermediate heights above the ground (something deer can’t do!) butterflies further avoid the sinking cold, the rain or the clear night sky.

Like flying squirrels huddling for warmth, the butterflies further increase their temperature moderation by forming thick clusters on the fir boughs. Monarchs at the center of the cluster stay warmer overnight, protected from freezing.
In contrast, daytime temperatures inside the clusters are cooler than on the surface, which results in a lower body temperature, and – like a hibernating bear – fewer calories burned.
Researchers have found that big diameter trees are better for temperature moderation than either bough clusters or small trees. Their trunks heat up and cool down slowly, resulting in temperatures that are 8 degress F warmer than ambient at night and 11 degrees F cooler during the day. They also have more surface area for butterflies to cling to.

Even though 90% of monarchs form clusters on the more-abundant fir boughs, butterflies who spend their time on the trunks of oyamels have substantially higher survival rates, especially after bad weather.
In the past, thick old growth forests with big trees likely provided much better protection for butterflies. While managing for big trees could help improve habitat in the butterfly reserves, there’s only so much foresters can do in the face of climate change.
The temperatures and moisture levels the trees need to survive will soon be found much higher up the mountains. A study done in partnership with the U.S. Forest Service projected that “by the end of the century, suitable habitat for the monarch butterfly may no longer occur inside the Biosphere Reserve.”

While the end of the century seems far off, Cuauhtémoc Sáenz-Romero, lead author of the U.S. Forest Service paper, has forecasted that “rising temperatures will shrink the habitat suited to oyamel fir trees in Mexico nearly 70% between 2025 and 2035.”
In response, local researchers, conservation groups and even school kids, are growing oyamel fir seedlings and planting them up to 1,300 feet higher on mountains in the existing sanctuaries, and also on Nevado de Toluca, a much higher peak in the Trans-Mexican Volcanic Belt that does not yet host butterflies.

At those elevations, the fragile seedlings need shelter of their own to get established. Bushes and shrubs can help, as well as planting Mexican pines at the same time. But monarchs need big trees, not baby ones.
Can the forests grow fast enough?
Visiting the monarch sanctuaries in Mexico and seeing uncountable numbers of these amazing insects all in one place was awe-inspiring. The tight relationship forged between the butterfly and the tree, and the volcanically created climate zone they share, represents everything I love learning about in nature.

Unfortunately, their plight is also a perfect example of the ways our too-rapid climate change is already leading to heart-wrenching loss.
My biggest buffer against despair in times like these is not so different than the butterflies’ – if you need me, I’ll be in the woods.

Emily Stone is Naturalist/Education Director at the Cable Natural History Museum. Emily’s award-winning second book, Natural Connections: Dreaming of an Elfin Skimmer, is now available to purchase at cablemuseum.org/books and at your local independent bookstore, too. For more than 50 years, the Cable Natural History Museum has served to connect you to the Northwoods. The Museum is now open with our exciting Growing Up WILD exhibit. Follow us on Facebook, Instagram, YouTube, and cablemuseum.org to see what we are up to.