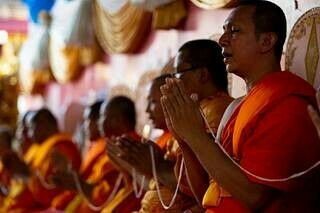 A century ago during another of the revolutions meant to save people from being people, one of them observed “the modern habit of identifying and labeling people into groups will be the curse of the age.”
Another observed “the one thing that stands unforgivable is denying forgiveness.”
This particular article gave a good birth struggle, causing me to twist the umbilical of thought and exit backward, Caesarian style as contemporary eccentricity and contrariness takes on the unlikely forms of convention and tradition.
When rainbow plume genders increasing at incredible pace an Egyptian-kilted, jackal-headed mother god who devours the children it fathered is less likely to draw attention than a shaved head, saffron-robed Buddhist monk with alms bowl or a Carmelite Nun.
It’s not, I opine, the existence of unusual or counter-ventional belief that tilts the sphere. Society has had those. This person’s divine law or god-given precepts are not the same as another’s.
It was common to recognize a form of sister or brotherhood based on other than direct biological linkage. Certain celibate males were routinely called father. Non-factual beliefs as those were viewed as symbolic or spiritual connections, making them solar systems away from asserting a person is actually a sister or father and requiring the assertion to stand solid as physical inheritance.

Is that the chasm? I ‘spect it’s some-thing of a big deal and whopping mental challenge to be told mystical metaphysical transformations have the weight of factual authority and you’ll run afoul of hate violations for going “Huh?”
The above paragraph was placed first after I went “Huh?” I felt overloaded and lost after a fairly OK start with the paragraph below, the original lead-in. Reading it see what you think and whether you can spot the place where I felt my mental wheels spin out of control.
As so often the case, it starts innocently.
You know when something clicks, when the bulb lights. An early “yes” for me hit in the Mark Twain quip, “It’s not easy to be eccentric.”
I understood that before enough water passed under my keel to know about humor. For me it wasn’t funny, it was reality?
Consider this, maybe people like me are a form of coal mine canary. A hardwired unconventional thinking something “strange” stands a good chance being onto something.
Don’t discount the unexpected. If someone says they’re having a friend for dinner they might very well mean it.
Eccentricity is more than oddity. It means operating outside the normal driving lanes. Eccentricity isn’t for the timid or those unwilling to be laughed at.
In a meeting ask “Why are we doing this?” If the response is scorn for the question, you then know those you asked have no immediate answer and blame you for that failing.
See, not easy. But, for democracy and functional (as opposed to decorative) diversity is to work well there have to be some voices from the outer lanes.
The majority might benefit from a moment’s pause, “Is this worth doing?”
Proposals to put more effort and energy and resource into a project may be a sign it’s failed or outdated. Or at least look at alternatives even if this means alienating the boosters or other beneficiaries.
Eccentricity is not the easy path for building friendship or gaining applause.
Are we OK so far? Nothing was written there that seemed too off-rails, unconventional or provocative. But, I’d lost the thread and was sliding out of control because I suddenly crashed into the next two barriers.
Here they are: “Regular pleas for unity make me wonder if the need wasn’t caused by an excess of diversity.”
“Cracked (a somewhat antiquated term) as my ideas and visions may be, I’ll bet cash money that persons hewing the cry against ableism are totally silent on that topic when picking a dentist, a surgeon or their mechanic for a brake repair. Weak eyesight and poor driving record isn’t what they seek facing a colonoscopy, either.”

OK, maybe only examples of erratic thinking to bounce like that, but I felt I’d lost direction and didn’t know which way to turn. As evidence the following five.
“The other night shortly before midnight the temperature was in the 60s with heavy rain my computer said it was 34 degrees and sunny. It did not indicate where.”
“I scratch my head. Isn’t a month of voting with multiple ways to directly and indirectly place a ballot more difficult to navigate and more prone to flaws than limiting the process to 24 hours? In some cases when more is advocated it makes sense to ask ‘more of what?’”
“An elderly physician introduced me to the concept of not spending $25 on a two-bit complaint. Wanting the result of feeling better, I resisted but have since gone on to see how time and again investing in cures and fixes results in costlier problems; not solved, just more expensive. A 25 cent illness won’t kill you the way a million dollar cure can.”

“When I was in grade (at the time called grammar) school every teacher I had made a strict point of making their position in sex absolutely and abundantly clear to everyone at all times in exactly the same way. They were Nuns, easily and often confused with Nones. Far as they and we third graders saw things, genitals didn’t have a role in geography or math. Fact was, for a fingers and toes mathematician addition of an added digit was a place where a boy could get stuck.”

“In sawing wood being best at chess doesn’t matter.”
You can see it, jumping thing to place, I was lost.
But I can suggest a possible explanation for my confusion. Removed from the immediate, I catch a glimmer in a time-place where most of us don’t already have a strong background or set position.
Less than 100 years ago, the Spanish Civil War can be seen as rehearsal for WWII but for tumult to follow.
In rough outline the opposing forces were Republican and Nationalist. Simple, the Republicans were reformers comprising all sorts; democrats, socialists, anarchists, communists, idealists and visionaries.
The Nationalist side was decidedly traditional in terms of business, military, church and etc. interests.
How Spain, a former world power colonial empire, would go had global importance.
Interestingly enough, the National Socialists (NAZI) in Germany got involved. Which side? The Nationalist.
Despite Herr Goebbels’ frequent reminder that NAZIS were socialists first and nationalist second, the party supported the Nationalist cause, after which Spain stayed relatively neutral during WWII.
So, the German socialists decided not to support those in Spain and instead aligned with the nationalists while also making a pact with Soviet communists to divide Poland.
Perfectly clear? Of course not. How could it be?
Times of confusion are confusing, making it not easy to be human, not easy even to be eccentric.
Apparently what’s easiest achieved is commonest cruelty.