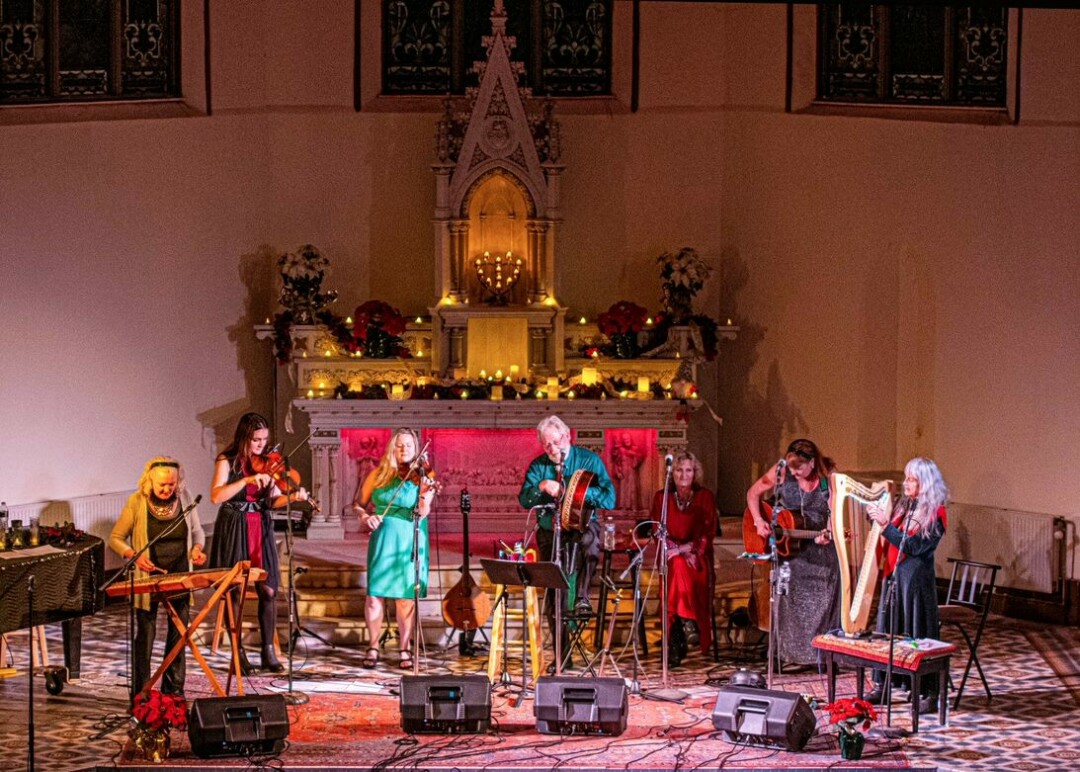 It ‘tis the season to hear all sorts of Christmas music, whether you want to or not!

Stores have been assaulting us with it since before Thanksgiving. It can all get to be a bit much, save for some timely and more nuanced live performances that put one in the mood for the holidays.

I had hoped to hear George Winston at the DECC this past week but another sign of the season was the snowstorm on Wednesday, Dec. 15, that caused the concert to be canceled, along with other gigs I would have been interested in. I was particularly keen to hear Winston since I saw him in concert back in the early 1980s and listen to his 1994 Forest album on cassette every year about this time. That album has a couple tracks from the film, The Snowman, which I have on VHS and watch each year at Christmastime, my favorite being “Walking In the Air.” (Yes, I still listen to my old cassettes and watch VHS tapes, as anachronistic as that may sound.)

As a fun evening out, Saturday, Dec. 17, my partner and I traveled over the High Bridge to hear Ten Crow Moon at Thirsty Pagan in Superior and grab a bite to eat. Turns out it was “Ten Crow Mike” performing (as someone else put it) with Misisipi Mike sitting in for the absent Doug Olson. Rick Bruner and Daryl Yankee carried on without Olson.

With seasonal attire and blinking Christmas lights MM added to the merriment of the evening. Along with a number of their original songs, TCM played “Blue Christmas,” “Please Come Home For Christmas” and featured Daryl Yankee’s excellent solo of “Have Yourself A Merry Little Christmas.”

Fortunately, my plan to hear Willowgreen in concert at Sacred Heart Music Center later that same evening panned out. Titled, “A Willowgreen Winter – Celtic Music for the Season,” the seven-member group’s selections provided a thankful respite from the ubiquitous and incessant background muzak of pop Christmas tunes.

Willowgreen was active and recording between 1984 and 2006 but, after a 15-year break, was back performing in 2021. Evidently it has a faithful following, since SHMC was pretty much at capacity in spite of parking and walking challenges due to the recent accumulation of snow.

This was my first hearing of the group, though I do have an old CD of member Georganne Hunter’s harp music. How often do we get to hear harp music these days? Usually only at this time of year, so I savored her “Falling Snow” number in the second set.

Jim Ofsthun, the sole male in the group, sang a traditional Norwegian carol based on an old Danish poem. Sue Spencer, Wendy Nelson, Mary Lou Williams, Liesel Wilson and Bridget Spencer comprise the rest of Willowgreen. Their vocal harmonies on these songs created an authentic Celtic sound. They certainly did justice to one of my very favorite carols, “The Holly and the Ivy.”

Several of the traditional tunes in minor keys were meditative, while others were sillier, such as “Mrs. Fogarty’s Christmas Cake” with jokes about holiday fruit cakes abounding. Mary Lou Williams performed a beautiful rendition of Joni Mitchell’s “River,” with its more melancholy melody.

One secular song which somehow has come to be played regularly during the holiday season, “Waltzing with Bears,” received a holiday update with Santa rather than Uncle Walter doing the dancing. The program ended with the group filing out the center aisle to “Silent Night” with the audience joining in.

Willowgreen’s printed program included this thought, apropos all seasons: “Our heartfelt thanks to all of you for your support of live music.”

A more traditional holiday concert with Bill Bastian and the Highland Quartet was presented by the United Protestant Church in Morgan Park on Sunday afternoon, Dec. 18.

An annual event that dates back 30 years, it had been on hiatus the past couple years due to COVID. The church was beautifully decorated and filled to capacity, with many of these folks seeking a more religious expression of Christmas.

The song selection did not disappoint, with Bastian’s tenor voice filling the sanctuary with favorite Christmas hymns, beginning with “Come All Ye Faithful.”

Several sing-alongs were included in the program, which had me hearkening back to my days in the church choir of my youth.

And speaking of “Youth,” it is one of those words that rhyme with Duluth and is included in a song I was unaware of until now – Merv Griffin’s composition, “Christmas City.”

Beyond the quality of the musicians, the acoustics of church were perfect for the unamplified strings and Bastian’s vocals.

These two concerts were the musical equivalent to comfort food, done just how you like it.