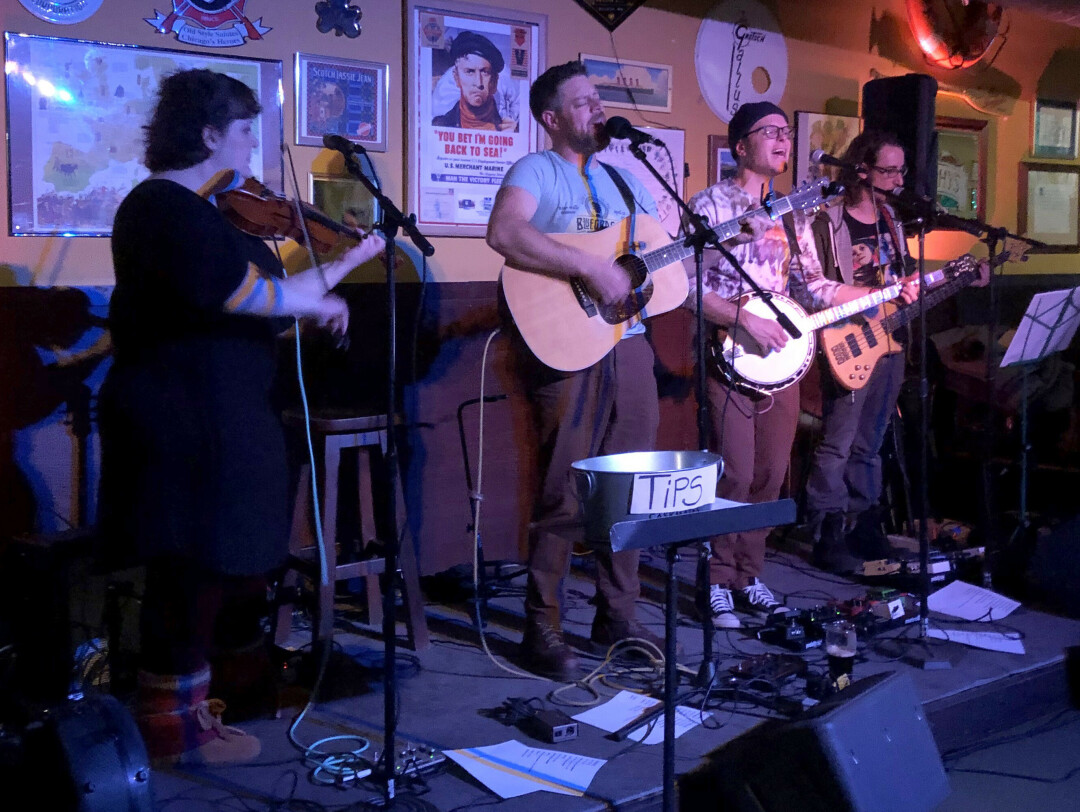 It was another exciting week for local live music with the debut of a new band, an outstanding performance by a local favorite, and a return appearance of a notable out-of-town blues band, plus my own discovery of an established duo.
I got a teaser on Monday, Dec. 5, when I popped into Bent Paddle Brewing Co. to hear what was playing. It was the newly formed Side String Band, which is an amalgamation of some of our local talents: Adam Staupe (standup bass), Harrison Olk (banjo), Clancy Ward (fiddle) and Nate Hymun (mandolin). The band’s name derives from all of the members being sidemen in other string bands. I’m not sure that is actual fact, but I’ll go along with it. On this occasion, Jacob Mahon (guitar) joined the group for several numbers. I only got to hear a few songs; their cover of the Johnny Cash tune, “Big River” was excellent and cemented my desire to hear this group again as soon as possible (probably on Monday, Dec. 12 when they are again at Bent Paddle).

And speaking of Bent Paddle, I am very positively impressed with the new arrangement that accommodates bands in the area formerly devoted to “merch.” It effectively separates the drinking and eating sections from the performing, listening, dancing and drinking area. There is a small but adequate dance floor in front of a low stage capable of containing a fairly large band. (Not sure it could contain Big Wave Dave and the Ripples, but then they squeezed into Kom-On-In last Homegrown!)

The sound was good throughout this section, with massive wood beams helping mitigate the effects of the high ceiling. The sound filtered through as background music to the outer nooks and crannies of this large converted warehouse.
On Wednesday, Dec. 7, I was in for a treat: Danny Frank & the Smoky Gold played at Carmody Irish Pub from 6-9 pm. The place was packed for a change, reason being it was a fund-raiser for the Duluth Branch of the NAACP and some folks were there for the very first time.
Danny Frank & the Smoky Gold includes Harrison Olk, the incredible Dr. Erin Aldridge (concertmaster of the DSSO) and now, the latest addition, Joe “Smokin’ Joe” Scarpelleino, besides its leader, Danny Frank. This is an accomplished band; the sound it produces doesn’t get much better than this.
Danny, on acoustic guitar, has a good strong voice with great nuance that comes through loud and clear on his original songs. The interplay between Erin’s virtuoso fiddle and Harrison’s lightning banjo creates an infectious energy.
The addition of Smokin’ Joe on electric bass gave a hard-to-beat depth and funky rhythm to the performance.
Misisipi Mike Wolf joined the foursome on several numbers, including “Smoky Gold.” His guitar licks were icing on the cake.
And then there were the wonderfully harmonizing vocals, demonstrated by the final number, “Savannah,” another original composition sung a cappella.
Between sets, the president of the Duluth NAACP, Classie Dudley, spoke briefly to the crowd, praising it for coming out that evening and also exhorting us to join the branch and to participate in their actions and demonstrations.
Eleven out of the 23 tunes the band performed were originals by Danny Frank, the most compelling and apt for this benefit concert was “Clayton Jackson McGhie,” a song about the horrific lynching of three Black men in Duluth in June 1920. It was one of several from the 2021 Smoky Gold album. The remarkable range of covers played included Dylan’s “One More Cup of Coffee,” Dolly Parton’s “Jolene,” the Grateful Dead’s “Fire On the Mountain,” and Ralph Stanley’s “Little Maggie.”

This was just an outstanding performance and attendees showed their appreciation by insisting on an encore, which was a pleasing rendition of John Prine’s “Angel From Montgomery.”
The next evening, Thursday, Dec. 8, The Jimmys, a seven-member blues band based in Madison, Wis., were in concert at the West Theater. I had seen them last year at the West, before I started writing for the Reader, and was pretty pumped to hear them again. The place was nearly at capacity, so they have quite a following. The band tours regularly throughout Wisconsin, when it isn’t playing in Duluth, Romania or even Cancun, Mexico (!), as it will for a week in February 2023.

Jimmy Voegeli is the nominal leader of the eponymously named band, who wails on the organ and keyboards and leads some vocals.
The band touts a tight brass section with Mike Boman on trumpet, Joe Goltz on trombone and Peterson Ross III on saxophone. Chris Sandoval keeps the backbeat going on drums, together with Johnny Wartenweiler on bass guitar.
But the main showman is Perry Weber on electric guitar, most lead vocals and humorous commentary. His delivery is reminiscent of David Bromberg, with lots of references to trouble with women (“You Only Give Me The Blues”).
When he sang the classic “I’m A Man” by the Spencer Davis Group, he let the horns complete the lyric lines. The audience ate it up.
Like Danny Frank & the Smoky Gold, The Jimmys played a mix of covers and original tunes, with several from a soon-to-be released album. Originals included “Give My Regards To The Groom” and “Room 11 On A Saturday Night,” both inspired by real-life experiences. It was a rockin’ show for sure, lots of folks were out of their seats and dancing.

My overall impression was that it was a fairly short concert – I noted only 15 songs before the obligatory encore. I bought a Jimmys CD last year, so I passed on more merchandise despite Jimmy’s repeated hawking during the show of what was brought along for sale. And I found it more than interesting that a tip jar was on stage (several people contributed) to help the band pay for the $600 of fuel needed to bus the band to the Twin Ports. That was a first in my experience at a paid concert.

Of course all of us who love live music understand that musicians need economic support, but I’m not sure that shouldn’t have been taken care of in the contract with the West.
On Friday, Dec. 9, I decided to get out again to see the duo Similar Dogs – Sarah Jane Hale and Joe Lindzius – at Sir Ben’s. The two play regularly around here (most frequently at Thirsty Pagan), but this was the first time I heard them. Joe played acoustic guitar while Sarah sang.
Their repertoire was all covers and the range of tunes was rather extraordinary. Beginning with the seasonal hymn “Mary Did You Know?” they had fun singing “You Are My Sunshine” (with lots of folks singing along), Roger Miller’s “King of the Road,” Cyndi Lauper’s “True Colors” (another sing-along), “Smooth Operator” by Sade and a medley of Prince tunes including “Kiss” and “Purple Rain.” Toward the end of their three-hour set, they performed “Felice Navidad” to get us all in the mood for Christmas.

What I found most intriguing about them was how Sarah’s low vocal range paired with Joe’s perfectly pitched falsetto. Their sound was very enjoyable. I look forward to hearing them play again.