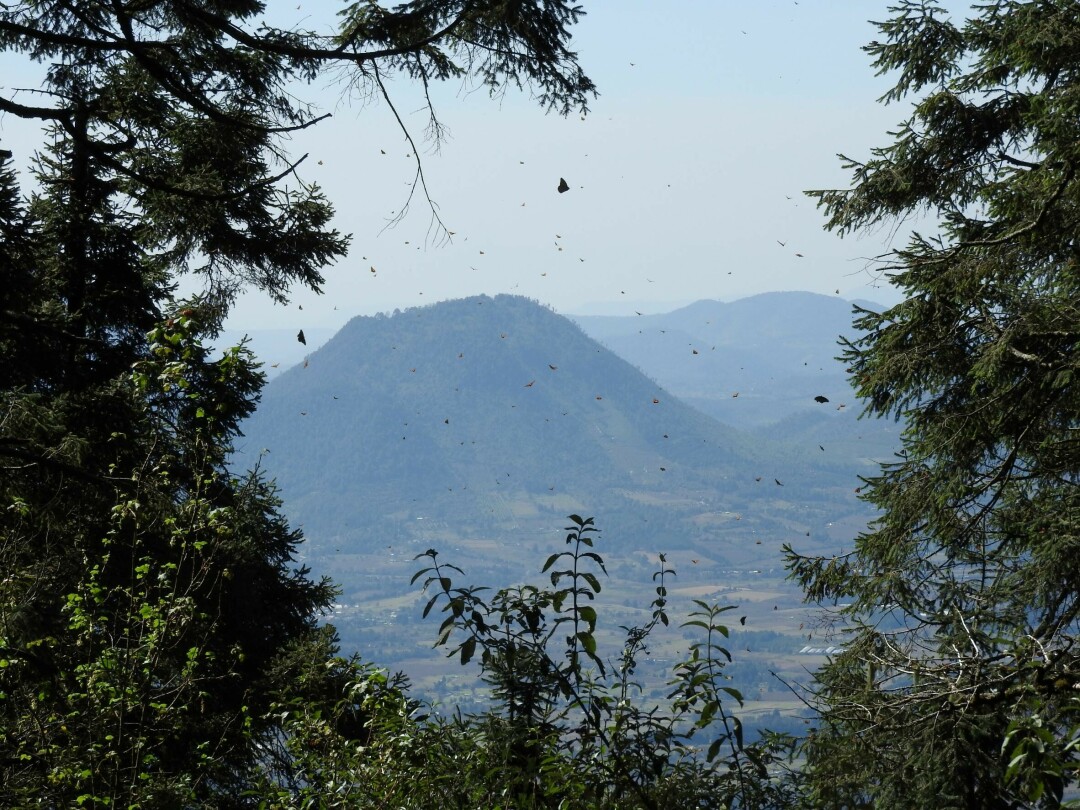 Lava-colored monarch butterflies float through a sunlit gap in Sierra Chincua Monarch Butterfly Sanctuary, while across the valley another volcanic peak rises to hold more of these overwintering pilgrims in a favorable microclimate. Photo by Emily Stone.

Volcanoes welcomed us as we descended into Mexico City. Their mountainous, erosion-wrinkled forms were dark with trees.
They rose like islands above the tangled web of roads, the fields of dry-season beige, and the rainbow rectangles of homes glinting in the arid sun. The haze of smog turned the distant ones to shades of gray.
Dominating the skyline, these peaks are part of the Trans-Mexican Volcanic Belt that spans across Central-Southern Mexico from the Pacific Ocean to the Gulf of Mexico. They divide the country, and the continent, too. North of this belt you find black bears. South of it you find monkeys. And clinging to the peaks we find magic.

Geology has been on my brain lately, as the museum’s Exhibit Committee develops a plan to teach the geologic history of Northern Wisconsin, but volcanoes weren’t the reason we traveled to Mexico.
Instead, this group of 13 Midwesterners had followed some old friends south – we came on a museum-organized trip to visit our monarch butterflies in their winter retreat.
Each fall, one generation of monarchs emerges from their shimmering green chrysalids, senses the shortening days, cooling temperatures and dying milkweed, and pauses their development.
Instead of maturing, mating, laying eggs and dying within weeks, they set off on a grand adventure. From all over eastern North America, a billion butterflies funnel down, feeding hungrily on flowers all through Texas, turning nectar into fat reserves.
Orange-and-black wings carry these tiny creatures south until they converge on a dozen mountains west of Mexico City in the Trans-Mexican Volcanic Belt.
Since the butterflies who migrate south are 3-4 generations removed from the ones who last overwintered in Mexico, scientists have long pondered their navigational skill. In the absence of thick clouds, the butterflies find their way using the Sun. New research shows that concentrations of the mineral magnetite in a monarch’s thorax may also help them sense the Earth’s magnetic field.

When our group arrived in the old mining town of Angangueo – which now bases its economy around butterfly tourism – we learned that the density of the silver, zinc, lead and copper concentrated by volcanoes, and sought in the mines, is probably “visible” in the local magnetic field. It’s no accident that las mariposas monarca and miners both congregate here.

And once here, monarchs may have multiplied the effect. Most male butterflies die on the mountain tops after they mate, while the females carry the future north. Thirty-thousand years’ worth of composted monarchs have increased the concentration of magnetite in the soil, leaving signs for their descendants to follow.

But while magnetism might be the “how,” it’s not the “why.” The cool, wet microclimate on the tops of these volcanic peaks, rising to 10,000 feet above the arid lowlands, is essential to butterfly survival. Cool temperatures, which rarely drop much below freezing, help the butterflies conserve their fat reserves. Clear springs and fog provide water to drink.

Oyamel fir trees, which blanketed most of Mexico during the last ice age, find refuge there, too. Now their thick boughs protect monarchs from storms.
“This is a sacred site,” our guide Daniel reminded us, as we approached the groves so thick with butterflies that the branches drooped. Monarch wings caught the sunlight and for a second my mind flashed to images in the news of glowing orange lava erupting from Mauna Loa. These butterflies even mimic the colors of volcanoes.

On our way back down the trail, an opening in the trees offered a view across the valley. The flat-topped triangles of nearby volcanoes, hosting other winter monarch colonies, printed their distinctive shapes on the sky.
That shape appeared again when we visited the pyramids of Teotihuacan.
“This is a sacred site,” Daniel admonished once more, and our local guide pointed out that the pyramids seemed to echo the form of the nearest volcano. The building stones, too, were volcanic pumice filled with hardened air bubbles that make it lighter weight – a desirable characteristic when building giant structures by hand.

The last leg of my trip found me gazing out on a frozen Lake Superior after I shuttled a participant home. I shook my head in wonder, realizing that this sacred place, too, was formed by ancient volcanoes.
Volcanoes are essential to our living Earth. Volcanic activity keeps our planet young and fresh by renewing the Earth’s crust and helping create our life-giving atmosphere. It’s no surprise, then, that at many a volcano someone will whisper, “this is a sacred site.”
So, although we didn’t set out on our trip to Mexico with the intention of visiting volcanoes, that seems to have been the result. Volcanoes provide shelter to butterflies, a model for pyramids, and inspiration to many cultures. And finally, their pull in the Lake Superior basin draws me home.

Emily Stone is Naturalist/Education Director at the Cable Natural History Museum. Her award-winning second book, Natural Connections: Dreaming of an Elfin Skimmer, is available at cablemuseum.org/books and at your independent bookstore, too.