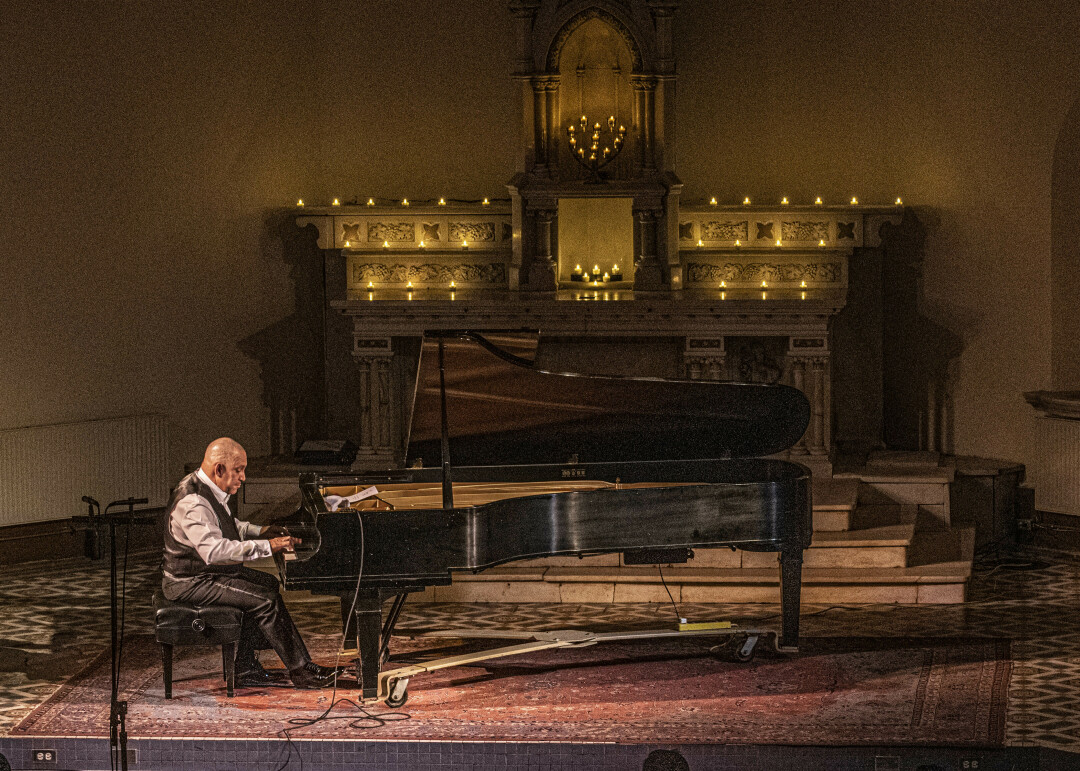 The much-anticipated concert by Cuban native Nachito Herrera took place on Saturday, Nov. 19, at Sacred Heart Music Center. It was everything and more of what was promised by this incredible pianist, music director, composer, arranger, producer and recording artist who now calls Minnesota his home.

The program title was “Nachito Herrera Presents: Gershwin Meets Lecuona” with a set list that alternated pieces by each composer. Herrera provided background (also printed on the back of the concert program) on the illustrious Ernesto Lecuona, who shared Herrera’s Cuban birthplace, noting that he was a contemporary of George Gershwin.

He went on to say that the Steinway he would be playing was a magnificent instrument and, waving his hand around at the arched and groined ceiling, that “the acoustic here is perfect.”

With that, Herrera launched into his first number, “Embraceable You” by Gershwin, with his own jazzy arrangement which sent more than just my heart soaring. The sound of the Steinway completely filled the space and could be felt in one’s bones.

He followed up with “Tres Pasos” (Three Steps) which did indeed sound much like a Gershwin composition. This was brought home even more as Herrera performed the alternating works.

Midway through the concert Herrera explained to the audience the particular similarities between the music of the two composers, reporting that Lecuona himself said he had been influenced by Gershwin’s work. He demonstrated some of the typical Cuban rhythms, which reveal the influence of African music in Lecuona’s work, comparing them to the swing beats of Gershwin.

Although he had yet to unequivocally document it, Herrera felt certain the two composers must have met when both were performing in New York City in the early 20th century.

One of the most dramatic and technically difficult pieces was “Gitanerìas,” wherein Herrera’s left hand maintained a non-stop rhythm throughout most of the piece on the lowest notes of the piano.

After the concert Herrera explained to me the intense focus such compositions require in order that the muscles on the hand and arm do not to cramp and ruin a performance.

I am by no means an expert or aficionado of piano works, so my assessment that this performance was extraordinary doesn’t carry much weight, but others in the audience were also enthralled, using superlatives to try to capture how the music spoke to them.

One curmudgeon attending criticized the performance as being over-the-top with a flamboyance more akin to Liberace than a nuanced interpretation of the classic works. Whatever.

Herrera freely admitted his kinship with Liberace, remarking how difficult it can be to play with rings on one’s fingers. He told how he explained to his wife, Aurora, why he needed to remove his wedding ring during performances. He found it amazing that Liberace could play so well wearing numerous rings on both hands.

When asked if he would mind being dubbed the “Latin Liberace,” the response was from Aurora and Herrera: “We really like it. Sound is great.”

Despite no glitz, technique plus showmanship says it all.

Near the end of the concert, Herrera again commented on the “perfect acoustic” of SHMC and reiterated that he would return to play this venue anytime.

He completed his performance with individual tributes to Lecuona and Gershwin; the latter being his own arrangement of “An American in Paris” and “Rhapsody in Blue.” The unending applause at the conclusion of the hour-and-a half concert was rewarded with Herrera’s heartfelt homage to the United States in the form of his interpretation of “America the Beautiful.” As an immigrant to our country, who became a citizen 12 years ago, it revealed his appreciation for our freedoms that many of our fellow citizens lack.

The Sacred Heart Music Center Board is to be commended for bringing Herrera to this venue. While many of the concerts presented at SHMC are great, this one was the best one I have heard here thus far, given the combination of talent, instrument, music selections and acoustic.

With this concert over by 9 p.m., I decided to pop into Carmody Irish Pub to hear an international duo by the name of Water Cat, made up of Henry Turnquist and Emma Musto.

Turnquist lived in Duluth seven years ago. While traveling overseas he crossed paths with Musto, a French native, and formally met her at a hostel in Jaipur, India. Eventually this meeting led to him living in France for more than two years. The couple relocated here only a short time ago.

Turnquist plays a steel tri-cone resonator guitar, an electric banjo, acoustic guitar, electric guitar, harmonica and stomp box and foot tambourine. Most were used in this gig. He sang in unison with Musto, who has a gorgeous voice and performed several songs in French.

She was charming, reminiscent of a performer I recall from long ago, from the Andy Williams Show – Claudine Longet. Songs sung in French always sound so romantic, no matter what the lyrics. The duo performed a couple of original tunes (“SAD” and “Burning in the Sun”) as well as some covers of Nirvana and Townes Van Zandt and a solo rendition of “Dueling Banjos.” Good stuff!

Water Cat was very well received and it sounds like they will be back at Carmody before the rest of the year is out. I’d encourage you attend their next session for a nice change of pace.

And by the way, there has been a change in the Carmody website. You can now find it at carmodypub.com and be apprised of upcoming music there.

As I look ahead to the holiday season there are two musical offerings I will be sure to attend: The Jimmys at West Theater on Dec. 8, “A Willowgreen Winter: Celtic Music for the Season” at 7 pm Saturday, Dec. 17, at SHMC.

And be aware of an upcoming special listening event at SHMC – Low’s Christmas Album on the Winter Solstice, Wednesday, Dec. 21. Scott Lunt is organizing. Look for details in the coming weeks.