Baseball rivals prove to be friends for life 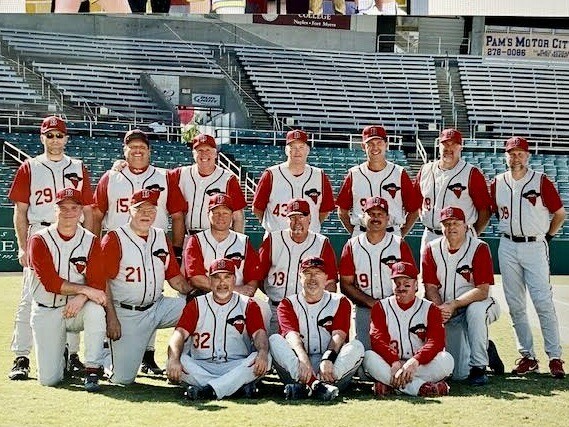 A couple of weeks ago, I got a phone call from Jim Dyvig, saying he and Paul Tate, another good friend, were driving up from the Twin Cities to take me out to lunch.
I was surprised, although it was great to hear from Dyvig, who spent part of his younger days in Cloquet and wound up starting an Over-35 baseball team in New Hope years later, in a league where I ran the Shoreview Hawks for 20 years.
We were always good friends, and intense rivals, but Dyvig proved capable of defusing my own competitive fire every time our teams played, whether in New Hope or in Shoreview. He had spent a career working in the food business, and you could tell, because after every game, he would organize and operate the ultimate tailgate party, grilling burgers and hot dogs, or something more exotic.

He always made sure to have enough for the opposing team, and my players quickly learned that you might miss some games, but you didn’t want to miss the New Hope games,
The timing of all this, leading up to Thanksgiving Week, underscored the more subtle things I have to be thankful for, especially this year, when my own family has risen to the top of my support ladder while I recovered from a heart issue.
Dyvig and I shared another characteristic about baseball. We both insisted on playing the game “the right way.” You could say we were both purists about the game, and it showed by our attention to detail and by the players we tried to recruit to join our teams.
As the century changed over to 2000, Jim Dyvig decided to enter an invitational age-regulated national baseball tournament at the Twins training facility in Fort Myers, Fla. He took the nucleus of his New Hope Bandits and renamed it the Minnesota Bandits, and he asked me to come along and play.
We had a great time, and I went two years in a row, in 2003 and 2004. I had injured my throwing arm trying to make an acrobatic play at third base in our final regular-season game, but I figured it would be healed with a couple months of rest before we had to go to Fort Myers.
Jim knew I always had a strong arm, whether pitching, playing shortstop or third base, and he knew you could never have enough pitching to get through six or seven games in five days. I was flattered to go along, because I could still put the bat on the ball consistently as well. But when we got there, I realized I couldn’t throw hard without excruciating pain.

So I asked Jim if I could play second base, because I would only have to throw to first from there.
After three or four games, Jim asked if I could pitch the next day.
I swallowed hard and said, “Sure.”
We played a couple games at Hammond Stadium, the primary Twins spring training field. I went out there and gave it everything I had. Jim was catching.
Now, back on my own team, my fastball was a true weapon, but my curve ball was the team joke, because it spun properly but barely broke and was easy picking for an astute hitter. So I just reared back and lived by sailing fastballs.
At Fort Myers, throwing only what appeared to be change ups,  I struggled through the opposing lineup once. We made some good defensive plays so we were still in the game, but now their best hitter came up, a lean, strong, left-handed swinger.
He hit a couple tape-measure foul balls, so I got two strikes on him, and at 3 and 2, I kept shaking Jim off until he’d signal for a curve, because I could lob the ball high enough so the trajectory reached the plate.
I launched my pitch, in a high arc, and the batter waited and waited, then took a mighty swing — and missed, for a strikeout!
Nobody was more surprised than I. Jim brought in someone else to relieve the next inning, to my great relief; I had managed to conceal my embarrassment.
The next day, we were hanging around the souvenir shop and a fellow walked up to me and asked if I had been the pitcher the day before for the Minnesota Bandits. I acknowledged that I had been.
Turns out, he was their slugger, and he said, “I just want you to know, I’ve been playing ball for years, and I’ve never seen a curveball like as that pitch you struck me out with.”
I thanked him and assured him that he had made my day. Or maybe my week! I couldn’t wait until I could tell my players back in Shoreview that my curve had gained fame.
That year, I had written a book on Gopher hockey reclaiming NCAA prominence, and I arranged to set up a table at the pro shop end of Mariucci Arena to sell a stack of books during a Gopher game.
Jim Dyvig walked up and bought a book for his father, who was with him. Jim recalled that when we met two weeks ago.
“When I introduced you to my dad, you jumped up from the table, shook his hand, and said, ‘First off, I want to apologize to you for what I did to your son, when he was my catcher down in Fort Myers’,” Jim said.
We had a good laugh about that, as we ate a great sandwich at Corktown Deli in Lincoln Park.
Back in June, when I was released from a hospital in Fond du Lac, Wis., Paul Tate had called me to find out what happened. As a Gopher hockey loyalist, we had talked often about the state of the Gophers over the years, and I filled him in on all the details of narrowly avoiding death when my heart stalled, requiring stents inserted in three of my arteries.

He was probably the first person outside my family that I talked to about it the complications of surviving and recovering.
“When I heard what happened to you,” Dyvig said, “I called Paul Tate and told him I was going to drive up and take you to lunch, and he wanted to go along. We just drove up and back, except for a side trip I made to show him around where I used to live in Cloquet.”
Jim also explained his philosophy of putting a team together.
“I love to win, but I don’t care about winning as long as I can play with my friends,” he said.
It was probably 30 years ago since we played against each other the first time in the Over-35 league, but here I was, learning how baseball opponents might seem like ships passing in the night, but sometimes you find out that you have made friends for life, like I’ve done with Jim Dyvig and Paul Tate.

A couple weeks after that, our relationship came back to me with a jolt when I read that Dennis Denning had died.
Denning, former baseball coach at Cretin-Derham Hall, where he won a half-dozen state championships, and at St. Thomas College, where he won national NCAA Division III championships, had struggled with some health problems for months.
I remember going over to St. Thomas to interview him when he made the move, and as we finished the conversation, I told him about the Over-35 league, and recruited him, and John Mauer, his assistant, for the Shoreview Hawks. Dennis’s arm was worn out, but he could still play a flawless second base, while Mauer, a cousin to Joe Mauer, was our catcher.

We had a couple great years together, then I encouraged him to start his own team, based on his old Cretin buddies.
But I also considered him a friend for life, because of our amateur baseball connection, and losing him is a jolt. It reinforced the realization that it is far better to retain lifelong friendships. They might seem like friends from the past, but it’s easy to make them friends of the present.
Jim Dyvig, Paul Tate and I proved our reconnection was easily done — a lot of laughs, great memories, and the realization that if you don’t keep those lifelong friendships alive, the time will come when you can’t get ‘em back.
Big UMD weekend
The UMD basketball teams kick off a big weekend on the home front when they both play Minnesota-Crookston in a doubleheader at Romano Gym. Then the two Bulldog hockey teams take over for doubleheaders at AMSOIL Arena Friday and Saturday, with the women facing No. 1 ranked Ohio State in the afternoon and the men taking on Colorado College at night.

The women will try to prove they can climb up to the status of the “Big Three” WCHA powers – Ohio State, Wisconsin and Minnesota – while the men need to start consistently asserting their strength in the NCHC scramble.
The men’s basketball team used a simple formula — close-range buckets nd free throws — to beat Michigan Tech last Saturday, but the strategy was employed better against the Bulldogs by a slick Northern Michigan outfit, which pulled away to beat the Bulldogs 90-76 on Sunday.
The Wildcats shot 57.1 percent from the floor in the first half and 50.0 in the second, while UMD was an impressive 53.1 percent in the first half but an unimpressive 41.7 in the second.
The Wildcats were 5-5 on free throws in the first half and 13-14 in the second, while the Bulldogs were 5-6 in the first half but slipped to 12-19 in the second half with some critical late-game misses.
Statistically, both teams had three hot hands, with UMD getting 22 points from Austin Andrews, 19 from Charlie Katona and 18 from Drew Blair, but Northern showed Max Bjorklund with 26, Max Weisbrod with 23, and Brian Parzych with 22.
The deft outside shooting of Bjorklund and Weisbrod kept the Wildcats ahead even after UMD cut the deficit to 76-73 and 78-74.