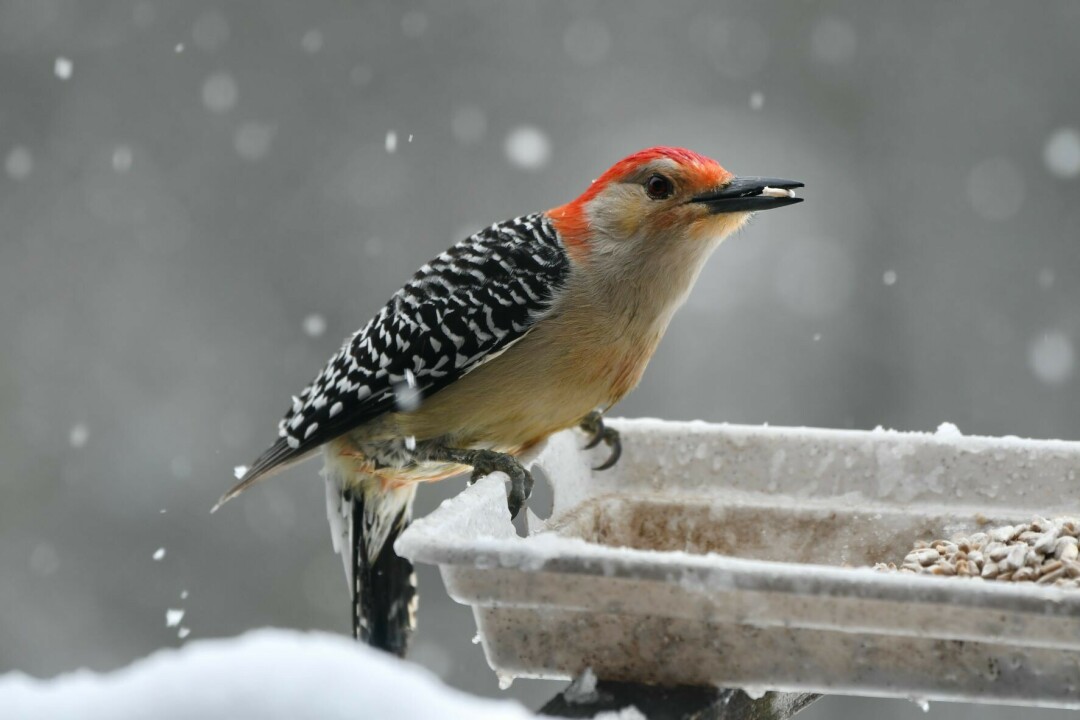 Red-bellied woodpeckers may use our bird feeders to help them survived extra-cold days as they move north even faster than winter warms. Photo by Larry Stone.

On a sunny afternoon at the end of October, I motored slowly out the gravel driveway of the Forest Lodge Estate. I was smiling to myself about wonderful discussions and progress made at the Natural Connections Writing Workshop (you’ve recently read two essays by students of that workshop!) when a flash of color caught my eye.

The bright red head and finely barred back was unmistakable: a red-bellied woodpecker!
I’m very familiar with this medium-sized woodpecker from growing up in Iowa. They frequented the feeders at our house in the middle of a restored prairie, and their high-pitched squawky call echoed from the nearby forest.
As a middle schooler, their calls reminded me of the distinctive laugh of a certain cute boy in my class. Sometimes hearing it still makes me laugh!
While downy, hairy and pileated woodpeckers are all common in my new, Up North home, I can’t remember if I’d ever seen a red-bellied, or have just heard occasional reports of others seeing them.
But just a few weeks after the writing workshop, a thunk made me look up, as a bird bigger than a chickadee landed at the feeder suction-cupped to my bedroom window (out of reach of bears).
Was this the same red-bellied that I’d seen in Forest Lodge?
One of the benefits of my little window feeder is that I get to see birds at odd angles.
As the woodpecker clung to the plastic tray, his tail curved way underneath in search of a hard surface to brace against. Woodpeckers use stiff tailfeathers like a kickstand for balance. This awkward position gave me a clear view of his belly, where his namesake splotch of pale red feathers was visible.

Those red feathers are subtle, and not obvious from all angles. The name of this creature is a throwback to an era when birds were “collected” by shooting, and described with a dead body in-hand.
As a result, these are one of the most confusing birds for beginners to identify. With the neon-red head of the male, which on the female is shifted back to be just a red nape, red-headed woodpecker seems like a better name.
The problem is that moniker already belongs to another bird who deserves it – another bird on a different trajectory.
Red-headed woodpeckers have declined by more than 50% since 1966, and red-bellied woodpeckers have seen a dramatic range expansion from central Wisconsin to southern Ontario since 1950.
Similarly, Northern cardinals, Carolina wrens and tufted titmice have all been shifting their ranges northward in recent decades, with warming winters blamed as a driving force behind the shift and access to bird feeders helping them along.
A habitat modeling study done by researchers associated with the Department of Ornithology at the New York State Museum, revealed something else about the movement of the woodpeckers, though.
Red-bellied woodpeckers aren’t just expanding north into areas that now have the milder winter temperatures they are used to. The birds are expanding beyond their previous comfort zone and have somehow adapted to survive colder winters.
I can relate. The climate hasn’t quite warmed enough to make winters in Northern Wisconsin comparable to the weather I grew up with in Iowa, but I’ve tweaked my wardrobe and thickened my blood enough to make the cold survivable.
I’ve also gotten bigger, since growing from a child into an adult. Having a larger body size is an advantage in colder climates, with less surface area per volume to result in heat loss.
Decades ago, red-bellied woodpeckers near the northern edge of their range were larger than their southern counterparts. This makes ecological sense, and is an example of “Bergmann’s Rule.”
Surprisingly, though, the researchers found that the woodpeckers who are at the forefront of their current range expansion aren’t the big ones. They must have figured out other ways to survive the cold.
Just like we might use cookies and hot soup to get us through subzero days, the woodpeckers benefit from extra food at our backyard bird feeders, which they’ve been recorded visiting more frequently on the coldest days.
Some of their expansion seems to be tied to habitat more than temperature. While I’ve had to get used to the closed-in feel of thick forests after a childhood spent gazing over rolling hills of corn, the woodpeckers have expanded their range from forests into open farmland.
Whatever the details, red-bellied woodpeckers are an excellent example of how generalist species can be adaptable in the face of climate change.
That’s no reason to stop trying to slow the warming of our winters, but just like their flashy red head, it’s a bright spot on the landscape.