My five-year report on learning French 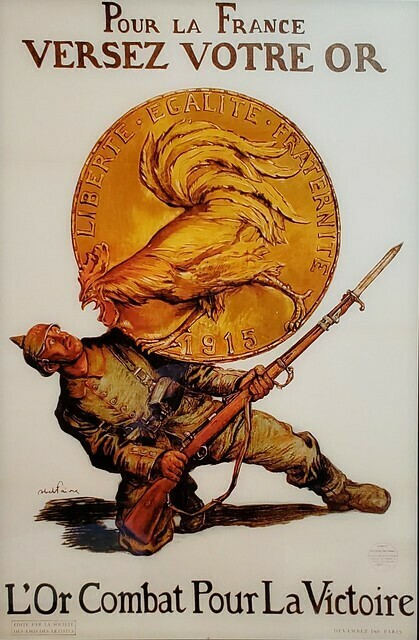 A poster from Verdun, France, that Harry thinks is more interesting than another Eifel Tower pic from his 2018 travels to the French battlefields of WW I

In my absence from the Duluth School Board, my old colleagues inadvertently gutted our teaching staff to pay for new buildings.
When I got back on the board, students at short-changed Denfeld High requested that we offer them a fifth year of French classes like those offered at East High.
The dilemma was resolved after voters retired me in 2017. Duluth no longer offers French.
I wonder if Duluth’s academic retreat played a part in my taking up French? It wouldn’t be the only reason.
The following year I was planning a 100th anniversary journey to the French battlefield where my Grandfather’s heroics earned him a Congressional Medal of Honor. I figured a 30-day trip might be better if I knew some magic words. Besides that my Mother’s Alzheimer’s offered further motivation. Multi-linguists are better at fending off inheritable dementia.

I’d always thought the best way to learn a second language was to live in a foreign land, so I avoided foreign languages in high school. While fancy, big-shot universities required it on high school transcripts, I planned to attend Mankato State, where it wasn’t necessary.
Even there I’d have escaped language had I not decided at the last minute to get a teaching degree. That required a year of foreign language. I squeaked by with a GPA poisoning D+ average in Spanish.
Meh! I just wanted to teach history.
While language classes had little allure for me language’s role in history always did.
Just after college I read the 460-page book The Story of Language by Mario Pei. My old copy is full of yellow marker lines, one of which highlights this gem: “The Romans had a saying, Verba volant, scripta manent (“What is spoken flies away, what is written endures”)…”
The Romans took language seriously and handed that ethic and their tongue to the Gauls Caesar conquered.
I finally took up French a week before I turned 67. Five months in I gave an initial report to the Reader in a column titled “Pardon Mon French.” (ICK!) It was published on the Ides of March, 2018. Sorry Caesar! Its now time for my five-year report.
I started with Duolingo, a language learning app that had been five years in the making and was still evolving. (that’s the subject for my next column)
Duolingo had a jaunty motto that suggested it would only take 15 minutes a day to learn a new language. I hoped that the nine months until my debarkation for France would be sufficient to parlez vous my way around France.
Yet when I got to the battlefield I was effectively speechless. As people in Duluth who have seen me run for office 20 times know, I’m nothing if not stubborn. Falling short only made me dig my heels deeper into Duolingo.
After returning to the good old Etats Unis I found a speech by a young woman giving a Ted-like talk to a convention of polyglots (multi-linguists). She had five languages under her belt and was offering advice.
She urged us to stick to one language at a time and study it for an hour a day. She was learning a new language every two years at that rate.
What particularly stuck with me was a picture of a small boy and the advice, “The best time to learn a foreign language is age five. The second best time is now.”
It’s been “now” for me for five years.
My 15 minutes quickly became an hour, then two. Last year I took a second month-long jaunt to France. That time I managed some tortured French conversations. Like Hillary, I persist.
I have acquired a collection of French books, comics and miscellany. I’ve watched lots of English subtitled French language television with my accommodating partner.
Whether you are learning French or not I recommend the series Lupin and Cherif. Peppa the Pig in her French incarnation has done wonders. Lately,
I’ve started watching the app LingoPie to speed up my snail’s pace. It offers thousands of hours of video with French/English subtitles and the ability to slow them down, stop them and translate words and phrases. I want to leave my snail’s pace in the dust.
Three years ago a charming ap called Hello Talk ,which allows people to teach each other their native languages, led me to a three-year friendship with my most enthusiastic teacher. I’ll call her Adelaide.
We message each other on Facebook almost daily, having ditched Hello Talk as I advanced. It was my pen pal’s screen capture on my 10 commandments snow sculpture that I shared in last week’s column.
Actually, Adelaide had taken years of English, starting in grade school, but I was her first regular contact with American English.
Between Duolingo and Adelaide I’m close to conversational, albeit through typing. Since I plan on living to age 100, that gives me me a quarter-century to use the French I’m on the cusp of understanding.
Vive La France!
Welty also shoots his mouth off at Lincolndemocrat.com