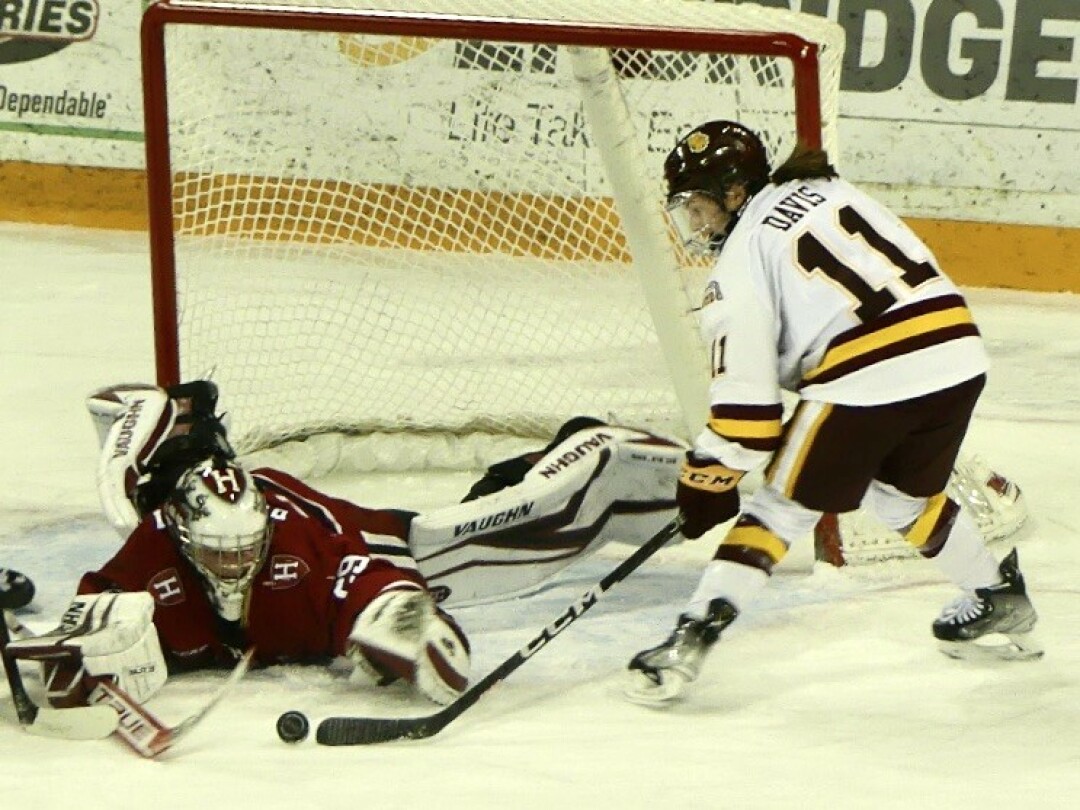 UMD’s Katie Davis battled to score her first goal of the season, making it 3-0 over Harvard in Saturday’s romp. Photo by John Gilbert.

Sertie is back home on the Range for Thanksgiving. The Iron Range, that is.

The revelation was a shock to all of us when we heard, much as it was to Sertich when he first went in for an examination after feeling out of sorts a month ago.

My wife, Joan, and older son Jack joined me for a Saturday visit to see Mike in the hospital, an indication of our friendship through the years that started with hockey and became personal for our whole family.

“Absolutely I’m staying optimistic,” said Sertich Sunday by telephone after he returned to his rural Virginia home to find neighbors had shoveled his driveway and patio clear of all that snow we had while he was gone.

“When they said they’re not sure, but they suspect Stage 3 until I have more tests, that’s where I’m taking it.

“I’m not going to sit here and feel sorry for myself. That’s not in my nature.”

Sertich’s daughter, Lori, has started a CaringBridge section for Mike, and she has thoroughly described the physical chronology there very well. But it can’t fully describe the long relationship I’ve had with Sertich, which includes two years when he and his son John joined my sons and me for crazy van rides to watch the Indianapolis 500.

As a group, we’ve probably never laughed so heartily or so much as on those trips.

I got to know Sertich when he played for Ralph Romano at UMD. When I asked him how many goals he scored in his college career, he said, “One, and I’ve still got the shinpad I scored it with.”

He amplified that Sunday: “I scored one against Michigan Tech, and I got one against West Point my sophomore year, and that one went off my shinpad. I told Ralph if he had played me regularly, I’d have scored 850 goals that year.”

Years later, Romano reluctantly named Sertich interim coach to take over for Gus Hendrickson, expecting it to be a temporary fix. The Bulldogs had a great season and Sertich was named WCHA coach of the year. Then he won it again, and for a third straight year.

I asked Sertich if the “interim” had ever been removed from his title, and it hadn’t been. So I referred to him as the longest-running interim coach in history.

In my 31 years writing about all levels of hockey at the Minneapolis Tribune, I covered those 1984 and 1985 UMD teams that went to the NCAA final four – before the basketball elitists in the country patented those generic word for their sport only – and make no mistake, those were the best two UMD teams in history.

True, Sertich’s teams never won an NCAA title, but they lost a 4-overtime championship game classic to Bowling Green in Lake Placid, and they lost a semifinal the next year in Detroit in two overtimes to RPI.

Those teams had the likes of Tom Kurvers, Norm Maciver, Bill Watson, Brett Hull, Mark Odnokon, Bob Lakso, Skeeter Moore and dozens of others. And the popularity of those teams lifted UMD’s reputation and expectations, which helped Scott Sandelin take over and subsequently build the teams that won three NCAA titles.

Sandelin, who played at Hibbing and was recruited by Sertich before deciding to play at North Dakota, was hired by Bob Corran, who seemed obsessed with changing the guard at UMD.

Sertich and I were in close contact in those days, and he told me repeatedly, and confidentially, that, “He’s out to get me.”

I told him I didn’t see that as a possibility, but one day he called and said, “He got me.”

He explained that Corran wanted Sertich to retire, and told him if he did, he would pay him the remaining years of his contract, but if he didn’t, Corran would fire him and not pay him. So Sertich agreed.

I drove to Duluth for the press conference, attended by all the Duluth newspaper, radio and TV media, and Sertich stood at the podium and said he was tired of coaching and was stepping down to allow someone else to take a turn.

The media all reported exactly what was reported and released. In my story, however, I wrote “Mike Sertich got resigned.”

It was the only accurate account, but of course I had inside information. And Sertie loved that line so much he’s used it various time since.

Nobody even seemed to notice the irony when, a very few months later, he accepted the challenge to take over the coaching reigns at Michigan Tech.

But all the confidences and laughs and soul-searching we’ve shared are now just the background music for the real-world drama now unfolding.

Sertich has always proven to be a forceful and stubborn son of a gun, and both of those characteristics can help him immensely in his  battle moving forward.

Give ‘em hell, Sertie, and if some cosmic energy can help you get through this, you’ve got guaranteed support from everyone ever connected with UMD sports.

There are a lot of reasons why Thanksgiving 2022 is coming at a time when we all can appreciate it. Some more than others.

Consider, for example, the Vikings. Both lost last weekend, but the Vikings didn’t just lose, the got humiliated 40-3 by Dallas last Sunday afternoon at home.

Dallas scored on its first seven possessions, while reducing the 8-1 Vikings from contender to pretender.

The Cowboys defense sacked Kirk Cousins a career-most seven times, and prevented the Vikings from scoring a single touchdown for the first time in a decade.

Question now is how will the Vikings be Thursday night, Thanksgiving, when they play host to the New England Patriots.

Turning to hockey, the Wild made a gamble and put its injury-riddled club back in the spotlight when they called up Sam Steel and put him at center on the first line.

The Wild trailed 1-0 from the first period on, and with 2:37 left in the third period, Steel held the puck 20 feet out near the left circle, picked his spot and sniped his shot just inside the far, right post for a 1-1 tie.

Perfect as that shot was, when it went to 3-on-3 overtime, Steel rushed up the right side, pulled up and sent a perfect pass across the goal-mouth, where Alex Goligoski, speeding to the net, tipped it in at 1:12 of the 5-minute extra session.

Goligoski, who had been scratched in 12 of the previous 13 games, was extremely emotional in post-game interviews. The Wild had belatedly picked this game to honor Goligoski for playing in 1,000 NHL games.

The way he rushed the net and scored his first goal of the season can only make you wonder why the Grand Rapids native had been scratched from a defensive unit that had been struggling.

The UMD men and women get a week off this week. The men can use it, after giving up four straight goals to lose Saturday in a 5-3 game at Western Michigan for a spit.

The women don’t need a break after crushing Harvard both games at AMSOIL Arena.

The Bulldogs won 4-0 on Emma Soderberg’s 15th career shutout, although it took three goals in the third period to reward a shot advantage of 56-14.

Anneke Linser scored the first and final goals. On Saturday, Maura Crowell put freshman Hailey MacLeod in goal and she responded to the rare start by posting her first career college shutout in a 9-0 rout.

UMD outshot the Crimson 50-15, and defenseman Maggie Flaherty scored the first two goals, while Gabbie Hughes had a goal and three assists. Katie Davis scored a goal both nights, her first two of the season, and Ashton Bell had an assist each night to join Hughes and Naomi Rogge as the third Bulldog to reach 100 career points.