Give thanks to change of seasons and new cars 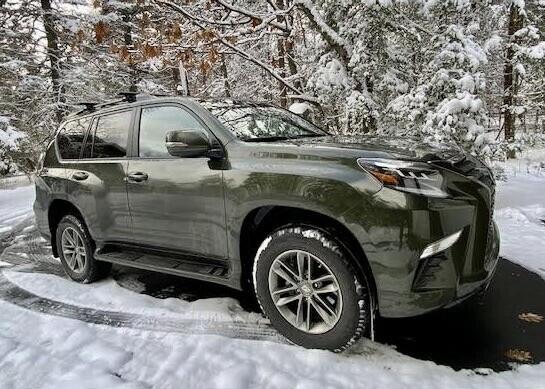 This Thanksgiving Weekend of 2022 is a special one around the Gilbert Compound and the opportunity to test drive an assortment of the latest vehicles in the auto industry is certainly part of it.
Timing is all-important, of course, and sometimes it works out, sometimes it doesn’t.
This year we’ve had a strange autumn transition from summer to winter on the North Shore of Lake Superior, with a surprisingly mild September and October giving way to an often harsh changeover from October to November, when we seem to be blessed with a 4-inch snowfall nearly every day.
The changeover has been enhanced because I’ve had the chance to test a couple of pure-electric vehicles, hybrids and plug-in hybrids, along with numerous gas engine-only testers.
Timing was perfect for a week with the new Lexus GX460, which I’ll deal with more fully in a future issue of the Reader, but we can show the world the unpredictability of our Duluth weather with a photo of the luxurious new Lexus SUV after it breezed through a 4-inch dose of what happens when the Gales of November blow some Lake Effect snow at us and the temperature plunged into the teens and 20s.

Obviously, it was a good time to be test-driving the GX460, which never flinched from the responsibility of getting us through the slippery snowfall.
The timing for the photos didn’t work out when I had the chance to test a new Timberline model of the 2023 Ford Explorer. It was a beautiful dark green, almost black in subdued light, and I thought I captured the look with a rear-angle shot parked in exactly the same location in my driveway, only it was before the first snow, when the black asphalt was covered with a beautiful collection of oak leaves that had changed color and fallen from the nearby tree.

In one of those awkward sessions, when I transmitted the photos to Reader editor Jim Lundstrom, for some reason they didn’t show up. I’m one of those techno-challenged folks who can be contacted easily by phone or message, but if you email me, it might take hours before our balky home Wi-Fi allows it to get through and I notice it. Jim sent me an email, I didn’t see it until after deadline, and the Reader came out with the review but only a syndicated photo Jim obtained.

So as the seasons seem to have decided to change, I thought we could still use one of my shots to underline the transition.
The overriding feeling of thankfulness came in this year of 2022 because of my health ambush back in May, when a clean bill of health at a checkup a year earlier left me totally unprepared for what turned out to be the blockage of three arteries, which led to extensive surgery at a wonderful hospital in Fond du Lac, Wis., and forced a work furlough from May 23 until June 18.

After the impressive staff there had done all they could to get me headed in the right direction, which included pretty much learning to walk and function all over again, I resumed therapy back home at St. Luke’s Hospital in Duluth, and at its affiliate dialysis center in Hermantown.
As I was getting my kidneys up to speed and coordinated with the rest of my body, I was back writing, going to games and test-driving cars.
Walking the sidelines and shooting photos at UMD and high school football and soccer games, mostly, was more therapy, even if it only made me appreciate more how long it’s taken form my cardiac rehab at St. Luke’s to get my legs working sufficiently.
So as the seasons changed, to summer, fall, and unseasonably cold early winter, I never appreciated noticing it more than this year. My birthday came and went, and I joked that it was my first birthday where I wasn’t certain I was going to make it — an uncertainty that had replaced the idea that I had been secretly planning to live forever.

I appreciated the warm days, and the harsh wind and even the 4-inch blizzards.
So now we get to Thanksgiving, and I know there’s no stopping my wife, Joan, from preparing a turkey-centered feast that we’ll all appreciate. I will enjoy it more than ever, because it again represents a first for me, a milestone of recovery that finds me in my new 186-pound body that is lighter and leaner than ever, since college days.

And I will be primed to take on test-driving all the 2023 models, having already gotten an early start on them. The upcoming year will be a continuation of the transition from gas-engined cars to EVs (electric vehicles), with maybe an upcoming decade of hybrids during the transition.
Make no mistake, we’re headed for electric futures in our cars, and the infrastructure is expanding by the week, with more and more charging sites that included more and more “Level 3” charge stations.
While it might take 8 hours to fully recharge on Level 1, and 4 hours on Level 2, a Level 3 charger can do the job in maybe 2 hours.
All of which makes the newest edition of Consumer Reports more interesting than most, because their staff of car folks has broken down the various categories of cars and lists them all by manufacturer from most reliable to least reliable, with maybe an asterisk or two along the way.
The evidence indicates that the most reliable vehicles available today are hybrids, with the best gas-engine cars running behind them, right there with plug-in hybrids and pure electric.
Starting from the least reliable, we have Mercedes, Jeep, Volkswagen, GMC, Chevrolet, Tesla, Ford, Cadillac, Ram and Nissan.
Nissan was ranked 15th of the 24 car-makers in the study.
From the top, with a composite score are: 1. Toyota 72, 2. Lexus 72, 3. BMW 65, 4. Mazda 65, 5. Honda 62, 6. Audi 60, 7. Subaru 59, 8. Acura 57, 9. Kia 54, 10. Lincoln 54, 11. Buick 52, 12. Genesis 52, 13. Hyundai 46, 14. Volvo 45, 15. Ram 42, 17. Cadillac 42, 18. Ford 41, 19. Tesla 40, 20. Chevrolet 40, 21. GMC 36, 22. Volkswagen 31, 23. Jeep 30, and 24. Mercedes, 26.

Cadillac, in the process of switching over to EVs, dropped from No, 5 a year ago to No. 17 this year, while Ram dropped from 1 to 16, Ford from 4 to 18th, GMC from 3 to 21, Volkswagen from   No 2 to 22, Jeep from No. 1 to No. 23, and Mercedes from 5 to 24.
South Korean tandem of Hyundai and Kia also have made and are making giant inroads in hybrid and EV manufacturing, and impressive as those may be, they can lead to criticism that lowers their ratings.
Hyundai, for example, was No. 4 a year ago and dropped to 13th after introducing several new EV and hybrid models, and Kia similarly dropped from No. 6 to No. 9.
The biggest rise was from BMW, which moved up from No, 10 to No,. 3 with a tightening of manufacturing techniques.
It’s always interesting to read Consumer Reports because of its overall objectivity, but the ratings can be skewed against companies that are advancing most rapidly into the world of high tech.
Me? I remain objective too, and at this Thanksgiving time 2022, I am more thankful than ever,