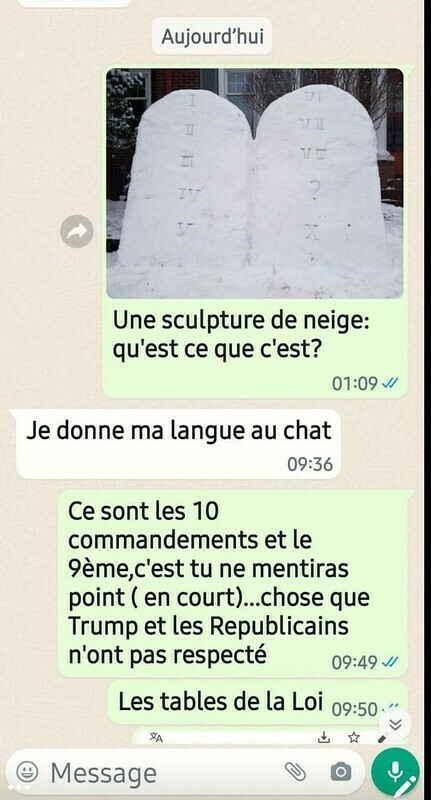 It snowed a couple days ago and I sculpted two simple tablets with the roman numerals 1-10 on them. Well not quite. I made an amendment by omission.
In place of Roman numeral IX, the proscription against bearing false witness, I substituted a question mark.
I wasn’t quite finished with our 2022 midterm elections and the violation of the ninth commandment by a President who said he was cheated out of victory – a president who has probably broken all of the other commandments as well.
The Bible says Moses brought God’s commandments down from Sinai and also that he broke them in a fury. He discovered that while he was communing with God, God’s people had begun worshiping a golden idol reminiscent of Trump Tower. I think there is a message in this that Republicans and Trump supporters ought to take to heart.

Local Republicans may think this column is my upraised middle finger to them, their President and their party. But they are wrong about the finger.
The finger I raise is Mr. Pointer. I imagine raising it like Moses. But maybe rather than Moses I’m just a schoolmarm wagging my finger at children who let a pig loose in the school.
For the past three years I’ve had the privilege of talking politics with a French penpal. Like most Europeans she is well aware of America’s pugnacious Evangelicals.
The French soured on Christianity during their Revolution. The millions who died in two world wars just sped up the abandonment of their cathedrals. No one in France tries to put the 10 commandments up in every municipality. What, I wondered, would my pal think of them? Of course, I sent her a picture and did my best to explain it.

If this sounds like Democrats then Republicans should steal the page back from them.
While I was fussing over my sculpture a neighbor stopped his pickup out front, rolled down his window, and offered some friendly banter. We go back to opposite corners of a kinder and gentler Republicanism. His mother was a pro-life legislator.
As he sized up two suggestive curves in my front yard he asked me if was treading on dangerous waters. I caught his drift and laughed.
I told him his question reminded me of an anecdote I’d read years ago in Readers Digest. In a section called “Life in these United States” I read about a kid who was busy making a snowman in his front yard. It had two alarming protrusions projecting forward from under its head.
The boys parents caught sight of it from their window and panicked. They summoned him inside and angrily demanded to know what he was doing.
Taken aback by their anger the boy stuttered “It’s Jimmy. He’s putting his hands on his head to keep his ears warm.”
A big smile spread across my Republican friend’s face. We need more smiles and fewer “shalt nots” to restore America.
Welty also shoots his mouth off at lincolndemocrat.com