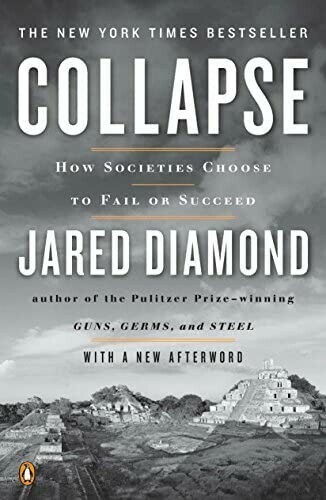 “Only within the moment of time represented by the present century has one species – man – acquired significant power to alter the nature of his world.” Rachel Carson author of Silent Spring, writing during the 20th century.
“...the unifying theme of collapsed civilizations is collective blindness to the depletion of natural resources.” Sara Wheeler in Magnetic North
Humans are the only species that significantly impacts the earth. All species use the earth’s natural resources. But humans are busy overusing nature’s abundance and destroying nature’s life support systems.
Humans have altered the earth’s climate, oceans and geological features. We have created chemicals, radioactive elements and genetic combinations that don’t exist in nature. With nuclear weapons, we have the capacity to actually destroy life as we now know it on the planet.
Scientists tell us that 95% of the Earth’s terrestrial surface has been modified in some way by humans and 85% shows the scars of multiple human impacts.
Humans – with our bulldozers, paving machines, deforestation, resource extraction and industrial agriculture – have had a greater impact on the surface features of the earth than natural forces. Humans move 24 times more materials around the surface of the planet than rivers move sediment to the oceans.

In 1900, human-made objects equaled just 3% of earth’s total biomass. Today human-made objects outweigh living biomass by 100 billion tons.
A tipping point is defined as the point at which “a series of small changes or incidents becomes significant enough to cause a larger, more important change.” Many scientists believe humans and the ecosystems we depend on are reaching – or have surpassed – a number of tipping points.
Several centuries of small changes to the earth’s atmosphere caused by humans burning fossil fuels have resulted in significant, irreversible changes in our climate. Ten-thousand years ago the atmospheric CO2 concentration was about 280 parts per million (ppm). Since the beginning of the Industrial Revolution (mid 1700s) global annual mean CO2 concentration has increased by 50%.

Scientists in 2009 said 350 ppm was the tipping point to be avoided. Today we are at 421 ppm and climbing. This is highest concentration in 14 million years. Now temperatures are rising, glaciers, sea ice and permafrost are melting, and ocean levels are rising.
As a result droughts are occurring all over the world. They are happening in more places, more frequently and lasting longer. As of September 2022, 51 percent of the lower 48 states in the U.S. were in moderate to exceptional drought. Vital water systems in the west and southwest are literally drying up.

But people are still moving to the sun belt and refusing to reduce their consumptive lifestyles.
The chemistry of the oceans is being affected. As the oceans absorb more carbon dioxide from the atmosphere the acidity is increasing. This is threatening aquatic and human food chains and the micro-organisms in the ocean that are the source of half the oxygen in the atmosphere.
Yet we blindly continue polluting, over fishing and dumping garbage in the oceans without consideration for the consequences.
Scientists say humans are causing an unprecedented global mass extinction of a wide variety of species. Humans are causing species to die out at 100 to 1,000 times faster than the natural rate. This level of destruction has not occurred since the dinosaurs disappeared 66 million years ago.
This includes pollinators, which are essential for human food chains. An estimated 87% of the world’s flowering plants are pollinated by insects and other animals (bats, for example). The majority (60%) of fruits and many vegetable need these pollinators. There is no substitute for the beneficial “work” done by these insects.

But many of them are in trouble because of human caused pollution and habitat destruction. Kill off these insects and humans are going to have a very reduced and boring diet.
Ecosystems are fragile phenomena. They are complex and depend on many symbiotic relationships. We don’t know at what point a small change – extirpating a few species, disrupting co-dependent relationships, increasing temperature a few degrees, adding one more pollutant – will be the last straw and cause serious damage to the whole system.

Another tipping point is human population. The world now has about 8 billion people and it is expected to be 9.5 billion by 2050.
Biologists tell us humans, like all animals, are subject to nature’s carrying capacity. There are limits to the resources earth can provide an expanding population. Because of our technologies and adaptability it is difficult to establish a numerical tipping point for population.
But it is pure hubris to believe we can continuously grow the population (or the economy) indefinitely.
To paraphrase Edward Abby: “Unregulated growth – isn’t that what cancer cells do?”
We have become a cancerous growth on the Earth.
Jared Diamond is the author of Collapse: How Societies Choose to Fail or Succeed. He identifies environmental problems such as over exploitation of natural resources, water contamination, soil erosion and deforestation as major reasons for the collapse of former societies. He says these people were unable, or unwilling, to take the necessary action to solve the problems.

He writes that a “recurring feature of collapsing societies is a conflict between the short-term interests of those in power, and the long-term interests of the society as a whole.”
In other words there are also social and political tipping points. When the public good is sacrificed for the short-term interests of the ruling elite, societies tip toward decline.
When the needs of the majority for healthy food, living wage jobs, health care, housing, education or clean drinking water are ignored while profits, stock market indexes, lower taxes or the number of billionaires are the measures of national success, we are on the road to collapse.
But beginning with the election of Ronald Reagan in 1980, this is what has been happening in our country for the last that forty years.
The recent midterm election was another tipping point. Fortunately the predicted “red wave” did not occur. We very narrowly avoided the collapse of democratic government (or at least the facade we call democratic government). But enough corporate shills and science deniers got elected to ensure a divided government.

Gridlocked government will prevent the decisive action needed for addressing climate change and other environmental problems.
The result will be a continuing downhill slide as we blow past more and more tipping points. We may or may not collapse abruptly, but it is increasing unlikely that we will act in time to avoid a grim future.