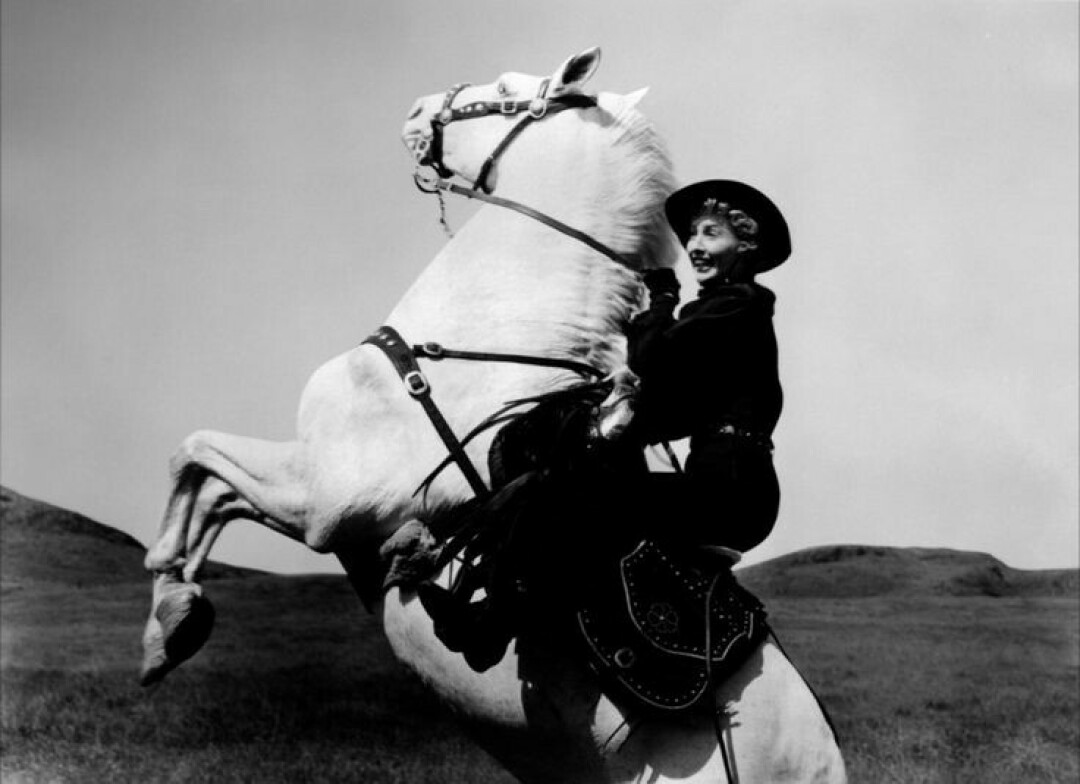 Samuel Fuller’s 1957 western Forty Guns opens with a rip-roaring parade of the titular 40 guns astride thundering horses, well behind their leader Jessica Drummond (Barbara Stanwyck), creating one of the most striking entrances in film history.
It’s a magnificent opening scene.
First we get a bird’s-eye view of a stark, dry landscape, complete with a bit of bird song, with the shadow of clouds leaving their temporary mark on the land below, where we can just make out a buckboard led by two horses. We can also hear it creaking.
Then we hear the thundering of horses and are treated to a shot of horse legs running. Then the horses come down a hill, a figure in black astride a white horse leading the way. Raising dust on the dirt road, they scatter on either side as they pass the spooked buckboard horses. The three dusty men in the wagon silently turn to watch the column ride away, and then the music starts and we see Stanwyck riding hard atop her magnificent white steed, 40 men on dark horses in two columns behind her.

Slam-bang openings are a Fuller trademark, or as he once described it: “Seize your audience by the balls as soon as the credits hit the screen. Hang on to them. Smack people right in the face with the passion of your story. Make the public love your characters or hate them, but for god’s sake never make them indifferent.”

I have to admit that Barbara Stanwyck might be my favorite actor – male or female – of all time, especially for her early, pre-code movies such as Baby Face, Night Nurse and The Purchase Price. I admire her work so much I can almost overlook her staunch conservative Republicanism.
In front of a camera, she is always believable, and can do it all – comedy to tragedy. For comedy, no one does it better than she did as the cunning and mischievous daughter of a con man opposite Henry Fonda in Preston Sturges’ The Lady Eve. Her femme fatale in Billy Wilder’s great film noir Double Indemnity forever set the standard for conniving noir women.

Director Douglas Sirk, who made two films in the 1950s with Stanwyck, once said of her in a Film Comment interview: “And you know there is nothing, nothing the least bit phony about her ever. Because she isn’t capable of it. That insignificant little picture she did with me and she played all of it right out of herself. And yet she is so discreet – she gets every point, every nuance without hitting on anything too heavily. And there is such an amazing tragic stillness about her at the same time. She never steps out of it and she never puts it on, but it is always there, this deep melancholy in her presence. I think she is more expressive and resonant than almost any other actress I worked with.”

I think Samuel Fuller loved her acting too, and, in essence, wrote this part for what is her last great movie. The original script was titled Woman with a Whip.
After working with her on this film, Fuller said of Stanwyck: “She had thousands of closeted thoughts she can draw on at will.”
Stanwyck was 50 when she made this. She was a tiny person (her bio says 5’5”, but I think that’s being generous), and she insisted on doing her own stunts for the film, including the hard horseback riding her character does, and a scene where she is dragged by her horse as a tornado approaches.
Fuller also does some amazing horizontal framing in Cinemascope – Fox’s proprietary widescreen system – that makes Stanwyck dominate despite being smaller than everyone else in the shot.
Stanwyck is also upsetting the idea that Hollywood relegated women after 40 to playing grandmothers. Stanwyck here is athletic, strong and sexy – and she’s 50!
Stanwyck’s character, Jessica Drummond (it was the second time she played a character with that name – the first was in My Reputation in 1946), is a Western cliche with a gender twist. She is a self-made woman who, through smarts, moxie and corruption, has become the leading rancher in the region. She controls the weakling sheriff, played by Dean Jagger, who seemed to specialize in weak characters for a time in the ‘50s (see Bad Day at Black Rock, 1955, which also features a weakling played by John Ericson, who is Stanwyck’s younger bullying brother in Forty Guns). The title refers to the 40 men who work for and ride with her.

However, the big difference here is that in your typical Western, the power-mad rancher is an irredeemably corrupt villain who in the end must either be stripped of power and status or die.
But because a woman is the source of power here, Fuller imbues her with more empathy, more humanity, than your typical Western antagonist. She is not as ruthless as a man in her position would be, and she is, in the terms of protagonist Griff Bonnell (Barry Sullivan) “bigger” than he is by forgiving him for killing her younger brother, a grown-up juvenile delinquent named Brockie (John Ericson)

Since the story takes place in Tombstone, Cochise County, Arizona, there is a sense that Fuller modeled the three Bonnell brothers after the Earps. That would make Barbara Stanwyck’s character one of the Clantons.
In Fuller’s original treatment, Bonnell shoots and kills Jessica Drummond. Studio head Darryl Zanuck was OK with that because he liked and trusted Fuller, but 20th Century Fox’s marketing department said there was no way they could sell a film where Barbara Stanwyck is shot down at the end.
Fuller changed the ending, but the hero still gets to shoot Jessica, with with a well-aimed wounding shot,just so he can get to her brother, who he shoots down in a series of wounding shots before the fatal one.
If you watch Forty Guns on the Criterion Channel, make sure to watch the three extras that come with it, which include comments about the movie from Fuller’s second wife Christa Lang Fuller and daughter Samantha Fuller; an appreciation by Imogen Sara Smith, author of In Lonely Places: Film Noir Beyond the City, in which she discusses the noir elements of Forty Guns and talks about Fuller being a “genre unto himself”; and there is A Fuller Life, a fascinating feature-length documentary made in 2013 by Samantha Fuller that features mostly actors who worked with Fuller during his career, as well as several directors (Wim Wenders and Joe Dante), reading from Fuller’s autobigraphy A Third Face: My Tale of Writing, Fighting and Filmmaking.

The title of the documentary by his daughter is fitting – this guy did have a much fuller life than most. The New York City native started out in the newspaper business – first selling them on the street and then reporting on crime.
“I was fortunate enough to spend my days and nights at the most scintillating profession on earth and getting paid for it,” Fuller wrote about his newspaper days.
Yes, do not miss the documentary.