An evening of new music at SHMC 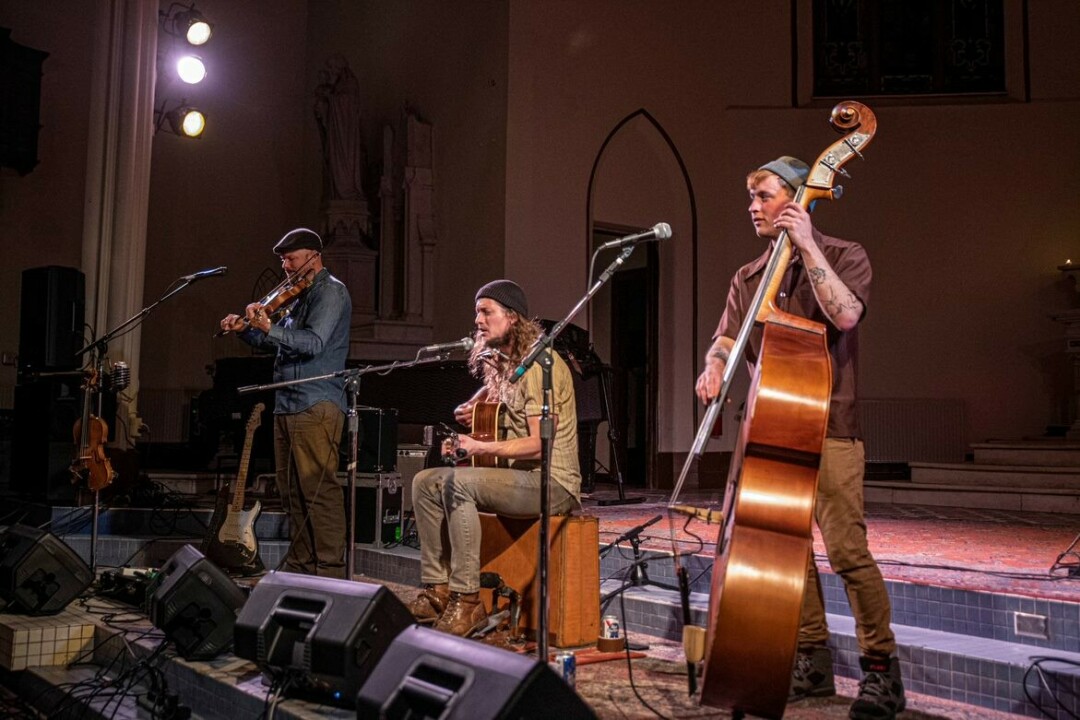 Musician musical chairs continued this week as another “new” band was formed: brothers Jacob and Owen Mahon, of New Salty Dog, were joined by Russ Sackett of the duo Hodag and Hooch to create 4th Street Electric Boogaloo In Blue. The newly configured band debuted by opening for Milwaukee-based Joseph Huber and his cohorts at Sacred Heart Music Center on Friday, Nov. 11.

(It appears H&H, with Daryl Yankee, which has played regularly at Thirsty Pagan in Superior, has either dissolved or is on hiatus. Yankee continues performing as a member of Ten Crow Moon).
The threesome that makes up 4th Street has been jamming in Sackett’s living room recently, resulting in their collaboration on original tunes played for the first time this evening.
As usual, Owen was on drums, while Jacob manned the keyboards and Russ took up the bass guitar.
They began with a slow bluesy tune (“Fish To Cook”) that was quite nice, then it was on to other prosaic topics with wonderfully wacky lyrics sung in a distinctive melodic style.
Jacob has an almost feral sound as he slides up into his higher range that is not unpleasant. The addition of Sackett with his harmonizing vocals was a winner – all their voices combined admirably.
4th Street’s new tunes included “Training at the Casino (to be a Millionaire),” “How Long Can You Stand?” “Broccoli In My Tea” and “Drying Up.” The Mahon brothers are known for original takes on everyday subjects but, joined by Sackett, they outdid themselves this time. A sincere and sentimental ballad, “Song for G” sung by Sackett, contrasted with the more whimsical songs.

Overall it was a most amusing and memorable set by some of our favorite musicians. Fans of New Salty Dog will undoubtedly enjoy their creations.
On to the headliner. It has been seven years since Joseph Huber played in Duluth, though he headlined the Great Northern SquashFest in nearby Chaffee, Wis., earlier this fall (which I unfortunately missed).
He has toured his Americana sound across Europe seven times in the past 13 years and reported that those folks said Americans overuse the word “awesome.” And yet, looking up and around the former cathedral’s soaring space, he thought that was exactly the right word to use for this venue.
I must say the sound this evening at SHMC was just right, at least for us sitting far up front.
Huber had sidekicks Kenny Leiser (fiddle and electric guitar) and Eston Bennett (standup bass) with him on this evening. In addition to his acoustic guitar and harmonica, he worked a suitcase kick drum and foot tambourine, giving each song a strong beat.
From the first tune, “Dog Days,” they provided an energetic set that got folks up and dancing in the aisles. Although I had heard him compared to Charlie Parr (with whom he has shared at least one gig), I didn’t find that to be the case; rather his voice was powerfully clear and in a higher key that was quite engaging.

Huber’s music has been reported as spanning “the spectrum of ‘Roots’ music” while venturing outside the typical boundaries of any particular genre. Most of the songs performed were original.
In this concert he and his compatriots ventured into fast bluegrass numbers (“16-10”) as well as more singer-songwriter fare (“Where You Said You Would Be”) and a traditional-sounding folksy original (“Hanging Road”).
Leiser’s fiddle-playing was responsible for much of the bluegrass sound and he became seriously animated when he switched to electric guitar.
Not to be outdone, bassist Bennett provided great bass licks, especially on the slower tune, “A Northwoods Waltz.” The overall impression I had of this very tight trio was of buskers having a good time doing whatever they felt like.
As I have written previously, it is always heartening to see local musicians in the audience and I believe they made up a substantial percentage of the ticket-buying public at this show.
The place was not filled to capacity, but the turnout was decent enough to turn a profit for SHMC. Folks were certainly impressed with Huber and were rewarded for their sustained applause with a rousing encore, “Dance Around the Daggers.”
Hopefully more Twin Ports locals will check out the many excellent concerts on offer by SHMC in the months ahead.
And as a reminder, award-winning pianist Nachito Herrera, a native of Cuba now living in Minnesota, will perform hot Cuban and Latin jazz there on Saturday, Nov. 19. Check him out on YouTube. It promises to be an exciting and extra special concert. Hope to see you there!