For 2023, Silverado moves upscale with options 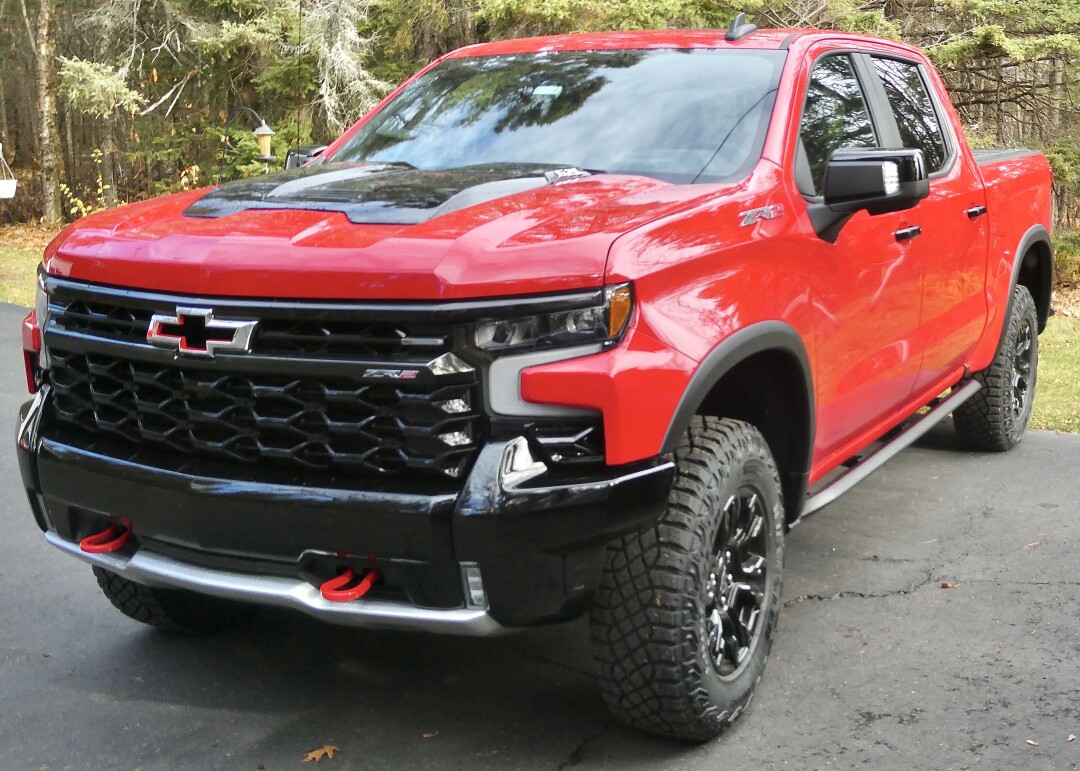 If objectivity means nothing to your taste in pickup trucks, you can remain looking with tunnel-vision as you say “Time to buy a new Chevy,” or Ford or Dodge Ram, or Toyota, as personal prejudice overrules all.
For the more objective, it has become apparent that the Chevrolet Silverado has slipped behind those fierce competitors, however, and most magazine analyses as well as comparative drives prove that the others have moved ahead and pulled away from the still-popular Chevy.
But as we hurtle into the 2023 model year, it may be time for truckies to take another look at the Silverado, because it appears the mainstay of the General Motors fleet has at least caught up and maybe regained the stature always reserved for it by Chevy boosters.
I had a chance to spend a week with a 2023 Silverado, and it was the loaded ZR2 model with everything on it, including 4-wheel drive, tow package, ZR2 off-road equipment and the technology package.
It didn’t have the fanciest leather seats, but it was comfortably supportive, and put the driver in control.
That is, once the driver can scale the mountain to get into the cockpit. There is what appears to be a running board, but it is one of those new-fangled pipe-like rails right up flush against the bottom of the body sides. Chevrolet calls them dealer-installed rocker guards, which made my hunch correct – they don’t fit even the toe of your shoes or boots, because they are designed as rollbars for the rocker panels, in case you go off-roading.

The ZR2 package encourages that, as well, by raising the body 2 inches, and adding special dampers and skid-plates to the underside.
While the new Silverado may be more adept at driving off the pavement, it remains comfortable as a highway cruiser.
But pickups nowadays are aimed at raking in huge profits for the manufacturers, and many buyers buy them as partial SUVs without the need for work-duty beyond hauling tents and stuff up to the cabin.
Also, it means the interior better be slick enough to attract attention, the way the new Ford and Ram do. They, in fact, have escalated the ante on interior appointments, and on meaningful additions to the bed and other areas.
Toyota has kept pace, on a lower-number basis, all of which leaves plenty of room for the Silverado to catch up.
The ZR2 grille does its part, finished in a gloss black bit of grillwork, same as the painted wheels. The bed has this multi-adjustable tailgate that includes a top switch that lets you fold down only the top half of the tailgate, and the ad campaign shows a construction engineer using it as a stand-up desk to do a little computer work before letting down the rest of the tailgate for extracting tools and equipment.

The tester was priced at $77,400, which includes the technology package and sunroof and assorted other options. The base price on the truck was $69,800.
The test truck, in brilliant “Red Hot” paint, was powered by the huge 6.2-liter “EcoTec 3” V8, a throwback to the heavy-duty pushrod era when everybody fought to produce the biggest-displacement engines.
Chevy has caught on to the new technology, as well, and I am impressed that the new 2023 test Silverado compared well with the 2022 models I drove, and which show the versatility of the new trucks.
Last year, I had one Silverado with the new and high-tech 3-liter turbo-diesel, and another with the even newer 2.7-liter turbocharged high-output V6.
Comparatively, if fuel economy matters – and it does – the diesel delivered 20 miles per gallon city and 23 highway, the 2.7 V6 showed 17 city and 20 highway, and the new tester’s 6.2 gas engine had EPA estimates of 14 city and 17 highway, with the 10-speed automatic.
Maybe that’s not poor enough to distract the Chevy buyer from the big engine, but if you spend much time on the highways, getting 20-23 mpg is a lot more economical than 14-17 with the 6.2.
Appearance-wise, however, the comparison is impressive because the new Silverado with the fancy trim has amore macho demeanor, and, in my opinion, doesn’t take a back seat – and all Super Cab or Super Crew or whatever have large and spacious rear seats – to the Ford F-150 or Ram.