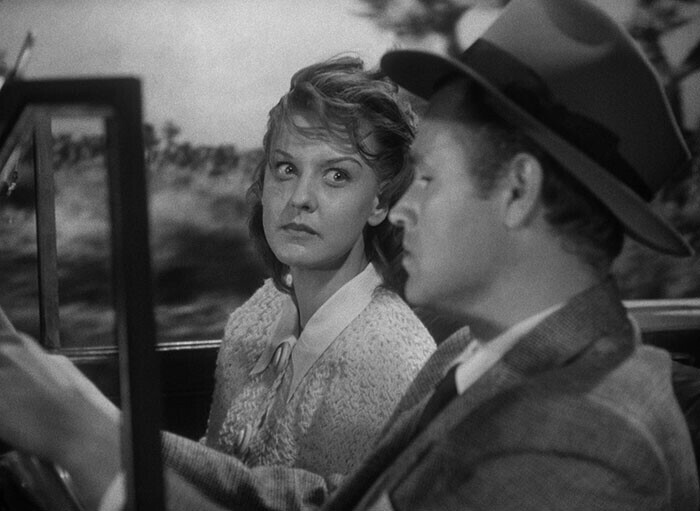 Vera’s (Ann Savage) true nature is revealed in her glance at Al Roberts, who she suspects is as bad as she is.

“Whichever way you turn, fate sticks out a foot to trip you.”
– Al Roberts in Detour

That, in a nutshell, sums up film noir.

The line, uttered by the sad sack protagonist in Edgar Ulmer’s 1945 Poverty Row noir masterpiece Detour, pretty much sums up the noir dilemma – a guy, or sometimes a dame, is in it deep with seemingly no way out.

Ulmer could understand the noir situation because he lived it, in a way. Like some poor noir sap, Ulmer was sentenced to toil in the low-budget fields of Poverty Row studios after an affair with the wife of Universal CEO Carl Laemmle’s nephew got him blacklisted by the major studios. The woman eventually divorced the nephew and married Ulmer, becoming an important member of his production team.

I will never forget the first time I saw Detour, playing on WDSE on a Sunday afternoon.

As a lifelong fan of film noir, I’d read about Detour before I saw it. My favorite quote of many about it is from filmmaker Errol Morris, who once said it was his favorite film because: “It has an unparalleled quality of despair, totally unrelieved by hope.”

Yes! That really sums up this very dark film.

It’s an amazing ride on the film noir road of fatalism, with Tom Neal portraying talented but broke musician Al Roberts, who has the misfortune of meeting up with one of the most feral femmes fatale in all of film history, a woman played by the aptly named actress Ann Savage.

The movie was a product of Producers Releasing Corporation, one of the so-called Poverty Row studios that operated on shoestring budgets with casts of minor stars or unknown actors.

Director Ulmer learned the movie business in Europe, serving his apprenticeship with German director F. W. Murnau (Nosferatu: A Symphony of Horror, The Last Laugh), who brought Ulmer with him to Hollywood when he emigrated in 1926 to make Sunrise: A Song of Two Humans for Fox.

Ulmer eventually went on to make some Western shorts. In 1934 he made what turned out to be Universal’s biggest moneymaker of the year, The Black Cat, with Boris Karloff and Bela Lugosi.
After being blacklisted by the majors, Ulmer brought his talent to Poverty Row, and Producers Releasing Corporation in particular. He once described himself as “the Frank Capra of PRC.”

Detour shows up among 21 films in the Criterion Channel’s November Noir collection, and it looks amazing because it was given a 4K digital restoration in 2018.

It moves at a quick pace, with intelligence. It is not your typical B picture. It has more character and nuance than many an A picture of the period, and today, even.

Al Roberts is a talented pianist who has become bitter that he and his girlfriend, singer Sue Harvey (Claudia Drake), are working for peanuts.

During a foggy walk home from the cheap New York nightclub where they both perform, Sue tells Al that she is leaving on Sunday for Hollywood.

“Don’t you know millions of people go out there and ending up shining cuspidors?” he says.

She tells him she has to do this while she’s young.

“We’ll be together some day,” she says.

Next we see Al back at work at the club. He looks rough as he’s sitting at the piano. He begins playing a bit of Brahms’ Waltz Op. 39 no. 15, and then turns it into a boogie woogie romp (it was music director Leo Erdody – billed just as Erdody in the credits – who played this and an earlier piece of Chopin Roberts played for Sue).

When he finishes the jazzed up piece, a waiter expresses admiration for the big $10 tip a patron has left for the pianist.

“Say, Roberts, you hit the jackpot this time. Ten bucks!” the waiter says.

But Roberts is in the dumps, pining for Sue.

The 10 bucks to him was “this piece of paper crawling with germs. It couldn’t buy what I wanted.”
He decides to call Sue in LA. We see him smile for the first – and perhaps the only – time when he reaches her. He learns she’s working as a “hash slinger” instead of starring in a movie. He tells her he’s on his way to her so they can be married.

But then there’s that problem with money – “the stuff you never have enough of,” he tells us.
Next we see him in his well-worn suit, battered suitcase in hand, stubble-faced and with a glazed look, walking down a dark road. In the next scene, he’s riding, staring straight ahead, with a guy who’s picked him up.

Later, through inner monologue, he tells us: “I never know what to talk about with unknown drivers.”
It isn’t long before he is picked up by a seemingly friendly fellow, Charles Haskell, driving a 1941 Lincoln Continental V-12 convertible (it was Ulmer's personal vehicle).

Haskell is going all the way to LA and is happy to have a passenger.

Roberts tells us that after about an hour of driving, he notices Haskell has three deep, recent scratches on his right hand. Haskell notices the scars have been spotted.

“I had a fight with the World’s Most Dangerous animal – a woman,” Haskell says.

“It must have been the wife of Tarzan,” Roberts says. “You seem to have
lost.”

“It certainly was not a draw,” Haskell says.

Roberts lets it go, and when Haskell stops for a meal and offers to buy one for Roberts as well,he figures the guy’s OK.

After they eat, Haskell asks Roberts to drive so he can sleep. That’s when the rain starts falling “like tears.”

Roberts pulls over to put the top up on the convertible, while trying to wake Haskell. He opens Haskell’s door, and Haskell falls out and cracks his head.

Roberts disposes of the body in ditch, but not before switching clothes with Haskell.

“This was a lot of jack, but believe me, this was not the kind of money I wanted to have,” Roberts says.
He goes through some papers and finds Haskell was “a chiseler.” He then takes off in the Lincoln.

Waiting at a gas station just down the road is Vera, the woman who had tussled with Haskell, looking for a new ride.

Roberts stops for her. They don’t say much.

“She was facing straight ahead, so I couldn’t see her eyes. She was young, not more than 24,” Roberts tells us. “Man, she looked as if she’d just been thrown off the crummiest freight train in the world. Yet in spite of this, I got an impression of beauty. It was not the beauty of a movie star or the beauty you dream of with your wife, but natural beauty that’s almost homely because it’s so real.”

Vera, we quickly learn, believes Roberts is a schemer like herself, especially since she knows he is not the real Charles Haskell because she had scratched him up. She decides to hold Roberts hostage with her knowledge that he must have done something to Haskell.

Once Roberts realizes the situation with her, he thinks, “Just my luck, picking her up on the road. That’s life. Whichever way you turn, fate sticks out a foot to trip you.”

Vera learns that Haskell is being sought because his wealthy father died. She wants Roberts to pose as Haskell and claim the inheritance,but he just wants to ditch Vera and go to Sue.

I won’t divulge any more than this.

Ulmer shot Detour in just 28 days. In 1992 it became the first B movie and the first Hollywood film noir to be chosen for inclusion in the Library of Congress National Film Registry of important American films.

Ironically, like Ulmer, actor Tom Neal was also blacklisted by Hollywood for his attentions to a woman. Neal – who had been a successful amateur boxer before turning to acting – was blacklisted for severely beating fellow actor Franchot Tone, who was engaged to an actress Neal was interested in.

With his movie career ended, Neal became a gardener and opened a landscaping business in Palm Springs, Calif. In April 1965, he shot his third wife, Gail Bennett, in the back of the head. He claimed it was an accident, and a jury apparently believed him because he was convicted of involuntary manslaughter and was sentenced to serve one to 15 years in prison, of which he did six.

He was released on parole in December 1971, and died of heart failure the following August at the age of 58.