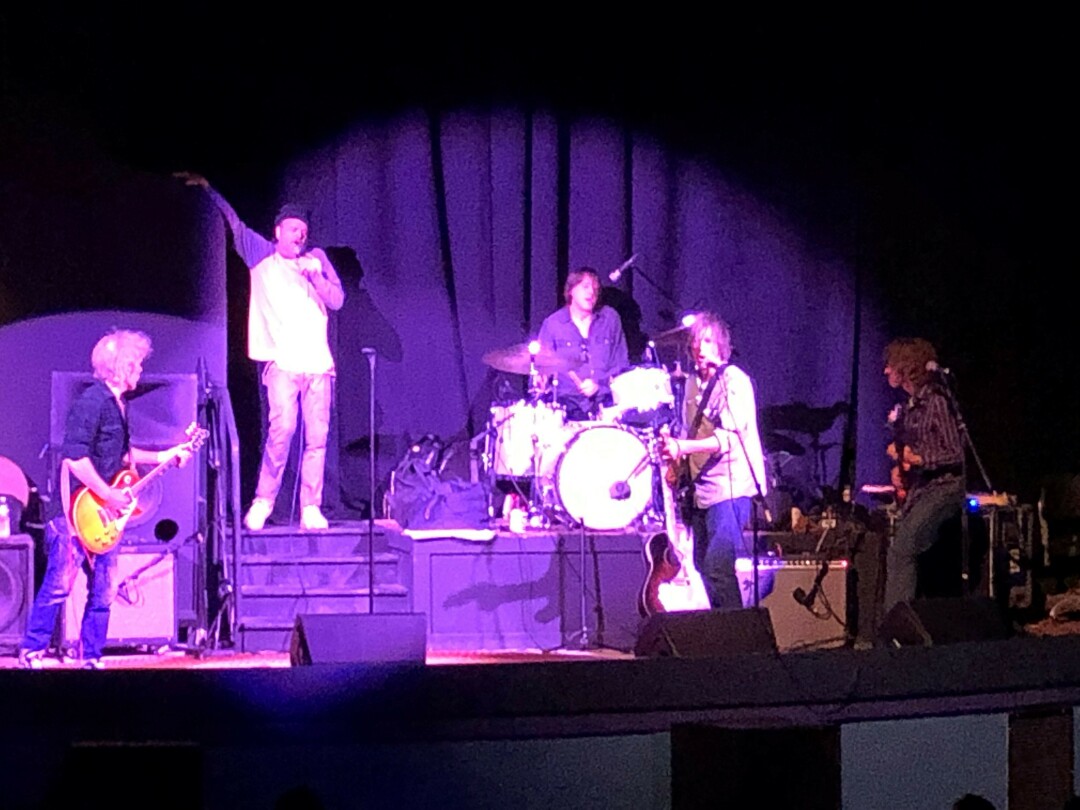 It was Thursday, Nov. 3, and the time was ripe for a breakout. The crowd at the West started out small but grew throughout the evening.
As The Scarlet Goodbye assembled, the hoots and hollers began. The Minneapolis-based band response was: “It’s special being back in Duluth, but in a weird way.”
What amalgam of rock-and-roll was this? Original tunes I’ve never heard before, punk, David Byrne-type commentary (“You lost your phone, I think you lost your mind…”), alt-country, rock, ballads (“The Ballad of Julianne”) and at least one cover (“Precious Love” by Bad Finger) were all served up.
Co-leaders Jeff Arundel and Dan Murphy have been in cahoots for a relatively short time, though each has been in the business for many years.
In addition to Arundel (acoustic and electric guitar, vocals) and Murphy (electric guitar, vocals), other band members were Pat Frederick (keyboards, violin), Ben Peterson (drums) and Soup Town native Pat Nelson standing in (bass).
I had heard this group last July at ReaderFest and thought they sounded pretty good from the Bayfront stage. So I headed to the West to see them again.
The Scarlet Goodbye’s set was pretty brief, but sufficient to see these guys were having a good time entertaining the rabblerousers who came to see headliner Run Westy Run.
At one point a couple of rude women sitting front left had to be shushed so the rest of us could enjoy this group’s music.
Toward the end of their set they performed the original, “Rosary,” written by Murphy, who had an interesting stage presence, with his microphone raised so high that he had to stretch himself to the utmost to reach it and be heard. As he moved back and forth from it, some of the lyrics were lost.
The wall-of-sound created by electric guitars and pounding bass were not easy to overcome in any case. (A more understandable rendition of this song can be heard on YouTube.) Despite this, Arundel claimed the West Theatre was conducive to their sound and they liked playing there.
Next up was Run Westy Run, another Minneapolis-based band that has been playing to devoted followers for nearly 40 years – or as posted on its Facebook page, “now in its 4th decade of blowing minds.” (Thirteen years ago a Facebook group was formed to “demand that the men of Westy dust off their beer-soaked amps, pick up their instruments and reunite; if only for one more gig.”) The band has a star on First Avenue’s Wall of Stars in Minneapolis; need I say more?

Part grunge, part funk, part indie-induced explorations of rock and roots, these guys really mix it up. The crazies who comprise RWR are Kraig Johnson (rhythm guitar, vocals), his brother Kirk (vocals, the craziest of all), Paul McFarland (bass), Peter Anderson (drums) and Terry Fisher (no relation! lead guitar). And when I say they are “crazy,” I mean it only in the best possible sense. They are out-of-the box, laws unto themselves, funny and fun.

The tunes performed included “All For You,” “Move,” “You Say This Is Love,” “Head Trash” giving Kirk ample opportunity to fully express his campy, kinetic and irrepressible energy. Crawling and rolling on the floor (shades of Prince!) and singing from the wings, Kirk mesmerized us with his on-stage antics.

The loud electric guitars and bass tended to drown out some of the lyrics, introductions and song titles (the above are my best guesses). What the music didn’t obliterate, the audience applause did.
The only thing missing was a mosh pit; only a few rowdies in the crowd got up and danced – including the two rude women who evidently are followers of RWR.
Toward the end of RWR’s performance, all the guys got into the act, with groovy moves revealing their family ties and camaraderie.
Then Rich Mattson (of Rich Mattson and the Northstars) was called up to join the band in a cover of “Love Train.”
It was an evening to remember. One wonders how long this legendary ensemble will continue to entertain its fans.
If a wild and wooly electric music mashup is your thing, the West is the place for you and the Westys your band.
Looking ahead to promising live music events scheduled for the weeks ahead, note that Owen and Jacob Mahon and Russ Sackett, some of our favorite local musicians, will open for Joseph Huber’s performance at Sacred Heart Music Center on Friday, Nov. 11 at 7:30 pm. Huber is known for his take on roots music and Charlie Parr-type persona.

A week later SHMC will host Nachito Herrera, a Cuban jazz pianist who will bring an entirely different sound to this venue that I am eager to hear.
One last note: Our heartfelt condolences go out to Alan Sparhawk and family on the death of Mimi Parker on Saturday, Nov. 5, as well as to the rest of the band Low and its multitude of fans. Her passing is beyond sad for us Duluthians who watched Low evolve during the past three decades.