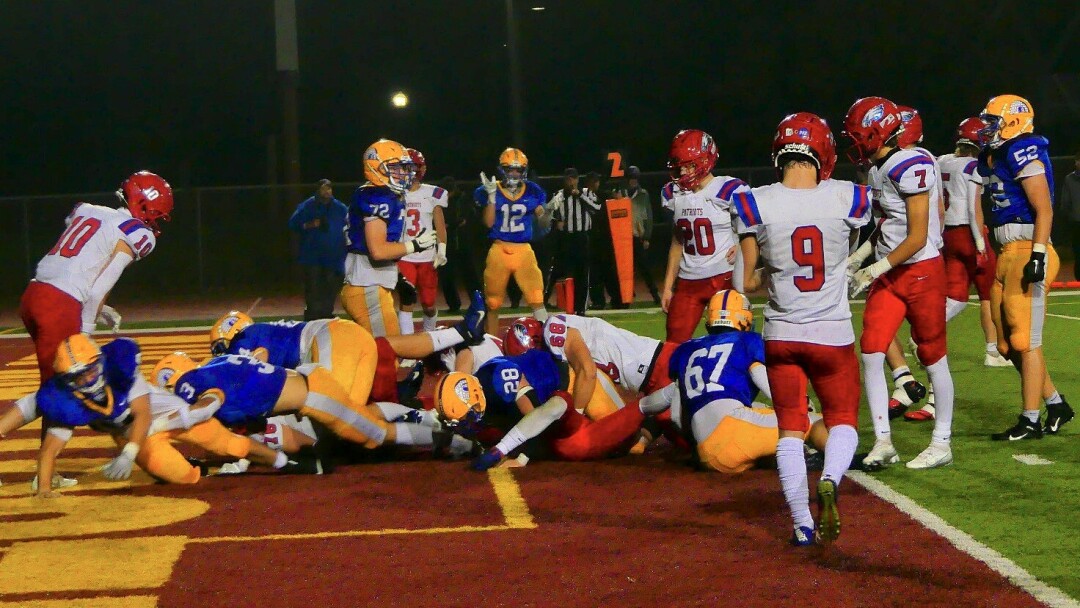 It took teamwork for Esko to overcome Pequot Lakes in the 7AAA final, as seen by the surge of blockers that carried Nolan Witt (28) into the end zone for a 7-6 lead. Photo by John Gilbert.

A typical sports week pays no attention to chronology. The schedule is made, the teams meet at the assigned time and place, and battle with varying degrees of skill and tenacity to determine winners.
My week started with an exhibition preseason basketball game between Division II UMD and Division III Wisconsin-Superior, then it branched out to Malosky Stadium, where Esko was battling for the right to go to the state Class AAA football tournament.
After a stop at Romano Gym to see if the highly ranked UMD team could sustain a high level in their next-to-last game of the NSIC season.
Affer that, it was a welcome plop into my favorite recliner to catch up on the sixth and deciding game of the World Series, then to watch teams like the Vikings, the Wild, and try to keep up with the UMD men’s and women’s hockey teams were capable of succeeding in their respective conference battles.

One of the undisputed highlights was Esko’s tense battle against Pequot Lakes in the 7AAA football final between two unbeaten teams. It couldn’t have been tighter or tougher for either team.
Pequot Lakes struck for an early touchdown in the first quarter, and Esko came back with a tough, determined drive with Nolan Witt covering the final yard and getting virtually the entire Eskomo team getting behind him – literally – to create a human avalanche that shoved  him  into the end zone for a 7-7 tie in the second quarter.

Pequot Lakes got a similar line-crushing TD to regain the lead, but the kick was wide and the lead was only 13-7.
Redemption time came before halftime for Esko’s Carter Zezulka, who, in short order missed an interception, couldn’t catch a possible touchdown pass and was called for a penalty.
But these Esko kids go both ways and they seem to trust each other. So quarterback Ty Christensen went right back to Zezulka in the end zone on the right sideline and he made a much more difficult catch for the 8-yard tying touchdown pass.
Wyatt Hudspith calmly kicked another extra point and Esko led 14-13.
Once again, though, Pequot Lakes came up with some big plays, and Grant Loge knifed into the end zone from the 1 to gain a 19-14 lead. The Eskomos stopped the 2-point try, but the unbeaten Esko team and its hardy fans were already in their toughest fourth quarter of their toughest game of the season.

Christensen ran and directed Esko into Pequot Lakes territory, and just when the drive appeared to stall, Christensen pitched the ball to Javontae Gregory coming hard in motion from right to left, then he ran ahead to throw a block for him.
Gregory turned the corner and headed up the left sideline, with nobody who could tackle him still standing upright.
The touchdown set off a wild celebration on the Esko sideline and in the stands.
Time was running out, and Esko had wrested a 20-19 lead that Hudspith swelled to 21-19. But there was still time.
That time took a sudden detour, however, when Witt jolted Pequot Lakes quarterback Loge with a jarring hit that popped the ball loose.
Joey Antonetti of Esko picked up the loose ball and dashed 26 yards for a touchdown, clinching the victory at 28-19 and sending Esko back to the state tournament, where Esko (11-0) faces Dilworth-Glyndon-Felton (10-0) at 1 pm Saturday in Brainerd.
A couple nights earlier, UMD unveiled its basketball team in a nice, neighborly exhibition game against Wisconsin-Superior.
The Yewllowjackets may have been intimidated at the start, and if they weren’t, the Bulldogs Drew Blair made it no-contest after about eight minutes.  Blair simply kept shooting his sweet, swishing long jump shots.
He made his first five tries, and four of them were from 3-point distance. The Bulldogs kept scoring while UWS kept missing, and when it was 56-20 at halftime, Blair had scored 27 points, with 9 of 10 field goals, 7 of 8 of them on 3s. He played a total of 24 minutes to rack up his 27 points.
To its credit, UWS played much better in the second half; too bad they were mathematically eliminated halfway through the 102-64 romp.
In volleyball, UMD senior Sydney Lanoue doesn’t always lead in kills, but she always leads, on and off the court.
The Bulldogs power game wasn’t dismissing Mary in Friday night’s confrontation, while off-balance with an array of soft shots to open floor. UMD won 25-15, 25-15, 20-25, 25-19, but UMD coach Jim Boos was extremely agitated on the bench as he said later his players were too complacent.
“We got 61 kills to their 33, and we were still in a tough battle,” Boos said. “How can that be?”
The error-prone Bulldogs stayed in control until the third set, but responded in the fourth, mainly because when Mary charged to close the deficit to 21-18, Lanoue blasted three of her team-leading 19 kills to put it away.
The 19 kills were the most in Lanoue’s career, and proved her importance to settle things down, and occasionally win a match singlehandedly.  night later, UMD swept three straight sets from Minot to finish 25-3, as Lanoue led the team with 13 kills in to give the Bulldogs plenty of momentum to take into the NSIC playoffs.

UMD’s hockey teams had a near-disastrous weekend on the road, with the men being strangely uncompetitive in being embarrassed 5-0 Friday at Colorado College – falling behind 4-0 in the first period! – and then having to spend it all on defense the next night to battle to  1-1 standoff that saw them respond to a 1-0 first-period deficit for a tying goal by Ben Steeves – a freshman who still might be UMD’s best sniper – and a goal by Owen Gallatin broke the tie with 1:41 left in the third. Blake Biondi shot the puck the length of the ice into an empty net to secure a 3-1 victory for the split of their NCHC opener.

Meanwhile, at Ridder Arena in Minneapolis, UMD fell behind 2-0 in the first period but tied it on goals by Gabby Krause in the second and Nina Jobst-Smith in the third, but Taylor Heise won it for the Gophers at 0:16 of overtime.
The next night, UMD spotted the Gophers two goals, got one back from Maggie Flaherty, then gave up three more in the second to trail 5-1 before Mannon McMahon and Clara Van Wieren scored too little, too late in a 5-3 loss.
The outcome means UMD tumbled out of contention by going 1-5 in their six straight games against Minnesota, Wisconsin and Ohio State, and now they stop at St. Cloud State this weekend.
The UMD men come home to take on Nebraska Omaha at AMSOIL Arena Friday and Saturday.
Amid all that, we saw a very entertaining World Series come to a conclusion with the Houston Astros beating the Philadelphia Phillies in six games, led by rookie shortstop Jeremy Pena, who was brilliant in the field, and got 10 hits in the six games, driving in three and scoring five as the No. 2 hitter in the Astros lineup.

Houston had a phenomenal pitching staff, but the Phillies pretty well matched them in both starters and relievers, right up until the final game.
Then there were the Vikings, who have astounded the entire NFL by stretching their season record to 7-1, winning when they should and also winning when they have no business recovering from games where they’ve been outplayed.
Outstanding defense, and the remarkably adept play of quarterback Kirk Cousins have combined to put the Vikings out of reach above the rest of the NFC’s Central Division, as Green Bay, Chicago and Detroit are all languishing at the bottom.
Still, every weekend is another test and this weekend the Vikings go to Buffalo to face a Bills team that is loaded, but struggling. Should be a major attraction.
Big as some of those games have been, however, we need to realize that the premier sports attraction in the Twin Ports might well be Esko’s superbly coached and balanced Eskomos, who head into the Class AAA state football tournament at 11-0.