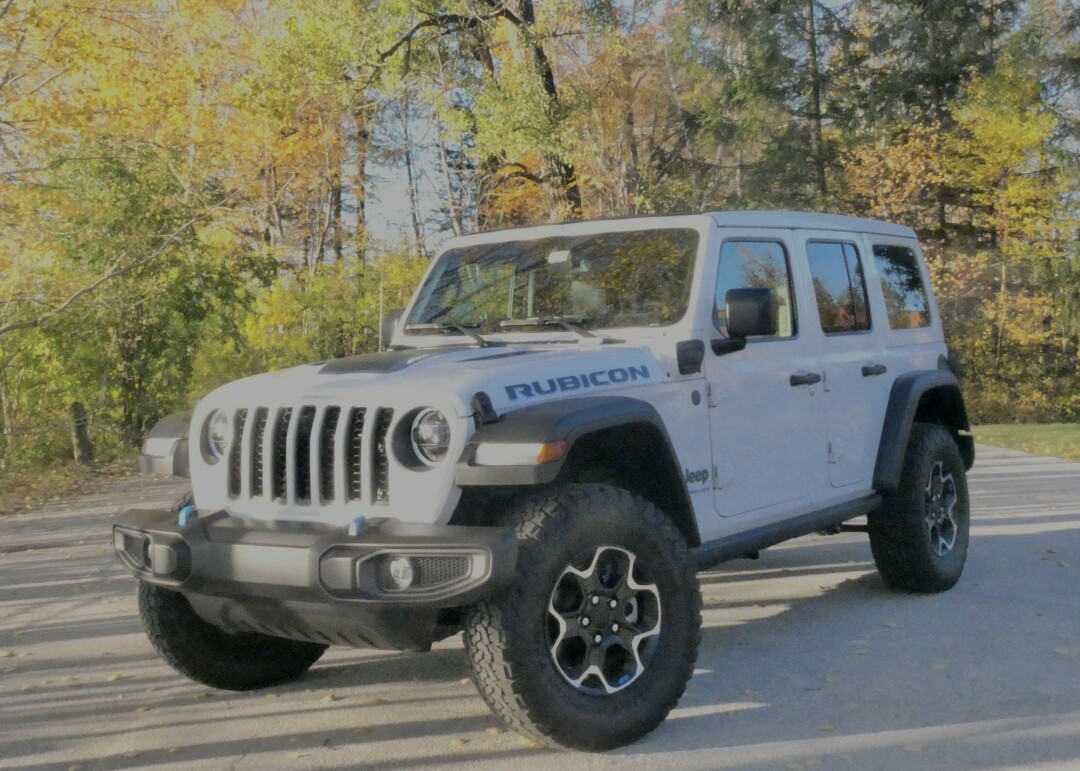 When hybrid vehicles first came out, there was a reluctance by the public to accept – much less seek – them.
But now that we’re heading toward all-electric vehicles, there seems to be a lot more acceptance of hybrids as a stepping stone.
Chrysler, or Fiat, or Stellanis has obviously noticed all this, and for 2023 it is offering a Jeep Wrangler Rubicon 4Xe, which is a plug-in hybrid version of its most rugged all-terrain vehicle.
The Wrangler has become iconic among off-road lovers, and in recent years, steps to make it better performing and more useful on-road has enhanced the Wrangler’s popularity.
While most companies are taking street vehicles and trying to make them more rugged, Jeep is taking its most-rugged vehicle and making it much improved for everyday use.
One of my favorite engines in recent years is the Chrysler-designed dual-overhead-camshaft 2.0-liter 4-cylinder. It was built specifically as a high-output performer and, in fact, in turbocharged form, it is the base engine in the near-exotic Alfa Romeo Giulia sports sedan, one of the best-handling and performing cars on the market.

You can get an extremely high-tech V6 built by Ferrari Formula 1 engineers in the Giulia, but if you don’t have great wealth, the 4-cylinder is the way to go.
Parent Fiat, and now Stellanis, builds the base, entry-level Jeep Renegade in Italy, and it uses the same 2.0 high-performing 4-cylinder.
Meanwhile, the new Jeep installs the 2.0 Turbo engine in the Wrangler Rubicon 4Xe, coupled with the battery pack in a sophisticated engine/battery/transmission combination. It produces 375 horsepower and 470 foot-pounds of torque.
The 8-speed automatic transmission regulates it all, but the whole system makes this the most powerful Wrangler ever, and off-roaders might already be salivating at the thought of going up some of those vertical rock walls in places like Moab, Utah, with this.
When you show up late to the hybrid party, you’d best be offering something special, and the Wrangler 4Xe certainly does.
With most hybrids, if you drive hard you run on a combination of gas-engine and electric motor power, or you can run as far as possible on pure electric, knowing the gas engine will kick in when you deplete the electric power.
The gas engine operation can supply regenerative power to the battery pack to extend its electric range.
In the 4Xe, you can use a knob to select which mode you want to run in – Hybrid, Electric, or E-Save.
In Hybrid mode, you run on electric mainly until it is depleted, when the gas-engine power takes over; in Electric, you run on electric power only and the gas engine doesn’t help; in E-Save, you ruin on the gas engine only, which allows you to save the electric power for a time when you might be able to run exclusively electric for a longer period of time.

Interesting selectivity. The E-Hybrid mode also can be adjusted to fit your driving habits, calculating the amount of driving over the past two weeks you have done of all-electric.
It also will schedule you for regular times to plug in the plug-in system for recharging at a time of off-peak electrical usage.
You can, of course, over-ride the charging schedule by pushing a button that says “charge now,” and then plug it in immediately.
Other than the high-tech propulsion system, the basic Wrangler Rubicon is what you get, with heavy-duty and adjustable suspension pieces, plus rock protection and disconnecting stabilizer bars.
The test vehicle was stickered at $69,385, with pop-out rear quarter windows and a one-touch power fabric roof that fits winter-tight when you don’t want to welcome Mother Nature to ride along.
It has all the contemporary safety and connectivity stuff, and every time you take it for a ride you realize that it is farther and farther away from the good ol’ days of Wrangler driving, where a run to a shopping center is a lot like trying to go 60 miles per hour on a pogo stick.
I was not always in position to play around with the various rechargeable plug-in system, so I trusted the regenerative capabilities, but I averaged only about 20 miles per gallon, with a highest reading of 25 mpg. The EPA estimates show 20 mpg gas-only and 68 mpg using mostly electric only, for an average of 49 mpg.

I liked the large, bold numbers of 49, which didn’t mentally prepare me for real-world 18-20. But hey, it’s a bold step in the right direction for merging the age-old hobby of off-road driving with the contemporary use of new and creative drivetrains.