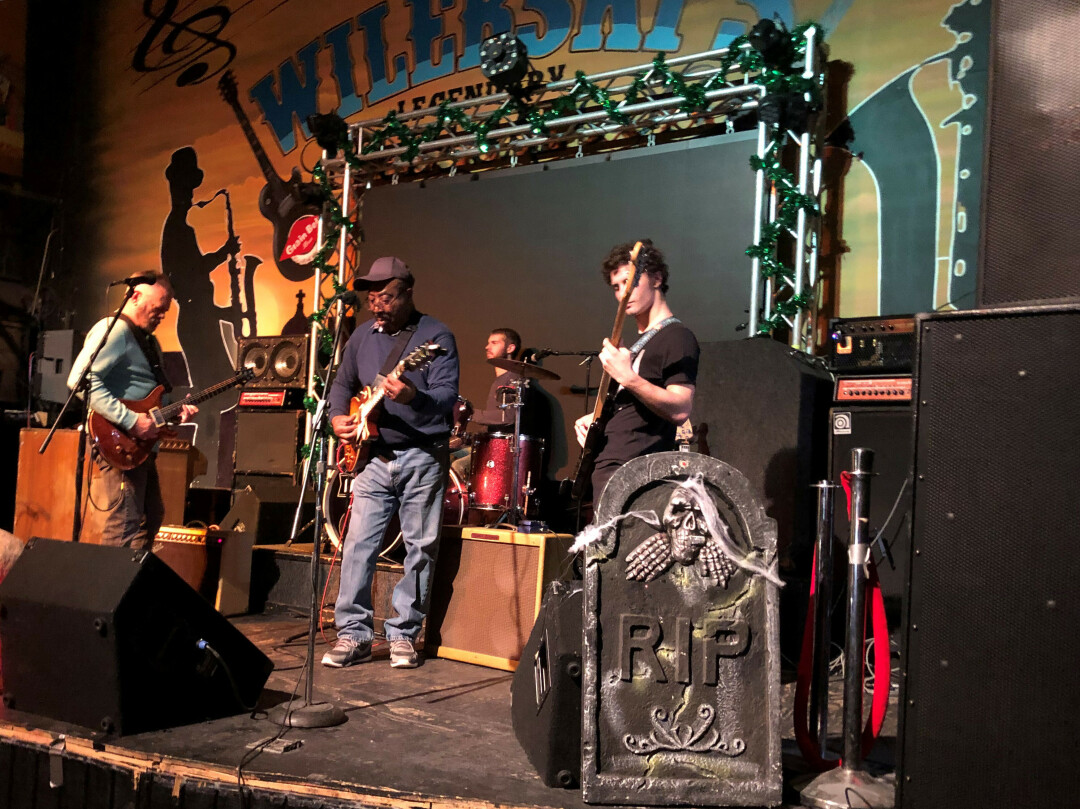 It was one of those “Big O” birthdays that is cause for a special celebration, so that’s what brought me to the Blues Saloon (formerly Wilebski’s Blues Saloon) in St. Paul on Tuesday, October 25. The saloon features a regular Blues Jam and Dance every Tuesday. I became aware of this venue several months ago when researching the band Jimmys online, which was scheduled to play there. Though I missed that show, I checked the place out last June and found it to be right up my alley. So it was worth a second visit this October.

The jam is open to all, the setup simple and very organized. Allen Kirk, who responds to several monikers—Al, Al “Captain” Kirk, Captain and Cap-man-do—is the head man. He leads the regular backup band that provides order and continuity amidst the kaleidoscope of musicians that share the stage.

At the beginning of the first set, the Rules of the Jam are announced:

1-Guitarists must have their guitars tuned and out of the case before coming on stage,

2-Only come on stage when called up,

3-Drummers bring and use your own sticks and

4-Put your name on the list (a white board near the stage on the dance floor). A further admonishment was “If your name’s not on the list, you don’t exist!”

Depending on the number of musicians that sign up, each one may get to play a second, a third or more times as they rotate through the list. The participating musicians played a range of instruments—organ, drums, electric guitars and bass, trumpet, saxophone, and flute—as well as providing excellent vocals. No banjo was in evidence!

The drill is, when the musician is called on stage, Al asks him, “what Cha got?” Standard blues covers are generally the go-to, though rock and roll and related genres are okay, too. With newbies too nervous to sing, Al’s band takes the lead. At times the regular band members relinquished their places to those in line—drummers and bass guitarists mainly. The horns, saxophones and keyboards are add-ons. And the sounds were good! Several of the joining musicians were quite remarkable, in particular a blues harpist who really brought home the goods and a long-haired blonde who was a confident and enigmatic showman. 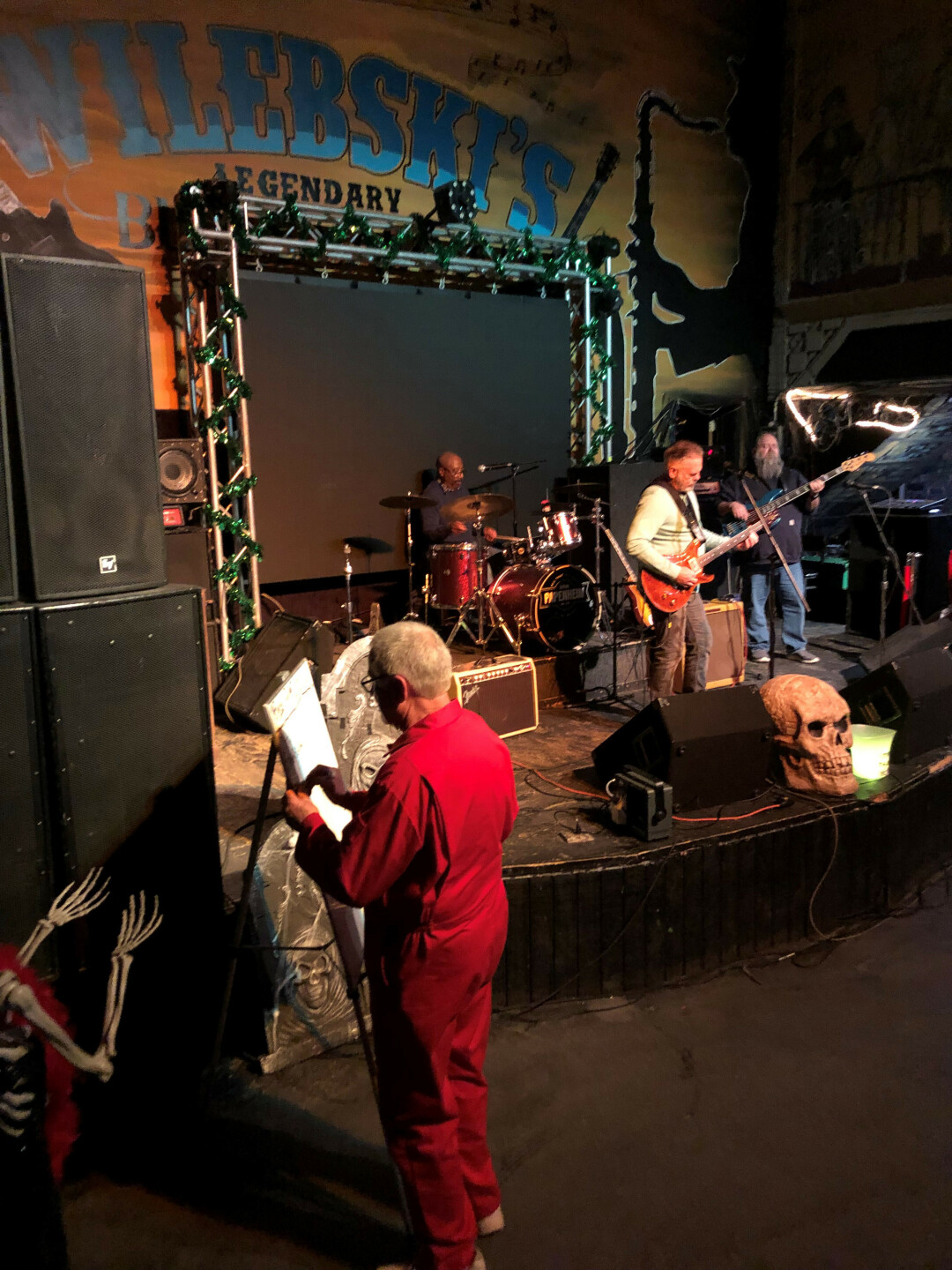 A trumpet player signs up to join the band.

The spacious dance floor quickly filled up once the musicians got underway and then it was non-stop dancing. The dancers were a diverse crowd, many were exceptional and fun to watch. From blues to several rock-and-roll numbers, and a bit of reggae, the music got people moving. Everyone seemed to know the lyrics to each number, singing or mouthing them as they danced. Some tunes I recall hearing were “Thrill Is Gone,” “Feeling Alright” and “Hey Bartender” not to mention a bonafide rendition of Dylan’s “All Along The Watch Tower.”

During a break I got a chance to talk with the “Captain” who told me he is originally from the west side of Chicago. When I asked how he came to live and play here in the Twin Cities he revealed it was a lady he met when the band he was touring with was playing in Minneapolis. And so he has been performing in these parts with the band, Magic Slim and the Teardrops, and others for about 14 years, along with running the Blues Saloon’s jam and another in Northeast Minneapolis. He’s a Grammy nominee and was inducted into the Minnesota Blues Hall of Fame in 2021.

Al encourages participating musicians to talk with each other and form impromptu bands for this gig. Most of all he wants to keep it fun and simple enough so aspiring musicians will give it a whirl. “The band will have their back, make ‘em look and sound good,” he promised with a laugh.

I couldn’t help but wonder whether any of our Northland musicians might want to venture down there to join the jam sometime—just for a change of venue. Or maybe one of the music venues here in Duluth might try a similar setup. If you are in the Twin Cities and in need of a good ol’ blues evening, check this place out.

As I look ahead to all the music on offer in the weeks ahead, I appreciate the wonderful variety available. One coming up soon is the Concert of Remembrance on Sunday, Nov. 6, 3 pm at Sacred Heart Music Center. This is a chance for folks to hear what the acoustics of this place are good for. The powerful sounds of the Felgemaker Organ, looked after by the Friends of the Felgemaker, are something to be experienced. And one could say this concert expresses a different sort of blues. 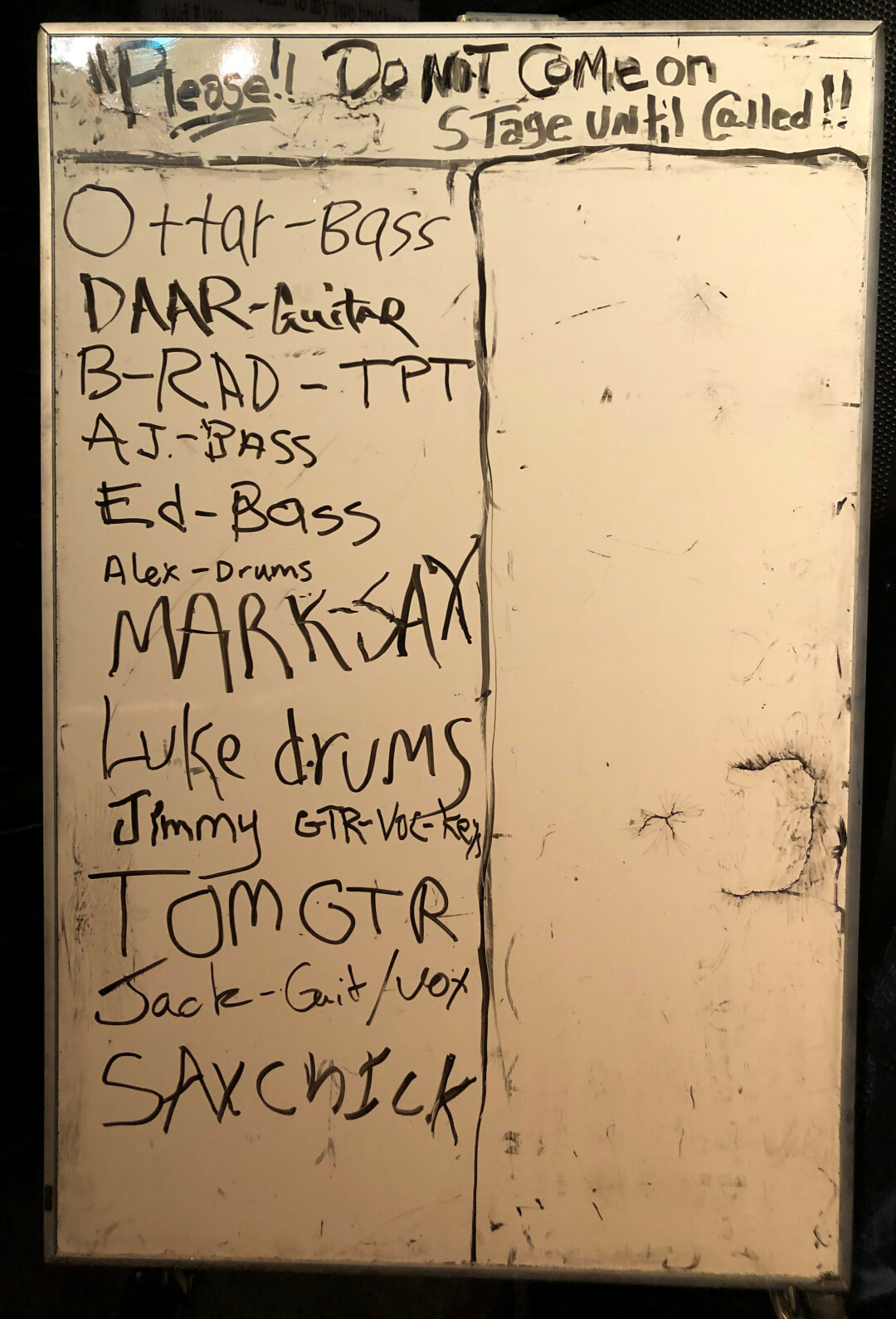