The shock of hearing that Tom Hoover had died hadn’t subsided, but I knew I had to attend the service honoring his impact on the sport of drag racing. Especially when I heard that his wife, Betten, had arranged to have the Friday morning service at Elsie’s, a Northeast Minneapolis joint, located not far from Hoover Wheel Alignment, on Lowry. It’s a combined bowling alley, restaurant, lounge and meeting place, and it always had been Tom’s favorite hang-out.

I walked into our walk-in closet and went directly to the four stacks of folded T-shirts at the far end. There might be hundreds of T-shirts there, folded neatly by my wife, Joan, and I wasn’t sure if I’d have any luck in my search. But there it was, standing out in white, at the bottom of the right-most pile. I pulled it out, and, sure enough, it was the souvenir shirt of Tom Hoover’s “Showtime” Funny Car, which he had driven to fame worldwide in big-time national drag racing events, as well as in special appearances overseas, ranging from England to Australia.

I had to wear it because the service obviously wasn’t going to be overly formal, being at Elsie’s.
Hoover, 81, started drag racing on the streets near his Osseo High School in the late 1950s, and when he found you could do it for fun and professionally, he started paying to enter Minnesota Dragways and Twin City Speedway for weekend match-races. He quickly worked his way up to the menacing Top Fuel Dragsters, the pinnacle of the sport, by the mid-1960s, and his dad, George Hoover, was his crew chief.

When I was just starting a 31-year run at the Minneapolis Tribune, i would stop by the alignment shop to talk to Tom, George and the crew members, learning the intricacies of the sport of muscling those 1,000-horsepower monsters down the quarter-mile strips of the country.
Tom decided to switch to the newer category of Funny Cars, which are shortened Fuelers with a flip-up body resembling actual street vehicles, and they became wildly popular.
In those days, the various tracks were not maintained in the sanitary manner they are these days, so drivers pulled up to the starting line and, before staging, blipped the throttle for an ear-splitting instant, spinning the giant rear slicks hard enough to get all the little gravel particles blown off for a smooth start.

Hoover went over the edge, figuratively, and while big-time stars like Don (the Snake) Prudhomme, Raymond (Blue Max) Beadle, and later superstars like John Force, might do those “burnouts” for 20 feet or so, until Hoover showed them the way.
Hoover would spin his rear wheels violently, to send up billowing clouds of tire smoke, then he would hold his burnout as he and his car disappeared in the cloud as it lurched for fully half the quarter-mile track. The large and growing crowds at places like Donnybrooke (later BIR) and other major tracks roared their approval. 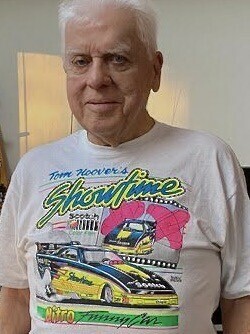 That made it not only fitting but logical that Tom Hoover’s Funny Car was named “Showtime” and earned him invitations all over the country, and the world.
Nowadays, everybody competes to do the longest burnout, but Tom Hoover was the best at adding showmanship to the otherwise fierce competition.
Betten introduced me to Tom’s adult Hoover kids, and some of the grandchildren. She explained to me that Tom had suffered some major health issues, including a stroke that limited his willingness to go anywhere in public. Then he fell. Then he suffered a second stroke, and told his family that he wanted to stay right there, in St. Joseph’s Hospital, where he was getting VIP treatment.

Two weeks later, on Oct. 21, he died. “People always say that they wish they could get just one more day with their spouse,” Betten said. “I feel blessed that I got two more weeks.”
I wish I could have stayed through the afternoon ceremonies the family had planned, but I had to zip back home to Duluth to get to the UMD women’s 2-1 overtime victory against previously unbeaten Wisconsin in the afternoon, and then the men’s 3-2 victory against Cornell at night, leading up to an exhausting Saturday, when the UMD football team crushed Minot State 51-7 at high noon, then the Bulldogs women absorbed a distasteful 4-3 loss to Wisconsin, when the apparent tying goal was disallowed by a Wisconsin challenge that led to a review proving UMD’s Mannon McMahon had been offside about 30 seconds earlier to nullify the goal.

UMD finished the weekend with a 4-2 victory for a sweep against Cornell.
In the football game on Senior Day, many of the 16 seniors being honored contributed greatly to a game that was a 30-0 blowout by halftime.
But a couple of freshmen also played huge roles.
Quarterback Kyle Walljasper expanded his resume from being “just” a runner by connecting on 11 of 15 passes for 176 yards and three touchdowns, but the biggest surprise was a secret weapon coach Curt Wiese pulled out of his bag of tricks. Cameron Miller, a former high school star at Prior Lake, was doing just fine as a tight end and fill-in linebacker, but Wiese turned him loose at fullback.

Miller, at 6-foot-2, 220 pounds, carried the ball 17 times for a team leading 117 yards and a touchdown.
“That was fun,” he said afterward. “That’s the most I’ve carried the ball since high school. I’m a tight end and linebacker usually.”
Seniors Zach Ojile and Armani Carmickle scored two touchdowns each, and Ojile added two 2-point conversions, and Wade Sullivan, a senior workhorse in the backfield, carried 12 times for 91 yards before getting a break from his normal workload in the second half.
At 30-0-, Walljasper left no doubt about the outcome, connecting with Carmickle for a 75-yard touchdown play on the first play of the second half.