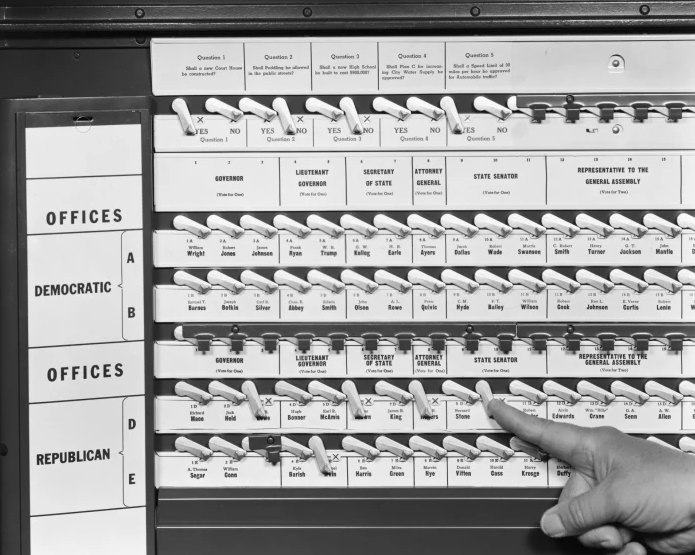 Last week I noted that in 1860 even in the Southern states, where Abe Lincoln was kept off the presidential ballot, no one cried “fraud.” No one disputed the election. Angry states simply seceded.
The voting machine was invented in 1881, the same time as states began adopting the secret ballot.
By the time I cast my first ballot in 1972, drawing a curtain around myself like the Wizard of Oz with the pull of a lever, the huge clunky machines were old hat. I’m sure my wife brought our kids in with her behind the curtain to teach them their civic duty by her good example.
Eventually the monster machines gave way to smaller electronic devices that could tally hand filled-out paper ballots. If there were doubts ballots could be counted by hand. Even so, a hand count could be laborious and controversial.
The razor-thin 2000 vote in Florida was short circuited by a Supreme Court majority which briefly took back its insistence on state election supremacy. This handed Republican candidate George W Bush the presidency and trashed a hand count that would have given the state’s electors to Democrat Al Gore.

Gore graciously followed Republican Richard Nixon’s 1960 example and conceded the election.
In 1960 pre-South Republicans thought the thin democratic victories in Illinois and Texas had a funny smell. Southern Democrats were the most proficient election riggers in America.
For a century after the passage of the 15th Amendment Southern Democrats insured that few if any slave descendants were allowed to vote. All those uncast votes were reliably Republican.
I was 14 before that changed with the passage of the Voting Rights Act. Surprise, surprise! Not long afterwards southern Dems switched partners and gradually the Party of Lincoln was itching to gut the Voting Rights Act. Then it came to pass with a Republicanized Supreme Court.
This didn’t prevent Joe Biden from getting elected so someone’s partisans attempted Jan 6, 2021, overthrow.
Now Republicans are demanding a return to paper ballots. Internet rumors tell us that remote malefactors are changing votes inside voting machines. Gun-toting Republicans are confident they can mosey over to voters, drop boxes and ballot counters all will be well so long as votes are cast on paper.
Never mind that Florida’s infamous hanging chads were all on paper ballots.
In the early 2000s I wanted to prove to fetus-loving Republicans that I, too, remembered Democratic shenanigans. I was going to write a tell-all about the 1978 election when scandals helped Republicans rout the DFL in the “Minnesota Massacre.”
Despite a couple years’ research I was never up to explaining such a convoluted tale but that search led me to I an even earlier episode of DFL chicanery from 1962. That was the year before I moved to Minnesota.
Senator Hubert H. Humphrey, a DFL hero, cooked up a fake highway contracting scandal that cost squeaky clean Republican Governor Elmer Andersen dearly while he was running for reelection.
Even so, a first recount declared Andersen the winner by a threadbare 142-vote margin. More recounts ensued. The 500,000 machine-cast ballots were never questioned but the 800,000 paper ballots were. They got counted over and over. By January 97,000 votes were challenged, a huge number. This was whittled down to 3,851 suspect ballots. In them lay victory or defeat.

In my book research phase I inter-viewed a one-time DFL contender for Governor. He told me what one of the DFL attorneys participating in the 1963 recount told him. The attorney palmed a pencil as he thumbed through ballots. He surreptitiously marked irksome ballots in such a way that a later vote counter might consider them spoiled in further recounts.

On March 25, 139 days after the November election, Democrat Karl Rolvaag was sworn in as Governor, having won by 91 votes. That was just a hair more than one vote per Minnesota’s 87 counties.
I moved to Duluth in 1974, intent on becoming a missionary for good government Republicanism. My antennae were up. My college Republican friends had joked about the communist gun range in Cherry, Minnesota. The Iron Range is where many a Republican campaign went to die.
In only slightly less Democratic Duluth, as everywhere else, Minne-sota law required that both major parties have equal numbers of elec-tion judges and poll watchers during elections. The problem was that there were hardly any Republicans in a lot of precincts.
You really couldn’t hold up an election because one party was unable to field election monitors, so a blind eye was turned and many Democrats become honorary elephants on election day. These were honest people a little embarrassed by their white lies, but Democrats won such lopsided victories there was no cause for mischief.

But today with partisanship taking on cult-like power I can’t help but think of that pencil-palming lawyer when I watch Trump’s attorneys make their cases for a President who refused to say he’d abide by the election results.
Harry Welty also  shoots off his mouth at lincolndemocrat.com.