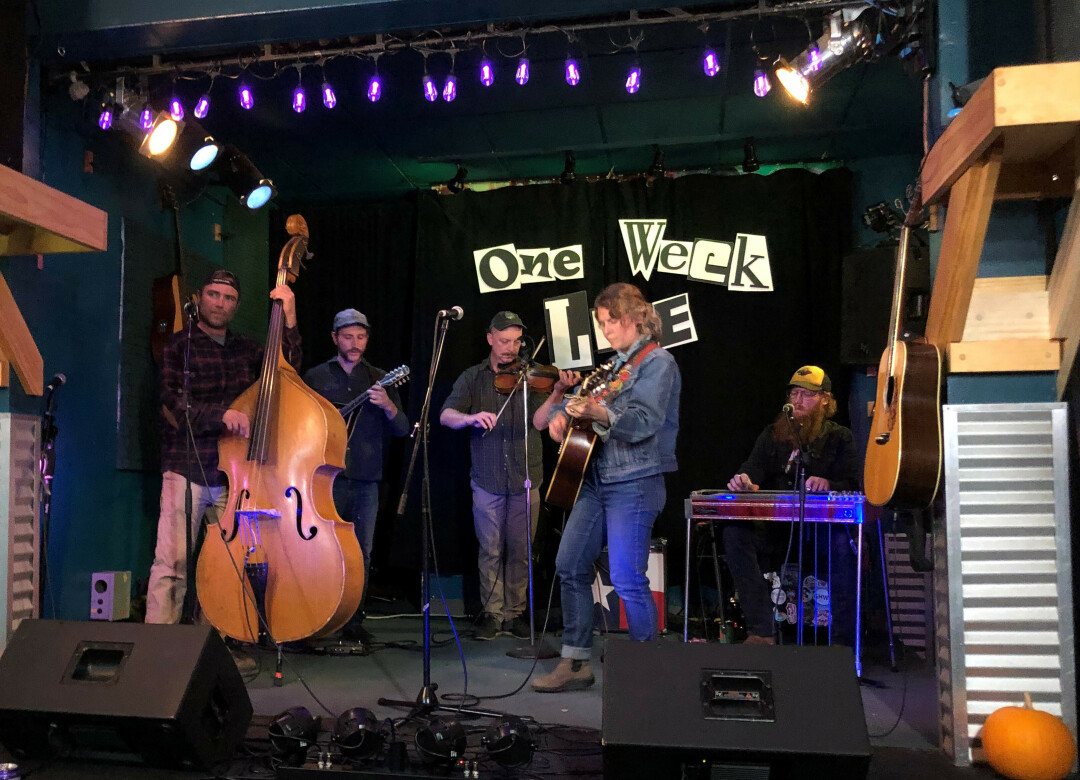 It has been months since I started looking for the band Feeding Leroy after hearing how good the group is from numerous folks.
Since I’ve been back in Duluth a little more than two years, I’ve had a lot of catching up to do. Between scarce Feeding Leroy gigs and schedule conflicts I kept missing my chances, although, I have seen Lee Martin, who leads the group with wife Sonja Bjordal, playing with others on several occasions.

One was at Wasko’s in Lake Nebagamon, Wis., which I wrote about a several weeks ago, where he and Jim Hall and others regularly jam.
More recently, Lee played with others at the Breeze Inn’s OctoberFest on Saturday, Oct. 8.
But the first time I actually heard him, was on July 7 at Cedar Lounge, when he sat in with Boxcar, playing the pedal steel guitar. I didn’t have a clue who he was then.
So when I saw that Feeding Leroy was one of the acts kicking off Wussow’s 20th Anniversary of One Week Live on Monday, Oct. 17, I made sure to be there.
Although I had to sit (impatiently) through sets by Steve Solkela and his “Overpopulated” One-Man Band and The Driftless Revelers, it was well worth the wait.
Feeding Leroy took the stage about 10:15 pm, with three out of four members of the group – Sonja (acoustic guitar and vocals), Lee (acoustic and pedal steel guitars and vocals) and Adam Staupe (standup bass and vocals).
Luke Martin (harmonica), Lee’s brother, was absent this evening, but sitting in with them were Nate Hynum (mandolin) and John Lane (fiddle) who proved to be excellent additions.
The quintet, led by Sonja, began with a cover of Island Jewel’s “Hiding In The Sand” that recalled the time she and Lee spent in Texas this past winter. Next was an original she wrote, “Last Goodbye,” which demonstrated her pure vocal power.
Lee’s vocals are powerful as well, leading his own compositions, “Comes A Time” and “The Tennessee Devil.” Lee really gave full voice on another original, “I’m Leavin’.” And finally there was “Simple Song To Sing” which started out as a ballad then quickly transitioned to pure bluegrass, allowing John Lane to strut his stuff on the fiddle.

To continue my exploration of Feeding Leroy’s music, I purchased its 2015 CD Love Is A Gamble, featuring five original songs by Lee and two by Sonja. All were solid country tunes that replicated the fine harmonies I heard on Monday. These selections were very memorable and worthy of repeated listenings. Both the title track by Lee and “Better Shore” by Sonja were favorites.

I guess I’ll need to pick up more of their CDs so I can enjoy more of their music.
But just to step back to that cool OctoberFest evening under the tent at Breeze Inn: I heard Lee with several other guys he’s played with for years. I must say I enjoyed the more rockin’ sound of that no name, “pick-up band.”
Feeding Leroy member Adam Staube was also there, together with guitarist Steve Carlson and drummer Mike Miller. It is an example of how the shuffling of musicians from group to group allows them to explore a variety of musical genres for the benefit of us all.