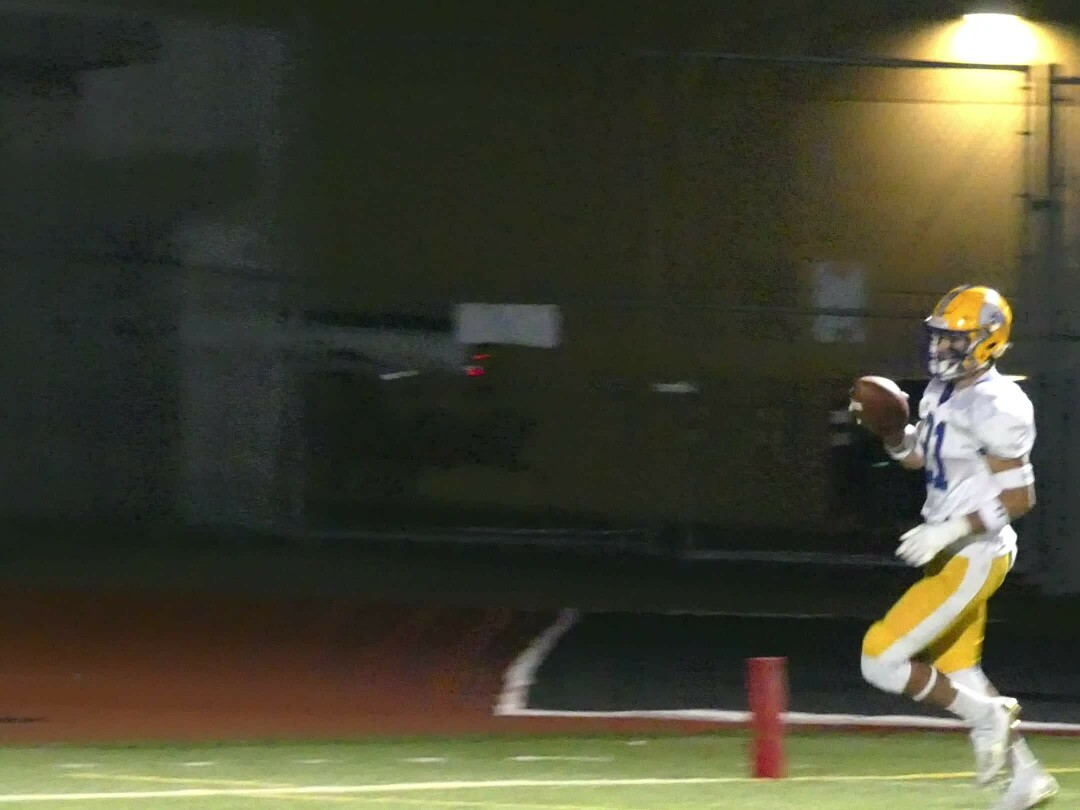 Esko junior Koi Perich reached the end zone after a 41-yard touchdown run – his third TD in the first half of the Eskomos 54-0 rout of Duluth East. Photo by John Gilbert.

If you’re a UMD hockey fan, for either the men or women, last weekend was a good weekend to be watching the Esko High School football team.
The Eskomos, whose enrollment would make a pretty good class size at Duluth East, ended the regular season by throttling the Greyhounds 54-0 at East’s Ordean Stadium. You could find heroes all over the turf, but they were all wearing Esko’s blue and gold. Primarily, junior running back Makoi Perich lived up to his billing by scoring three touchdowns in the first half, when Esko built a 34-0 lead.

Or Nolan Witt, a powerful line-busting force, scored a spectacular 35-yard touchdown in the second quarter when he appeared trapped at the line of scrimmage, then simply powered his way through and away, up the middle.
Witt came right back and intercepted a pass and returned it to the 2 to set up another TD.
It might have been an offensive shootout, but East senior Austan Orvedahl remained out of commission with an injury suffered two weeks ago, and the Greyhounds were unable to generate anything resembling their usual offense.
Meanwhile, Koi Perich, who has been offered a Division 1 scholarship by the Gophers, was simply unstoppable.
Coming off a four-touchdown performance, he sped 34 yards for his first TD, then caught a pass from Ty Christensen and sprinted for another 34-yard touchdown.
In the second quarter, Perich broke free for a 41-yard touchdown run.
The Eskomos take their 8-0 regular-season record up against Hibbing in Section 7AAA this week. They could bring back a state championship, which is a long way off, but not as far as for most of Esko’s competitors.
On the college front, it was a shocking weekend for the UMD men’s hockey team, which lost 5-2 and 3-0 to a Wisconsin team that played far better than the 0-6 record next to the Badgers name coming in to Amsoil Arena.
The 5-2 loss featured two power-play goals by the Bulldogs, which some saw as a bonus, but it also meant UMD’s young but promising offense failed to score a single goal all weekend.
Inconsistent defense and a failure to make anything resembling a promising offensive attack was a slap upside the head to the Bulldogs, and to their loyal fans who have such high expectations.
The UMD women’s team went to Columbus, Ohio, and lost twice by 3-2 to the No. 1 ranked Buckeyes – the same score by which OSU beat the Bulldogs in last spring’s NCAA tournament final.
Both teams return from the road for doubleheaders at Amsoil Arena this weekend, with the women facing another stiff challenge from Wisconsin, followed by the men taking on Cornell, a rising power from the ECAC.
The UMD football team also was in for a shock at Bemidji, where the Beavers settled their battle for first place in the NSIC North Division with a 41-16 romp.
Their third loss of the season pretty well nullifies any chance for UMD to advance to post-season play, but of more pressing concern right now is to get enough players back to good health to get back in the lineup. Four linebackers were all missing with injuries at Bemidji.
The Bulldogs face Minot State at noon Saturday in their final home game of the season.
All was not lost in Bemidji last Saturday, however. The UMD volleyball team, which got its offense rolling with a 3-0 sweep against Minnesota-Crookston last week (25-12, 25-15, 25-11), swept at Bemidji State as well.
Also, the UMD women’s soccer team posted a stirring 1-0 victory against Northern State of Aberdeen to solidify a spot in the NSIC playoffs. The victory was UMD’s fourth straight, vaulting the Bulldogs from a shaky hope to make the final eighth spot to a much more solid sixth place.
The game against Northern, which stresses tightly disciplined defense, was a 0-0 standoff until Anna Tobias worked her way clear on the left side and saw an opening on the short side. She cut loose with a bullet that found the net with 15:19 remaining, and Jennifer Norris in goal made it stand up against the final pressure applied by the Wolves.

“I saw the opening in the top left corner so I shot,” said Tobias after her fifth goal of the season. “There was enough room, and I hit it well. When you strike the ball like that, you know you’ve got a good chance to score. Their goalkeeper got the tip of her fingers on the ball, but it went in.”
The final soccer game of the regular season is Thursday night against St. Cloud State.
Astros look tough
My favorite time of the baseball season is the league playoff tournaments to determine the World Series entrants. That’s usually when all remaining teams have some playoff experience under their belts and don’t yet have World Series pressure.
My prediction before the playoffs began was that the Houston Astros would not only win the American League title but also the World Series. The Astros are skilled and deep at every position, and also have a superb pitching staff, led by Justin Verlander and Framer Valdez as the best 1-2 punch among starting pitchers in MLB.

The Philadelphia Phillies are a surprise entry, having beaten San Diego in the National League final after the Padres had shocked the Los Angeles Dodgers in the semifinal round. The Phillies are everybody’s Cinderella team, but I don’t think they can overcome the smooth, slick Astros.
The series opens Friday and Saturday, giving both teams most of a week to get prepared, and I’m picking the Astros to win it, and I hope it goes six games.