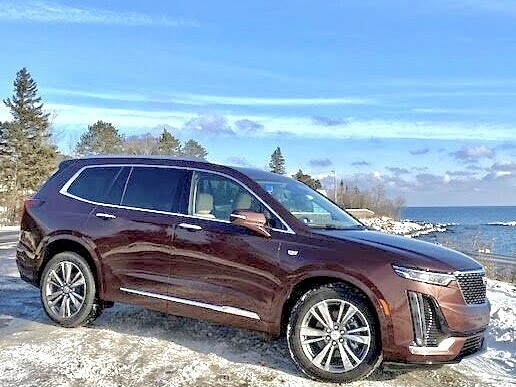 So complete is our devotion to SUVs that we are almost numbed by the over-thje-top luxury and features of the biggest and most expensive of the breed, whether from the U.S., Europe, or Asia – where the most recognizable vehicles from Japan are now confronted by new challengers from  Korea.
But let’s pause a moment to examine what you can find among those next-to-the-top models, the midsize luxury SUVs that are examples of how you can have your maneuverability without conceding anything to the biggest luxury models.
Our three examples are just the tip-of-the-escalating increase in mid-luxury wagons.
The world’s leading builder of the great variety of SUVs comes from Toyota, where that brand name has numerous offerings, but it also had an entire segment of its own for luxury cars and SUVs in Lexus.
You can get a large luxury SUV wearing the GX nomenclature, but we’ve gone just beneath that size to the LX600, loaded up with not only luxury but also Toyota’s top sporty add-ons.
In the U.S., General Motors builds all sorts of SUVs under the Chevrolet name, but also moves upscale to Cadillac, where the Escalade is king of the hill.
For this example, though, we’re dropping a segment to the XT5, an alphanumeric SUV that has obvious benefits in steering and handling agility, and certainly doesn’t lack for those who don’t want to downsize but give up their luxury.
And from South Korea, where Hyundai and its decade-old partner Kia have taken on every phase of the car and SUV marketplace, and risen to rank among the very best in quality and economy as well as sticker price.

LEXUS LX 600
This model is not just the luxury end, but is the “F-Sport Handling” version that gets the F-Sport treatment Toyota used to reserve for off-road competitors in its fleet and graduated to sporty sedans.
The LX 600 handles the new role admirably, with a 3.5-liter twin-turbocharged V6, a unit Toyota flaunts to prove that nobody needs a V8 if searching for power and performance anymore. This LX 600 encases you in a luxurious interior, but also provides 409 horsepower and 479 foot-pounds to torque when you put your foot down hard on the gas pedal.

Full-time four-wheel drive with F-sport suspension upgrades including suspension tuning, stabilizer bars, special dampers and an 8,000-pound maximum towing weight, riding on 22-inch forged wheels and governed by a 10-speed automatic transmission.
The exterior seems low and sleek, and it is, but it will still seat seven if you put the way-back third-row seats in place. There are also F-Sport cosmetic touches such as the aluminum pedals and perforated leather steering wheel cover, the front and rear fascia with a mesh grille insert and rear valance, denoted by exterior badges.

All of the most sophisticated connectivity and safety technology is at work here, as well, monitoring for blind-spot intrusion, lane departure and the need for parking assist. Cloud navigation with “destination assist,” and an audio system that must be heard to be appreciated. It is a Mark Levinson 25-speaker, 2,400-watt surround-sound system.

All these features are high-buck, and the base sticker is $101,000, with the options pushing that up to $105,005.
CADILLAC XT5
Cadillac’s Escalade shares a platform and bodywork with the Chevrolet Suburban and GMC Yukon Denali, and it also shares parts when you drop a size to the XT5.
When examining the array of Cadillacs in that area, be careful, though. You might get an XT4, which has high-performance overtones, or the XT6, which seeks the luxury buyer.
The XT5 is a good combination for everyday driving, available in front or all-wheel drive, and the test vehicle came with the venerable 3.6-liter V6 worth 310 horsepower and 271 foot-pounds of torque, running through a 9-speed transmission.
Interestingly, Cadillac designers chose to make the XT4, XT5 and XT6 all look pretty nearly identical, meaning you have to walk around to the rear to read the little badge to be sure what you’re looking at.
In addition, the XT5 can be bought in Luxury, Luxury Premium or Sport trims. The test vehicle, which was a deep, luxurious Rosewood Metallic – red, to you and me – was the Premium Luxury model with all-wheel drive. Its base price was $54,995 but quickly rose to an as-tested $70,965 with specific upgrades.

Among those are the leather seats for six, upgraded performance suspension all around, and a 14-speaker Bose Performance series audio system.
KIA TELLURIDE SX
The bargain of this group is clearly the Kia Telluride, which is that company’s attempt at proving it can, indeed, build more than high-efficiency economy compact cars and SUVs. The Telluride was built around three rows of seats, although the generous storage areas can be greatly expanded by folding down the seats aft of the front buckets.

The test Telluride was an SX, equipped with a 3.8-liter gas-direct-injected V6 with 291 horsepower and 262 foot-pounds of torque, governed by an in-house 8-speed automatic transmission. Performance is impressive, and fuel economy in the mid-20s is easily attainable.
You can get it with 2-wheel drive, but the tester had the active, on-demand all-wheel drive, and a driver select mod switch to alter the firmness of the ride.
Kia has a clear edge in some of the safety technology, including remote video views of left and right lanes when you signal a lane-change or turn. It also has an impressive lane-departure and lane-centering system, which will keep you centered in your lane even if you take your hands off the steering wheel in a curve.

Comfort and a firmness that goes along with the impressive seats give the driver a confident feeling of control.
With the best warranty in the industry – 10-year, 100,000-mile powertrain – the Telluride has a base price of $44,590, and the tester reached $51,010 in its gleaming glacial white pearl exterior with black external trim that includes the grille and the 20-inch black alloy wheels.
Harman Kardon makes the surround sound system, and the towing package includes self-leveling rear suspension.
Vehicles like these three prove that just because you might be able to afford the costliest status-symbol SUVs, you can save a chunk of money and get all that you want in a family SUV by going down a size.