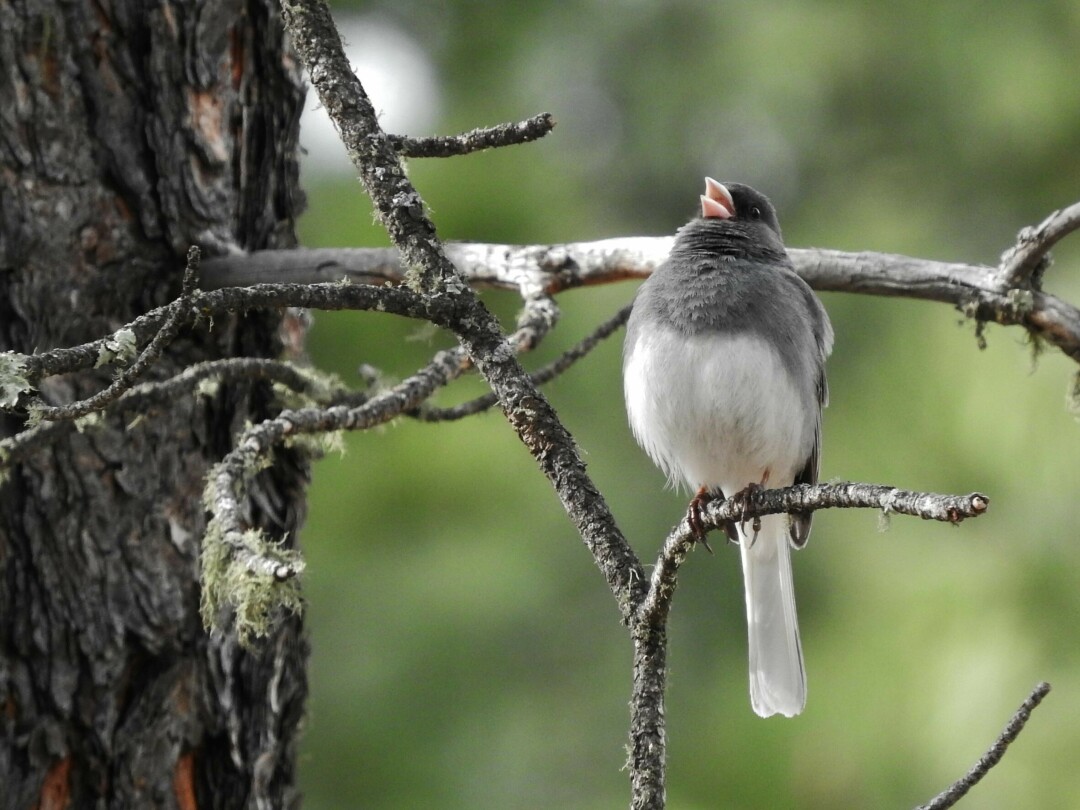 “Like the chiming of myriad crystal bells, a flock of juncos was gossiping among the branches. Their notes were so fragile and unbelievably pure they seemed to float on the air.” – Lois Nestel. Photo by Emily Stone.

It’s hard to know where to look at this stage of fall. Bursts of color still shine from tamarack swamps and groves of oaks. Bedrock outcrops, old foundations and other bits of history are peeking through the bare trunks of “see-through” season. And dry leaves dance ahead of the breeze, tickling our eyes for attention.

Among those leaves are little dancers who don’t need wind to help them fly. Flocks of dark-eyed juncos and snow buntings have arrived from the far north. They will help animate our landscape now that the warblers, vireos, hawks and other friends have left.
Some folks call juncos “snowbirds,” because their plumage imitates the winter color scheme of dark skies above and white snow below. Here, in their overwintering habitat of the lower 48, they also seem to bring the snow with them as they move south each fall.
Dark-eyed juncos breed across Canada. The northern forests of Wisconsin and Minnesota are at the southern edge of their mid-continent breeding habitat, and we sometimes see a few juncos through the summer.
You can identify them by the flash of white on their outer tail feathers as they fly away. The real influx comes when the leaves begin to fall, as juncos head south to their winter range.
Under the feeders, along roadsides, and in open areas, juncos will forage by hopping, scratching and pecking at the leaf litter, and flying up to glean food from low twigs and grasses. By eating ragweed, crabgrass and pigweed seeds in the winter, and insects in the summer, juncos help keep pests under control.

And they make eating weeds look fun. These sparrow-sized birds sometimes land on the top of a grass stem and use their 25-gram bodyweight (the equivalent of 25 paperclips) to “ride” it to the ground. From there, they can stand on the seed head and feed more easily.
Dominance hierarchies in winter flocks mean that females get chased off food when there are too many males around. As a result, females tend to migrate farther south.
There’s another reason for the difference in their preferred winter latitudes. Males will risk harsher weather in order to get a jump start on spring migration and arrive first at prime breeding territories. When the females arrive a little later, they get to select a nest site within the territory of the male they choose.

While juncos get the nickname “snowbirds,” snow buntings take that idea to the extreme. There is no apparent northern limit to their breeding range, and they have the ability to spend the winter farther north than almost any other bird.
While snowshoe hares turn white for the winter, snow buntings add brown and spend the season with rusty patches on their feathers. It helps them blend in on the bare fields and among the grass stems where they feed in the United States (eating more ragweed seeds, thank you!).
By April, that color has worn off to reveal pure white plumage that will match their still-snowy Arctic breeding habitat.
Just like juncos, the winter habits of male snow buntings are dictated by their need to return early to claim a breeding territory. Since snow buntings nest in deep cracks and cavities in rocks to avoid predators, their nesting sites are limited. Not going too far south and arriving early back north to claim one is essential.

Nests in those cold rocks must be lined with fur and feathers, and the eggs incubated almost constantly. Males are attentive, and bring food to their mate every 15 minutes.
While it may seem excessive for snow buntings to endure such cold, their breeding is carefully timed so that chicks are hungriest right when insects are most plentiful. Hard winters seem to keep this timing well-matched.
Counterintuitively, warm springs that shift breeding earlier produce a mismatch with their food source. Studies show that nestling weight declines.

“Those lovely little wraiths, the snow buntings,” wrote Lois Nestel, the museum’s founding director and naturalist, as she detailed the beauty of winter in the Northwoods.
Of juncos, she wrote: “… I was greeted with one of the woodland’s loveliest sounds. Like the chiming of myriad crystal bells, a flock of juncos was gossiping among the branches. Their notes were so fragile and unbelievably pure they seemed to float on the air.”
As the swirling dance of these two snowbirds livens up the roadsides of fall, I’m grateful that they make the Northwoods their winter home.
Author’s Note: Portions of this article are reprinted from 2015.