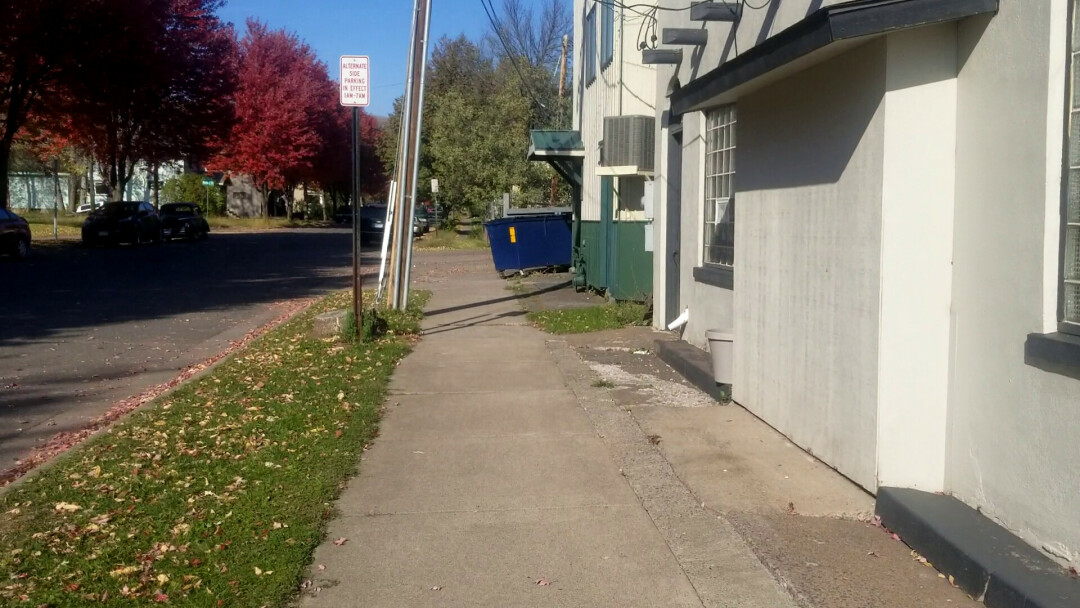 As everyone in Duluth is aware, Friday was a warm day for the late date of Oct. 20. Minnesota public school kids were having a four-day weekend and the fall colors were bright. All this meant many people were in town by the lake or touring Skyline Boulevard.
I selected the 57 Avenue West block of Grand Avenue as a walking tour location for article research and a YouTube video. It is an interesting block of Duluth businesses on the edge of a quiet neighborhood, currently lined with trees with fire-red leaves.
I took my dog Sarg along for the walk, who is more interested in his own “business” opportunities.
Now all these businesses are in one big row. So, technically you could say the whole northside of the block is one big building. Still, you can see where they change, allowing me to give my somewhat arbitrary opinion of where a particular building stops and starts.
Starting at the corner on 57th Avenue West, the first one-story building houses Eye Clinic West. After this is a two-story brick building containing David A Stromgren law offices and Salon of the Valley Spa.
Depending on how you look at it, the next building containing Grand Galleries Antiques and Duluth Antique Market Place could be considered a different building or the same. It is attached and looks very similar to the previous building but is a little taller. Because of how the intersection is, the buildings are joined at a gentle angle, much less than 90 degrees.

Both buildings have green painted wood surrounding the windows and the same color brick. Both also appear to have apartments on the second floor.
Now the next three buildings are obviously different buildings that are side by side. The first of the three is the small frame two-story building containing Ace Barber shop. Right next to the barber building is a brick building of approximately the same size containing the offices of Paul T. Paczynski C.P.A.. Then there is a building larger than the previous two, with white siding. This is the home of West Duluth Sewing and Design.

The different looks, different sizes and different heights of the building contrast with the homogenized look of a suburban strip mall. You almost need to go on foot to admire the up and down steps of the various buildings having a more of an old town feel.
Besides the main downtowns of Duluth and Superior the Twin-Ports have a few mini-downtowns with closely packed shops like the West End, Piedmont and East Superior. This area started out independent of Duluth, as evidenced by it having a “Central Avenue.”
Continuing west, we reach a very historic building on the block. Big for this block, the Doric Building once contained the Doric Theater. According to cinematreasures.org the theater opened in 1920 and closed in 1958. The building now houses Dream Dance and Holden Insurance Agency.
In the next building is the happy-looking and decorated Sunshine Café. It was closed when I was there but is currently open Tuesday through Thursday. I plan to visit this café sometime and do an article on it.
The next building is painted differently than Sunshine but looks very similar. So, you might call it the same building. After this is the distinctly different one-story building with Nylund Electric and La Spirit European Salon.
The last building before making the sharply angled turn onto 58 Avenue West is the building with Bailey Builds. I guess you could say this building is kind of Spanish or tropical looking. This is another place I want to tour soon. The owners look nice on their website, and it said they are dog lovers. So, I’ll see if I can bring Sarg along.