Three Horsemen of the Apocalypse 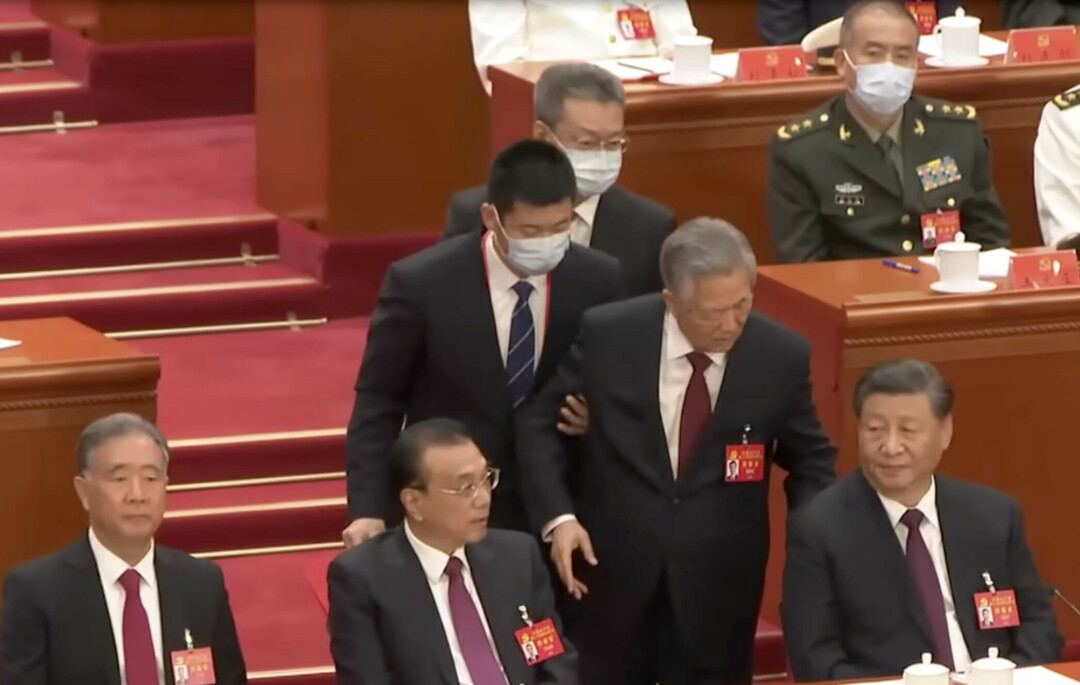 Xi’s Napoleon moment came when he barely reacted as his predecessor, Hu Jintao, was strong-armed out of the People’s Congress. (Youtube screen capture)

A little more than two centuries ago Napoleon Bonaparte put an end to “Republican” (King free) France by inviting Pope Pius VII to crown him emperor of France.

The spectacle he contrived was symbolic. As the obsequious Pius VII held the crown, Napoleon took it from him and placed it on his own head. Bonaparte, not a mere Pope, annointed himself.

Something like that happened a few days ago in China at the Congress of the Chinese Communist Party.

Xi Jinping was given the opportunity to break the precedent set by post-Mao leaders. They wanted to make sure no new Mao tse Tung arose to rule China. Without making it the law, they tried to set a precedent and insure an American-style rotation of leaders.

We can see the results of their initial policy in today’s Capitalist/Communist China.

Until Covid and Xi, it seemed only a matter of years before China overtook the United States. Today I’m not betting on it or against it. I think, I hope, that a nation living by lies is doomed to fall short.

Xi’s Napoleon moment came when he barely reacted as his predecessor, Hu Jintao, was strong-armed out of the People’s Congress. The astonished Hu tapped Xi on the shoulder as if to ask if this could possibly be happening. Xi, with a wan smile, barely looked over his shoulders at the departing Hu.

This is the New China’s one-man rule.

Through most of my 71 years there have been two great powers with a third, China, waiting in the wings to resume 2,000 years of world supremacy. It ended when European invention eclipsed orderly China’s technological lead.

While America was gang marching Indians off the rich soils of the South to expand slavery, China was prostrated by English “merchants.” They persuaded Queen Victoria’s  government to start the “Opium War.”  China’s defeat allowed them to turn China into a narco heaven of opium dens.

For a decade China has been on the cusp of eclipsing America’s century of world leadership. With a rich land the size of the U.S. but with four times the population, its people have an unstoppable work ethic.

Vladimir Putin is another tyrant in the thrall of Joseph Stalin. He came to power as the USSR fell apart and kleptocrats blessed by the KGB (secret police) carved up state assets.

The best-connected, most cunning and ruthless insiders became plutocrats. Putin reached Tsardom before Xi became Emperor but his grandiose stupidity may teach Xi a lesson on overreach.

The Ukraine is an unmitigated disaster for Russia. Xi, who snuffed out Hong Kong’s independence, seems hell bent on making Taiwan his Ukraine. Having imposed something on the order of America’s Indian schools on China’s Uighur population Xi is nothing but single-minded. He might try it.

Critical to Putin’s and Xi’s success has been control of the media and the state’s monopoly on truth.

Now the United States is grappling with the truth and its near infinite varieties on the Internet, much of it coming curtesy of other nation’s secret police. Despite our increasingly divided political state most Americans still agree upon the sanctity of the First Amendment.

I would like us all to recall the words of our president who bridged the Stalin-Mao years Franklin Roosevelt. He cautioned that “the only thing we have to fear is fear itself.” That’s especially important now that fearing each other has become the order of the day.

Such a fear took hold of Salem, Massachusetts, when the English had a toe hold on their new continent.

Fear of witches spread among some of the world’s most educated people. These were the Puritans, who taught and studied Greek, Latin and Hebrew to better understand the Bible. In their fear they executed many innocents.

Echoes of this fear have rung out through the land as America evolved – fears of Indians, slaves, immigration, communism, immigration again and now dubious elections.

The last of these has always been a worry but in 1860 before the secret ballot was adopted and votes could be bought with whiskey no one doubted that Abraham Lincoln was elected even though his name didn’t appear on half a dozen state’s ballots.

Why don’t we trust ourselves today?

Today Democrats are seized by the fear that voting access is compromised; that dark money’s gravity is too strong and that the judiciary is turning a blind eye to Republican gerrymanders.

Republicans are seized by the fear that unseen hands have tampered with voting machines and that people who have no right to vote are stealing the franchise.

Today’s paranoia manifests itself in talk of a new civil war. This raging fire must be addressed to the mutual satisfaction of both parties not simply for the fate of America but for the fate of the Earth.

There will be Apocalypse.

Whatever else comes about as a result of the election of 2022 Americans of goodwill on all sides must address this division.

Harry Welty also shoots his mouth off at lincolndemocrat.com.