Death of a baby 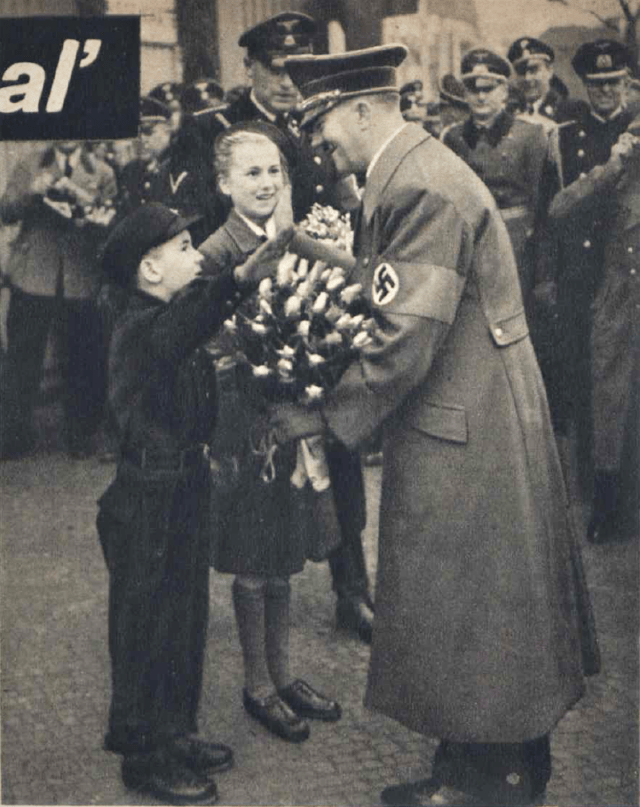 Why did one of the most civilized countries commit crimes against humanity?
At the end of World War II I was 13 and enthralled by aircraft carriers, 70-ton tanks, B-29s and uniforms.
Since then, I have read a dozen books and hundreds of articles about the Holocaust, and Corky and I have spent many hours in the Holocaust Museum in Washington. I have always wondered why human beings from one of the most civilized countries in the world could commit such crimes against humanity.
1. At Auschwitz death camp “civilized” humans cut seven tons of hair from bodies from the deadly gas chambers and baled it so it could be shipped to German cloth and carpet mills. A German manufacturer figured it was worth about 33 cents per kilo. Gold teeth fillings were also removed at this time and sent them to Berlin for refining.

2. In collecting evidence for war crimes trials after the war, lawyers found that chimneys spouting smoke and smell to the heavens from the ovens burning 1.5 million bodies from gas chambers had 18 inches of human fat on the bricks.
3. In another warehouse a pile of 40,000 shoes waited for transport to Germany for use by Aryan adults and children. Court authorities determined that the other three million must have been on German feet.
4. German engineering and construction firms bid on contracts to design and build gas chambers and crematoria in 17 death camps scattered throughout Europe.
5. Adolf Eichmann insisted on having computers and equipment to keep track of train cattle cars carrying Jews and physically and mentally handicapped to the various death and slave labor camps.
6. Dr. Josef Mengele saved the life of Jewess Ruth Elias when she got off a cattle car at Auschwitz because she was obviously pregnant. He took her baby at birth because he wanted to see how long a baby could survive without food or water. He bound Ruth’s breasts so she couldn’t nurse the baby and he watched the baby for seven days. Another doctor was so shocked at the treatment he gave Ruth a syringe filled with morphine and told her to kill her baby. She followed his instructions and killed her own baby. She survived Auschwitz.

7. In late September, 1941, German soldiers assembled Jews, poor, sick and elderly of Kyiv, Ukraine, confiscated all their goods, marched them to a deep ravine called Babyn Yar, stripped them naked, and shot and murdered 33,771 Jews and handicapped. Babyn Yar was the first mass Killing of the Holocaust and has remained the largest single mass killing ever committed.

Why did citizens of the most civilized countries in the world commit these crimes against humanity? Because they were raised by Adolf Hitler to do so.

A short, intense history of how civilized people became criminal barbarians in one generation
William L. Shirer spent four decades covering Germany from 1925 and spent 5.5 years researching material for his remarkable history titled The Rise and Fall of the Third Reich/ A History of Nazi Germany. Published in 1959, the 1,599-page fine print is still the most thorough history of his regime ever written since Hitler committed suicide in his Berlin bunker in 1945.

I have been collecting books since college and often spend a few hours per month scouring thrift stores for treasures of the mind. About a month ago I discovered a 171-page picture and text book titled Hitler Youth: Growing Up In Hitler’s Shadow by Susan Campbell Bartoletti which cost me a dollar because it had a hard cover. Mrs. Campbell writes children’s books and lives in Moscow, Pennsylvania.

In 1939 the Hitler Youth organization had 7.5 million boys and girls enrolled. Mrs. Campbell interviewed hundreds of former members for her book and selected a few for their stories about the organization.
Her book holds the answer to how German military, doctors and politicians tortured, shot, burned, gassed, humiliated, cursed, frightened, raped, enslaved, whipped, poisoned, murdered and performed deadly medical experiments on their one-time neighbors without remorse – but with Nazi pride. They refused to be “replaced.”

First formed in 1926, the organization of young boys and girls served Adolf Hitler well through the last days of his Third Reich (of a thousand years!) in 1945.
He understood in 1933 young people could be a powerful political force. He said: “I begin with the young. We older ones are used up. But my magnificent youngsters! Are there finer ones anywhere in the world? With them I can make a new world!”
He certainly made a different one.

The critical race theory as taught to the Hitler Youth
We know now that we all came out of Africa and that human differences are only skin deep.
But the Nazis, old and new, “fine people” or terrible, considered the Aryan race to be the “master race.” Blond hair and blue eyes, Nordic or Caucasian, made Aryans superior to all other humans – particularly Jews.
To join the Hitler Youth, boys and girls had to prove they were healthy and had no hereditary diseases. No Jews or “half breeds” were allowed. A few physically disabled children were allowed to join the Disabled and Infirm Hitler Youth. Mentally handicapped could not join either group no matter how faithful the parents were to the Nazi Party. Jews who had converted to Christianity were not eligible either.

Parents of Hitler Youth had to be members of the Nazi Party so children begged their parents to be “fine” Nazis.
Hitler Youth listened to family radio stations that were tuned to broadcasts approved by headquarters. Laws banned foreign news and “impure” or “un-German” programs.
Nazis knew that young boys and girls liked uniforms, flags, bands, badges, weapons and stories about heroes. Hitler organized his youth as an army, complete with regiments. A teenaged boy could rise from “boy” to lead a squad, platoon, company or even a regiment. Girls could rise from “maiden” status in the Hitler Youth to the level of BDM that was equal to a regiment.

Each month Hitler Youth headquarters sent out the programs for the weekly meetings of regiments often led by 17-year-old kids. They sang “patriotic” songs, played games, learned slogans, read propaganda and studied military tactics.
Hitler Youth boys trained for the military life from age eight while girls were trained to be good wives and mothers. Weekend activities were designed to build physical and mental endurance and determination. Weekend meetings meant hiking, sports, campfires and youth hosteling.
At 10 years old, Karl Schnibble said: “We went on overnight hikes, slept in tents, fought mock battles, and march to the beat of the parade-corps drums. We shot air rifles. We had campfires and large bonfires and sang patriotic songs. As we got older, we were taught to read maps.”
At age 14 Hitler Youth advanced to the Hitler Jugend, where they learned about military formations, tactics, how to shoot, throw hand grenades and how to storm trenches. They were involved in these military activities until age 18.
At age 14 girls advanced to the BDM where they stayed until age 21. To age 18 they emphasized sports, studied Nazi ideology, nursing, household training, social work and air raid training.
To age 21 they belonged to the Faith and Beauty group, where they practiced physical grace, dancing, hygiene and charm. The purpose was to make young women strong, beautiful, proud and self-reliant. They demonstrated their strength by competing in javelin throwing.

German Jew Heinrich Heine in 1830s: “Where one burns books, one will, in the end, burn people”
On May 19,1933, Hitler Youth, university students, and Storm troopers in many German cities conducted the largest organized book burning in the history of the civilized world.
Berlin had the largest when trucks, oxcarts, wheelbarrows and bags were emptied to build a huge pile of banned books and ignited with the aid of gasoline. The pile burst into flames to record heights while the throng marched around the pile, waving torches, and singing “patriotic” songs.
More than 100 years earlier, German-Jew poet Heinrich Heine sent this warning to all book burners: “Where one burns books, one will, in the end, burn people.”
Here we are, almost two hundred years after his warning, still suffering from millions of book banners and burners in dozens of countries around the world.
Hitler knew how to divorce children from parents. After a Hitler Youth meeting, 8-year-old Elizabeth Vetter told her parents she didn’t want to belong to them anymore. She said she belonged to Hitler. Her angry parents opened the front door and said: “If you belong to Hitler, then go to him now.” They both pointed down the street and closed the door behind her. Her youth leader saw her crying on the steps, asked her why, and then reported her parents to the police. She didn’t see them again for about a month.

Elizabeth told Bartoletti: “We never discussed it again.”
Hitler Youth member Walter Hess reported to police his father had called Hitler a “crazed Nazi maniac.” Walter’s father was immediately sent to a notorious concentration-death camp in southern Germany named Dachau.
In April of 1944, when casualties among regular troops mounted and many German soldiers knew they would probably lose the war, one SS division, designed to protect Hitler at all times, was 20,540 teenagers strong. The commanders felt they were old enough to fight but too young to smoke. Instead of receiving cigarette rations they got candy bars.

In 1943 Hitler Youth older than 15 were assigned to 88-mm anti-aircraft batteries in German cities. They were called Flak Helpers. Taught to handle weapons when younger, they quickly learned how to handle larger weapons. Younger boys and girls 13 to 15 assisted their older brothers by working the searchlights and carrying ammunition.

Entire high school classes were required to join the antiaircraft auxiliary and assist the Hitler Youth in defending the skies.
On D-Day of June 6, 1944, the SS division composed of teenagers was ordered to defend the beaches of Normandy. Some young troops jumped on trucks and tanks and rushed to the battle zone while others marched 70 miles to the beaches.
The division, called the “Baby Milk Division” by the Allied forces, were quite successful at first. One 17-year-old soldier described blowing up an American tank at night: “If you crack open a tank with a bazooka, it melts the metal. That glowing metal sprayed as high as a church steeple. It’s an unforgettable sight.”

As the Russian Army entered Berlin, Hitler Youth fought them in subways, cellars and tunnels under the city streets.
Seventeen-year-old Walter Knappe was a Hitler Youth unit leader in the battle of the sewers: “We fought in subway tunnels, and that is the worst kind of combat. You see only flashes of fire coming at you: flamethrowers and trace ammunition.”
On April 30, Hitler committed suicide in his bunker – while his young boys told the German people he had died heroically leading his armies against the invaders.
The education of Hitler Youth explains why young “civilized” Germans could fire machine guns at thousands of naked men, women, and children in death pits all day and celebrate the act at night.
They were not born Nazis.