Shane and some out-of-towners 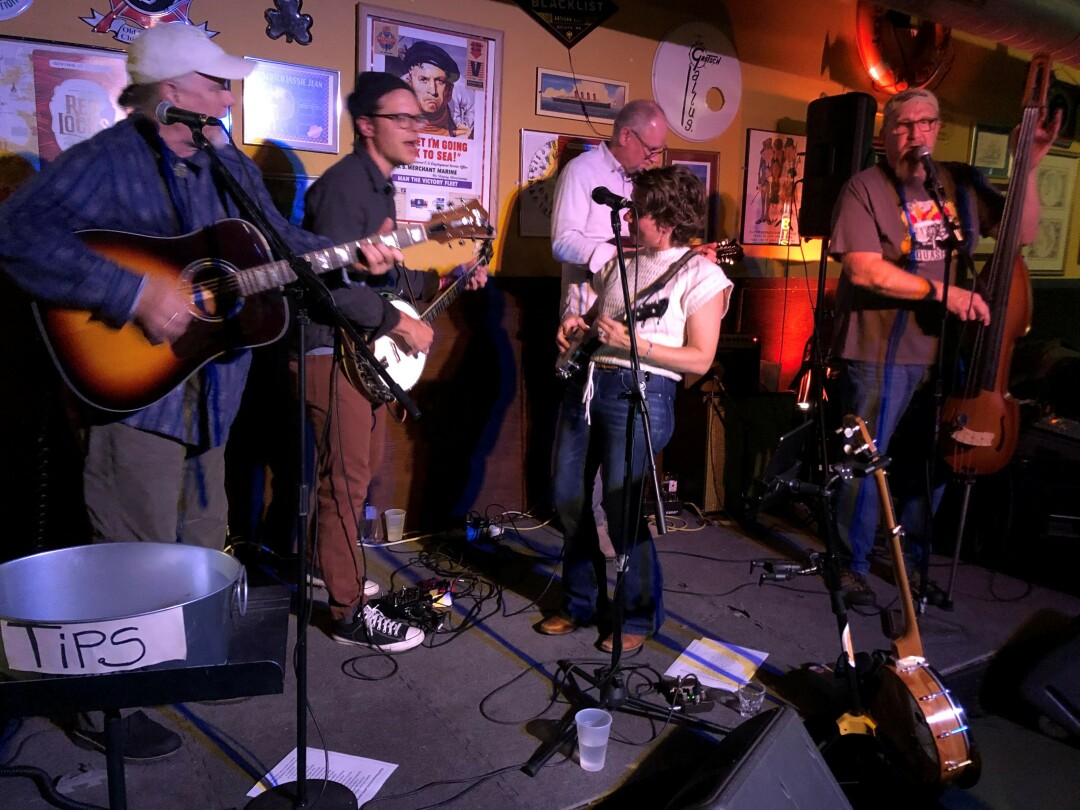 What a week for some great music! I was lucky enough to attend a private concert on Tuesday, Oct. 11, featuring soloist Shane Nelson on acoustic guitar and harmonica. Though I have mentioned him in past reviews, this is the first time I have enjoyed two hours of him playing his original music.

A Superior native, Shane is well known around these parts, having played pretty much ever since he received a guitar and small amplifier from his parents for his sixth birthday.

His father, Glenn Nelson, a guitarist himself, showed him a few chords and so Shane’s musical odyssey began. Performing in school talent shows, competing in the 2009 Battle of the [High School] Bands at the DECC, playing for weddings and leading the band Crescent Moon with high school friends for these past few years, he likely has 10,000 hours under his belt.

In 2021 he won the singer-songwriter competition, a feature of the annual Duluth Dylan Festival, for his composition, “Mason Lowe” (viewable on YouTube, via Song From The North Country). It was one of the songs he performed on this afternoon.

Shane released his first self-titled album on CD back in 2020, from which he performed “Focus.” It has a Calypso beat he produces by tapping his acoustic guitar. Several other songs he played from that album included “Born Too Late,” “Nothing on Me” and “Beautiful Love Goddess.” (Some of us couldn’t help singing along on the chorus of the latter.)

His patter between songs illuminated his inspirations and experiences performing, as with “I Do What I Do,” written after he drove to Hayward, Wis., for a gig that had few attendees. One of the memorable lines in it was “dreaming on fumes.” Another of his recorded songs, “Go Go Go,” was a crowd pleaser.

Interspersed with his previously recorded tunes were a quite a number of new compositions that he hopes to record when the requisite finances are in hand. “Going Home Alone” was inspired by playing with a group of musicians who weren’t into hanging out after their session; while “Burn It Down” was a tale of a relationship coming to an end.

Shane also shared a work in progress, “Christmas Kisses” that he worked on for a movie filmed here in Duluth this past summer.

With Halloween coming up, Shane presented a song he wrote last October, “Paranoia,” in the creepiest way possible. This may have been a stretch for him (he just isn’t a creepy guy) but it amused his audience. He followed that up with another new original, “Hold On” which showcased how Dylanesque his lyrics are in their complexity and exploration of deeper emotions. Another along that line was “Best Friend For Life,” which touched on the sensitivities of close relationships.

Shane’s emotive qualities engage his audiences and serves to give each song a distinctive flavor. Couple that with his fine guitar work and memorable melodies, it seems only a matter of time before he reaches a far wider audience.

Shane wrapped up this late afternoon performance covering Dylan’s “Just Like A Woman,” a heartfelt rendition that highlighted his ability to personalize even well-known songs. I would encourage folks to check out this consummate musician at his upcoming gig at Carmody Irish Pub on Saturday, Oct. 22. Or if you are up for a road trip, he’ll be at the Rapids Brewing Company, in Grand Rapids on Nov. 4.

And speaking of Carmody, the next evening, Oct. 12, I was treated to the sounds of the Minneapolis-based Potluck String Band in a last-minute “pop-up” gig there. Normally Potluck is a 10-member band, but this evening it was just four of them – Scott Anderson on guitar, “Good Susie” Gilbertson on banjolina, John Beasley on mandolin and Jimbo Miller on an electric upright bass, ably aided by our local Harrison Olk standing in on 5-string banjo.

This was bluegrass at its most entertaining with a wide range of covers, one being the Moody Blues’ “The Story In Your Eyes.” Others included “Last of My Kind” by Jason Isbell and the Grateful Dead tune “Dark Hollow” plus one by Johnny Cash. They kept the place jumpin’ for a good couple of hours presenting some originals such as “Whitewater.” Miller explained that the song is about how the music life is a lot like whitewater rafting. If we are fortunate, we might see them back in the Twin Ports one of these days.

It was on to Cedar Lounge in Superior the next night to hear the newly formed band, Derecho with Alan Sparhawk (guitar), Cyrus Sparhawk (electric bass), Al Church (drums) and Izzy Cruz (congas). They played jazzy funk instrumentals that were worth hearing. The funky sound emanated from Cyrus, who composed most of the tunes, with his Motown-like bass lines. Izzy on congas and Al on drums provided intricate and danceable rhythms. “Want It Bad” was one of their “fresh tunes.” They also covered a Curtis Mayfield song. One of the last tunes was one that sounded a bit like primal screams, which may or may not be your bag.

The band started later than expected and got cut short when the bar closed shortly after its regular 10 pm time. However, what was presented was a good teaser for their next couple of scheduled shows there – Thursdays, Oct. 20 and 27. Alan left us with the thought that “time with friends is gold” – a fitting conclusion to their abbreviated set.

It’s always nice when after only one hearing a group exceeds your expectations the second time you see them. This was the case with the Dan Nelson Trio which performed at Sir Benedict’s on Saturday, Oct. 15. I first saw this group, then with a drummer to form a quartet, back in early August up in Grand Marais.

On this evening Dan Nelson, an accomplished jazz guitarist, was accompanied by Martha Marnocha on keyboards and vocalist John Gruber on bass guitar.

The three drove down from Grand Marais for their first gig in Duluth. They opened their two-set show with the John Mayer and Wynton Marsalis song, “I’m Going To Find Another You,” that demonstrated Gruber’s wonderful vocals. Then the trio got into an old standard instrumental number, “Killer Joe.” And so it went all evening, with ballads balancing the jazzy instrumentals. They also delivered the blues with “Driftin’ and Driftin,’” a song associated with the Paul Butterfield Blues Band.

Another remarkable rendition was of Billie Holiday’s “God Bless The Child,” with Gruber’s bluesy vocals nicely underscored by his two bandmates. The audience really listened, chatting was subdued and the overall vibe was sweet, easy listening in the very best sense. I hope they will be invited to play here in the Twin Ports again.

Finally, heads up for music lovers looking for a fun time with live music. Duluth Pottery and Tile will host a Fifth Anniversary Party on Saturday, Oct. 29 at its store in Lincoln Park from 6-9 pm, where folk singer Jerree Small will perform. This could be a needed antidote to all the horror on offer this season. See you there!