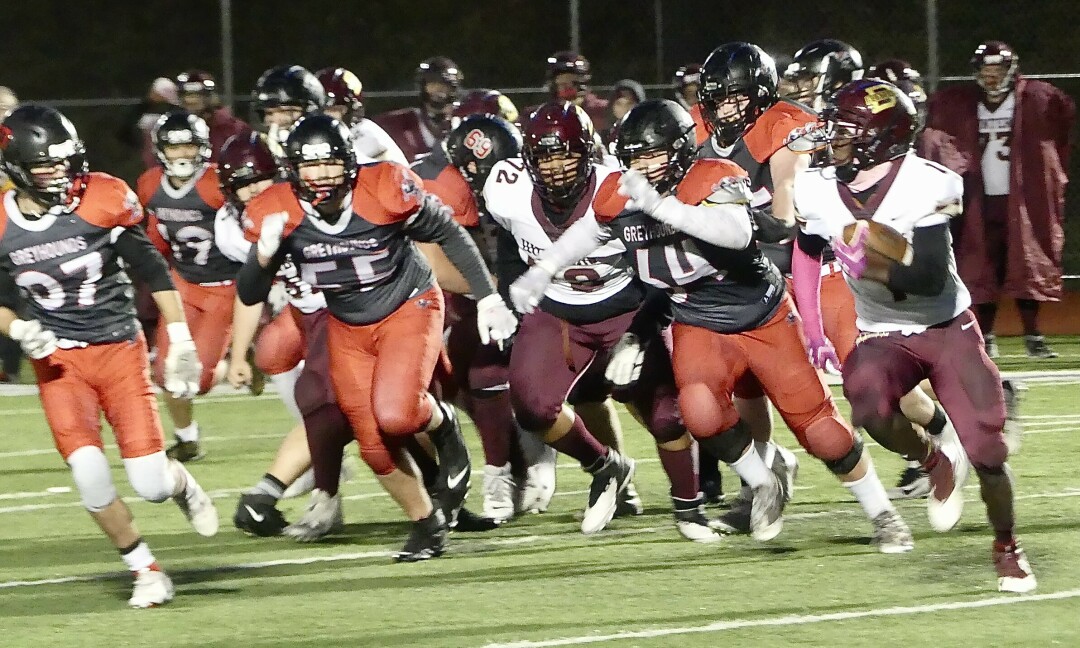 Denfeld's elusive Dashawn Moore proved unstoppable for Duluth East, as he led a 14-point fourth quarter for a 20-19 victory. Photo by John Gilbert.

It was like the good ol’ days when Duluth high school football took over the sports scene on Friday nights, and when the three biggest public schools – Duluth Denfeld, Central and East – would fill the stands at Public Schools Stadium while their selected gladiators went out on the soggy grass and battled for supremacy.

It hasn’t been that way for a decade or two, because of the sociological upheaval of things like the “Red Plan,” which closed Central and sent all its students to East and Denfeld, and to the emergence of a new regional power in Hermantown.

The dwindling of Duluth’s football prospects has left Denfeld only a shell of its former proud self, and the Hunters won only three games total in the last three years.

East stayed strong, but because it was the largest, it had to go south to play some of the powers of the Northern Twin Cities suburbs in order to advance at playoff time.

But last Friday night, at East’s version of Public Schools Stadium, with its artificial turf and bright lights, Denfeld and East met for what became a masterpiece of high school football.

East has a superstar running back in lightning-quick Austan Overdahl, and Denfeld had emerged as a threat, winning twice already this season, being led by No. 1, Dashawn Moore.

Overdahl carried repeatedly and led East down the field, breaking the scoreless tie with a touchdown plunge. East had a clever strategy, to make sure kickoffs didn’t go deep enough where the lanky but also lightning-quick Moore or Taye Manns might get a runback.

After the touchdown, the Greyhounds tried a squib kick, which would have worked, except that it took a weird bounce and went deeper than planned.

Moore moved up and scooped up the ball at about the Denfeld 30, then he fumbled it, then he scooped it up again and took off – speeding past everyone wearing red jerseys as he sprinted all 70 yards for a countering touchdown.

The extra point failed, which seemed important when East used Overdahl as a decoy and sent Michael Kastelic 27 yards for another touchdown, putting East up 13-6 at halftime.

Turns out Overdahl wasn’t a decoy, he was injured when he was taken down hard on a second-quarter run and never returned. But the Greyhounds increased their lead to 19-6, also missing on a 2-point conversion try.

Trailing 19-6 in the fourth quarter, the Hunters were still close enough to be dangerous, and Moore went 21 yards for a touchdown to cut the deficit to 19-12.

The Hunters stopped East a couple of times, including when Moore intercepted a Peyton Witzmann pass in the end zone, and, sure enough, as time was running down, Moore scored his third touchdown of the night to close the gap to 19-18.

Time for the conversion, and Denfeld’s Mace Brooks hit Liu Newland for two points and a stunning 20-19 Hunters triumph.

High school football in Duluth is vastly better if both East and Denfeld are strong, and as those in the packed grandstand at Ordean Stadium will attest, both are capable of putting on an exciting show.
In recent years, winning at playoff time is all that matters. But just like in the good ol’ days, even playoffs don’t matter as long as they can put on a regular-season show that the players on both teams will remember forever.

The UMD men found out how strong Minnesota State Mankato is in the former WCHA, now the CCHA, last weekend – getting slapped rudely in the 6-0 first game at Mankato before falling in a tight 2-1 rematch.

In the scope of national publicity, UMD’s NCHC remains clearly the toughest and most competitive college conference, and thanks to MSU Mankato, the upper echelon of the CCHA is also potent, just as the top two teams in the Big Ten – Minnesota and Michigan – are strong.

The rest of the Big Ten is battling to rise to that level, and Notre Dame, Ohio State and Wisconsin are improving.

Minnesota beat MSU Mankato 4-1 to open the season, but when they went to Mankato for the rematch, the Mavericks beat them 3-2.

That might mean the two are about even, but it provoked a sarcastic comment from me that by splitting, Minnesota remained No. 2 in the national rankings, and if they split again, maybe the Gophers would rise to No. 1.

Turns out, the Gophers were idle but still rose to No. 1 when Denver lost 4-2 and 3-0 to Massachusetts, as the tide of public relations struck again.

This weekend, if there is any competition between the NCHC and the Big Ten looking ahead to the Pairwise computer ratings, UMD returns to AMSOIL Arena to take on Wisconsin, while Minnesota returns to action to face North Dakota.

On the women’s side, the return of Ashton Bell on defense has led to UMD’s high hopes, but, as usual, the big three of the WCHA remain Ohio State, Minnesota and Wisconsin.

The Bulldogs were idle last weekend but return for the start of the most challenging threat for a successful season – playing at Ohio State this weekend, then coming home to play Wisconsin before going to Minneapolis to take on Minnesota.

If they can win two or three of the upcoming six, they can contend for league and national prominence.