Shades of rot and life 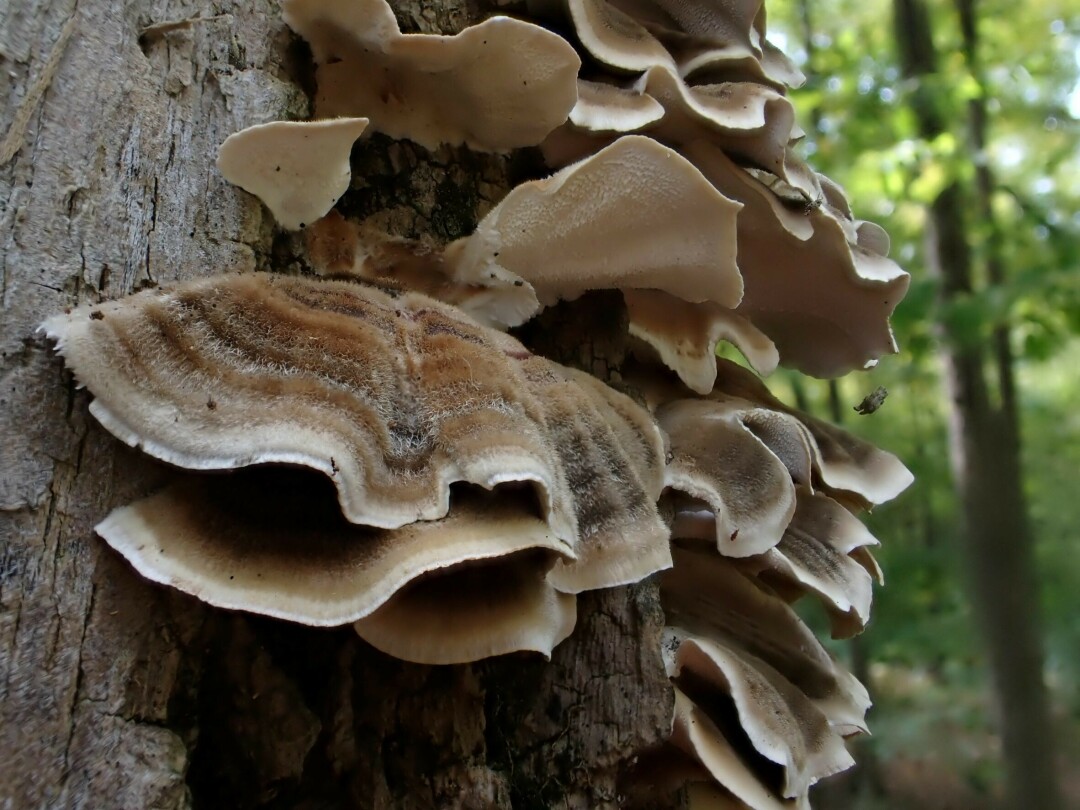 In the dim light, under the thick, hardwood canopy of the forest in Fox River Park, Waukesha, death was everywhere.

Autumn leaves carpeted the ground in shades of brown and yellow, with occasional splashes of blood red. Snags stood among the living trees, their decorticated (a fancy term for bark-less) trunks smooth and dry. And long stripes of rusty brown crumbles marked where fallen logs were melting into the ground.

Of course, life was everywhere, too.

Beside the wide, dirt trail, a ruffle of turkey tail fungus cascaded down the graceful curve of a tree trunk like an earth-toned ball gown: a damsel of decay.

While the volume of fungal frills – each with a velvety top, concentric bands of color and tiny pores in the white undersurface – was impressive, the bulk of the being was hidden inside.

Intertwined among the wood cells, hidden from view, the fine, white threads of hyphae (the actual body of a fungus) were hard at work. The tree itself was dead, and yet still full of life.

Turkey tails are a white-rot fungus, which means that they have the ability to decompose the major components of a tree. That’s not easy. Wood is tough because the cellulose and lignin molecules it’s made of are long chains of elements that are difficult to break apart. Lignin in particular gives wood its strength.

Do you remember learning about enzymes in your high school science class?

I chewed on a saltine cracker until it became sweet. Enzymes in my mouth broke down the long chains of starches until they became glucose, a simple sugar. In a similar, but external process, fungi exude a series of enzymes into the wood, and those enzymes split the chemical bonds of cellulose and lignin, resulting in shorter chains of glucose. The sugar dissolves in water, and fungal hyphae absorb it directly through their cell walls. Carbon dioxide is released to the air.

Because turkey tail and other white-rot fungi break down cellulose and lignin simultaneously but leave some of the cellulose for last, the wood they work on becomes soft, white and stringy. A large portion of the nutrients once trapped in the wood become available to cycle through the ecosystem again.

Bacteria jump in to use those nutrients, paper wasps turn the soft wood into nests and moose can even eat wood softened by artist’s conk fungi.

The next day, I headed back along that same trail with a group of Master Naturalists doing an activity called a Professor Hike. I picked a student with a sense of humor, stationed her by a stump, and made her a duct tape name tag that read: Professor Brown Cubical Butt Rot.
“This isn’t a disease caused by too much time in an office chair,” I joked. The name is real, and quite descriptive.

As the Professor explained to her classmates, this tree stump was being decomposed by a brown-rot fungus. Unlike the turkey tail, some fungi can only decompose the cellulose in wood cells, and the lignin left behind is brown. The fungus typically affects the bottom of a tree trunk, which in forester and logger lingo is the “butt.” But the cubical part of the name is most interesting.

Brown-rot fungi send hydrogen peroxide rapidly diffusing through the wood of a tree. The chemical modifies lignin just enough to get at the cellulose also in the cell walls and snips apart the long chains of cellulose into carbohydrates.

Two days later, once the destructive peroxides have dissipated, enzymes finish the job of turning the carbohydrates into sugar. The fungus absorbs it.

The process works more quickly than the totally enzyme-dependent decomposition by white-rot fungi, but leaves all the lignin on the table. The lignin-rich wood turns brown, shrinks, and cracks into roughly cubical pieces. Hence the name, brown cubical butt rot.

The “professor” bragged about her name all day – accidentally teaching about decomposition along the way.

We’re often tempted to turn everything into a competition. Are white-rot fungi superior because they can break down lignin? Or are brown-rot fungi better because they can work more quickly?
In fact, the first to arrive often has the advantage. And when the two types of fungi compete directly on the same log, brown-rot fungi win the short game by being able to access the energy in cellulose quickly, while white-rot fungi play the long game as they slowly access more of the energy stored in the wood.

In the end, the ecosystem wins. The rusty-colored crumbles of brown-rot fungi contribute to healthy soils with more capacity to hold moisture and nutrients. White-rot fungi, and especially competition between several different types of fungi, results in a tree being more thoroughly recycled and the materials becoming available for new growth.

Humans are also treated to delicious meals when the fungi fruit. My favorite – chicken of the woods – is a brown-rot fungus. Shiitake and oyster mushrooms; plus the medical turkey tails, are all white-rotters.
Lignin and cellulose; brown and white; death and life. In the end, they aren’t all that different.