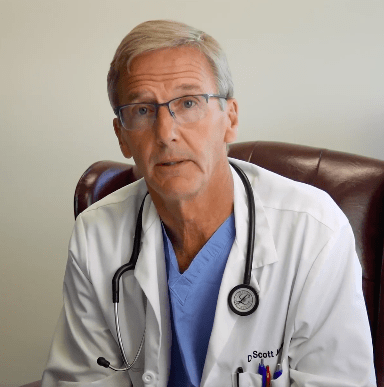 You really have to feel sorry for Republicans. It seems they are forever weighted down with big dumbbells.

And that is the biggest problem with democracy – any idiot can run for office, and far too often they do so as Republicans.

Take, for example, Scott Jensen, the “doctor” who is running as a Republican to govern the state of Minnesota.

Wow, the Republican party was really scraping the bottom of the barrel in putting this guy forward as their best hope to win. He smells like a loser from here.

It’s hard to tell if Jensen was born an idiot or if he just practices willful idiocy. It’s a common problem with Trumplicans – are they really as dumb as Trump, or do they just pretend to be that dumb to be accepted by their fellow numbskulls?

In the past weeks the idiot “Dr.” Jensen has been admonished by fellow doctors for trumpeting Trumplican views on Covid and other health issues that affect Minnesotans and all human beings.

Two dozen of his fellow doctors held a news conference to let the world know “Dr. Jensen’s views and recommendations are far out of step with science,” said Allina Health CEO Dr. Penny Wheeler at the press conference.

“Doctor Jensen has advocated for unproven therapies and when vaccines have been proven to save lives, he has minimized their scope and effectiveness. He even joined a suit to prevent children from receiving Covid vaccines,” infectious disease physician Dr. Peter Bornstein said at the press conference.

In July we ran a column by Dr. Hannah Lichtsinn, a primary care internist and pediatrician in Minneapolis and an assistant professor of medicine at the University of Minnesota, who wrote that Jensen should lose his license to practice medicine “based on his blatant disregard for medical ethics.”

She also wrote that Jensen “has repeatedly violated core tenets of medical ethics and responsible practice and engaged in conduct defined by Minnesota statute as cause for disciplinary action by the Board of Medical Practice, including engaging in conduct likely to deceive, defraud or harm the public.”

That’s what his fellow doctors think of him, but they are not alone in branding him a dangerous idiot.
Jensen was recently publicly admonished by a group of educators for spreading the half-witted Trump-clan hogwash about bizarre practices in public schools.

Here is the quote from the idiot Jensen that riled the educators enough to demand he apologize: “Why do we have litter boxes in some of the school districts so kids can pee in them, because they identify as a furry? We’ve lost our minds.”

Yes, some of us have lost our minds. In particular, it is Jensen and the other Republican idiots who spread such nonsense who have lost whatever tiny minds they were born with. Rather than exist in reality, they prefer to live in a Republican National Enquirer world, where they can share their grotesque fantasies about the bizarre things they believe non-Republicans get up to.

There are also Hitlerian shades of facsism in the way Jensen and his idiotic ilk believe if you repeat a lie often enough, it becomes truth.

While there are plenty of other examples of this fellow’s failure to measure up to the grand task of governing Minnesota, there’s no need to waste much more time and space on this guy.

I look forward to his small asterisk in history when he is crushed in a landslide next month, because, surely, no one is stupid enough to vote for this idiot.